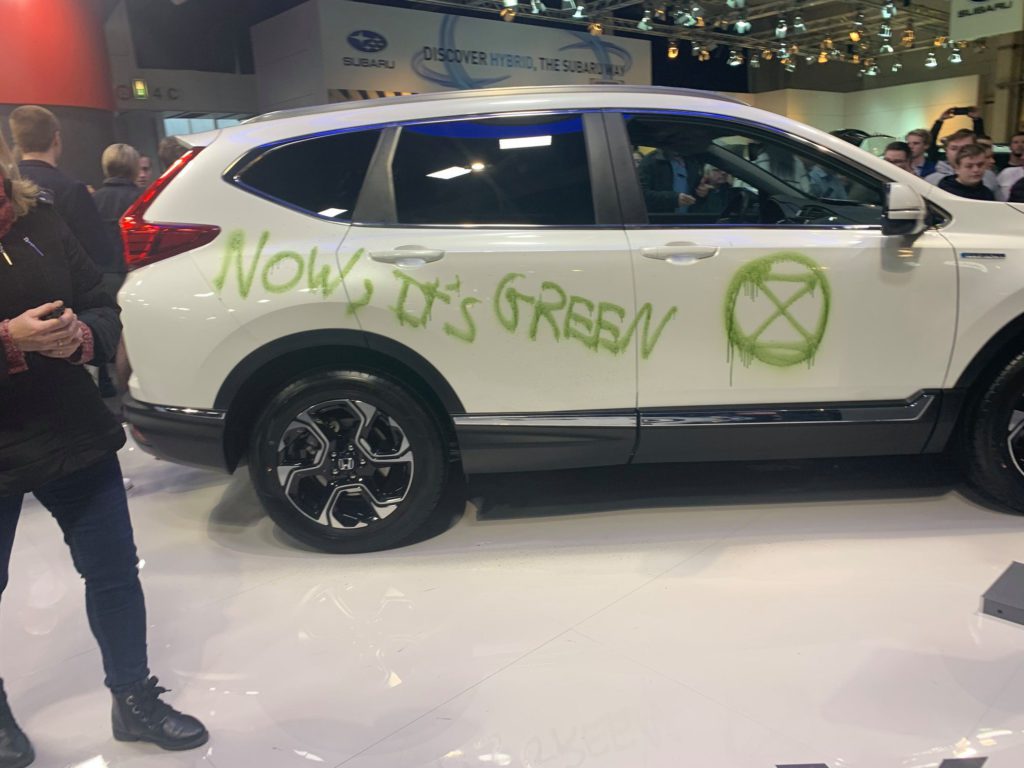 20 January 2020 Extinction Rebellion protestors have targeted the Brussels Motor Show, with demonstrations and vandalism taking place both outside and inside the event. Images from the group’s Belgium Twitter and Facebook pages show vehicles covered in paint and graffiti; protestors chained to cars and others in masks standing or lying in front of stands. The demonstrators are calling the event the â€²Salon of Lies’ and encouraging people to â€²stop supporting an industry which is poisoning our children and driving ecological breakdown.’ So far, police at the show have arrested 185 protestors. The Brussels event is the first large European automotive event of the year. Deceit apparent The environmental direct action group accuses motor manufacturers of lying by stating their advanced position on the development of electric vehicles while still producing highly polluting SUV models. They also say carmakers are hiding the damage that scaling up the production of EVs is doing to the environment. â€²We don’t trust the car industry to provide solutions on mobility or ecology,’Â says Lyllou Christine from Extinction Rebellion.Â ‘If the car industry wants to be part of the solution to the climate and ecological crisis as they pretend, then they should be doing all they can to help a fundamental and democratic change in the way we perceive and practise mobility. New, large, powerful individual cars, whether powered by petrol, electricity, or whatever other type of energy source must no longer be made the symbol of human freedom and accomplishment: they are in reality one of the balls and chains which are holding us back.’ Pictures also show members of the group dressed in masks made from the Royal Dutch Shell logo, blocking access to their stand at the show. Others depict protestors staging a â€²die-in’, laying down and blocking pathways and access to the event. Some protesters scaled the outside of the exhibition building to unfurl a banner over one carmaker’s advert, advising people to â€²open your eyes’. Contradiction An Extinction Rebellion press release issued on 6 January states: â€²Salon of Lies does not aim at blocking the fair, nor at targeting the visitors themselves. On the contrary, by telling the truth about the false image car companies give of themselves, Extinction Rebellion sides with all victims of the industry’s noxious practices.’ However, it is clear from the images that the actions of protestors is in direct contradiction to the statement, with some climbing up on displays and others chaining themselves and lying in the doorway to the event, preventing members of the public from accessing the show. It is this action that has led to arrests. The IAA Frankfurt stepped up security last year after threats of disruption by a group calling themselves â€²Rocks in the Gearbox’. Protests in the city prior to the show included the vandalism of several luxury car dealerships. The protests come just days after the European Union announced plans to fund its Green Deal, a document that relies heavily on automotive industry reforms to help the continent achieve net-zero emissions by 2050.
Region Europe/EU