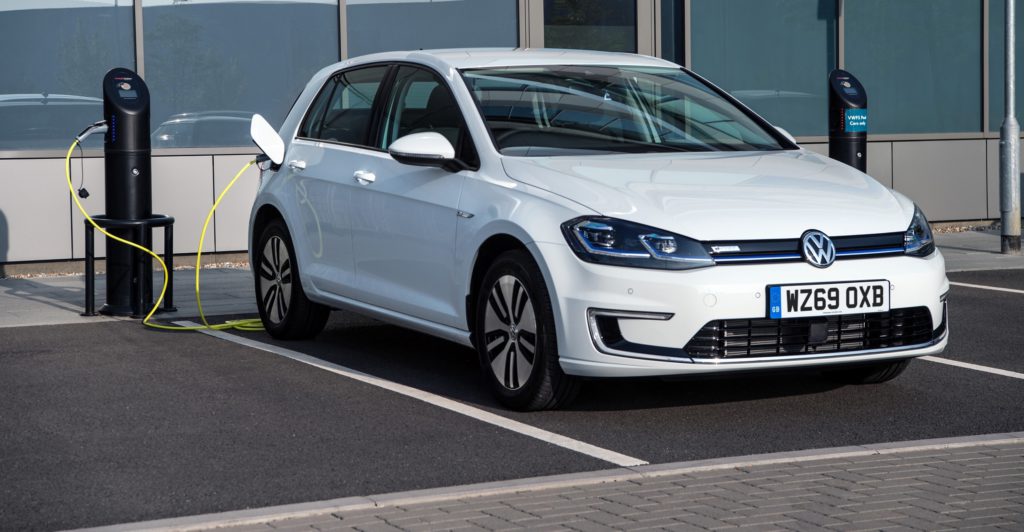 23 June 2020 In a new initiative, Autovista Group has created a dashboard comparing the retail prices (including taxes) and total cost of ownership (TCO) of leading C-segment battery-electric vehicles (BEVs) in France, Germany, Spain and the UK. Senior data journalist Neil King discusses the findings, which crucially reveal that C-segment BEVs are only competitive because of government incentives. If they are withdrawn, or are not in place at all, list prices of BEVs will need to be lower for them to gain momentum. Under normal circumstances, the price positioning of C-segment BEVs (BMW i3, Hyundai Ioniq-e and VW e-Golf), at around â‚¬40,000 (Â£35,000 in the UK), means they struggle to be competitive from a cost perspective. Government subsidies in France, Germany and, to a lesser extent, the UK, help to close the pricing gap. Nevertheless, the BMW i3 and Hyundai Ioniq-e are still 21% and 5% more expensive respectively than our reference petrol model, the VW Golf VII, in France. In Germany and the UK, the price premium for both models is reduced to about 10% and 20% respectively. Only if attractive list price positioning, such as for the run-out e-Golf that costs less than â‚¬35,000 (just over Â£30,000 in the UK), is combined with healthy government support, can C-segment BEVs compete with petrol-powered rivals. â€²OEMs need to leverage the government incentives but make an effort to bring list prices down over the next 12-18 months,’ commented Christof Engelskirchen, chief economist at Autovista Group. Competitive TCO â€²on paper’ Pricing data is provided in the local currency for the same five models in each market, including retail list prices (including taxes), incentives, discounts, and a final adjusted retail price. The TCO is calculated as the sum of total acquisition costs and total utilisation costs. Acquisition costs cover depreciation, financing and acquisition taxes. Total utilisation costs consist of servicing, fuel, wear, tyres, insurance, and utilisation taxes. The TCO of C-segment BEVs is competitive with internal combustion engine (ICE) powered cars in both the 36 months/45,000 km and 36 months/60,000 km scenarios (36 months/30,000 miles and 36 months/45,000 miles in the UK) – except in Spain, where government subsidies are not available. However, this is only â€²on paper’, as buyers can often negotiate significant discounts on ICE competitors. For this reason, TCO calculations are also provided with discounts of 10% and 20% applied to ICE models, i.e. the 1.5 litre petrol VW Golf in this analysis. 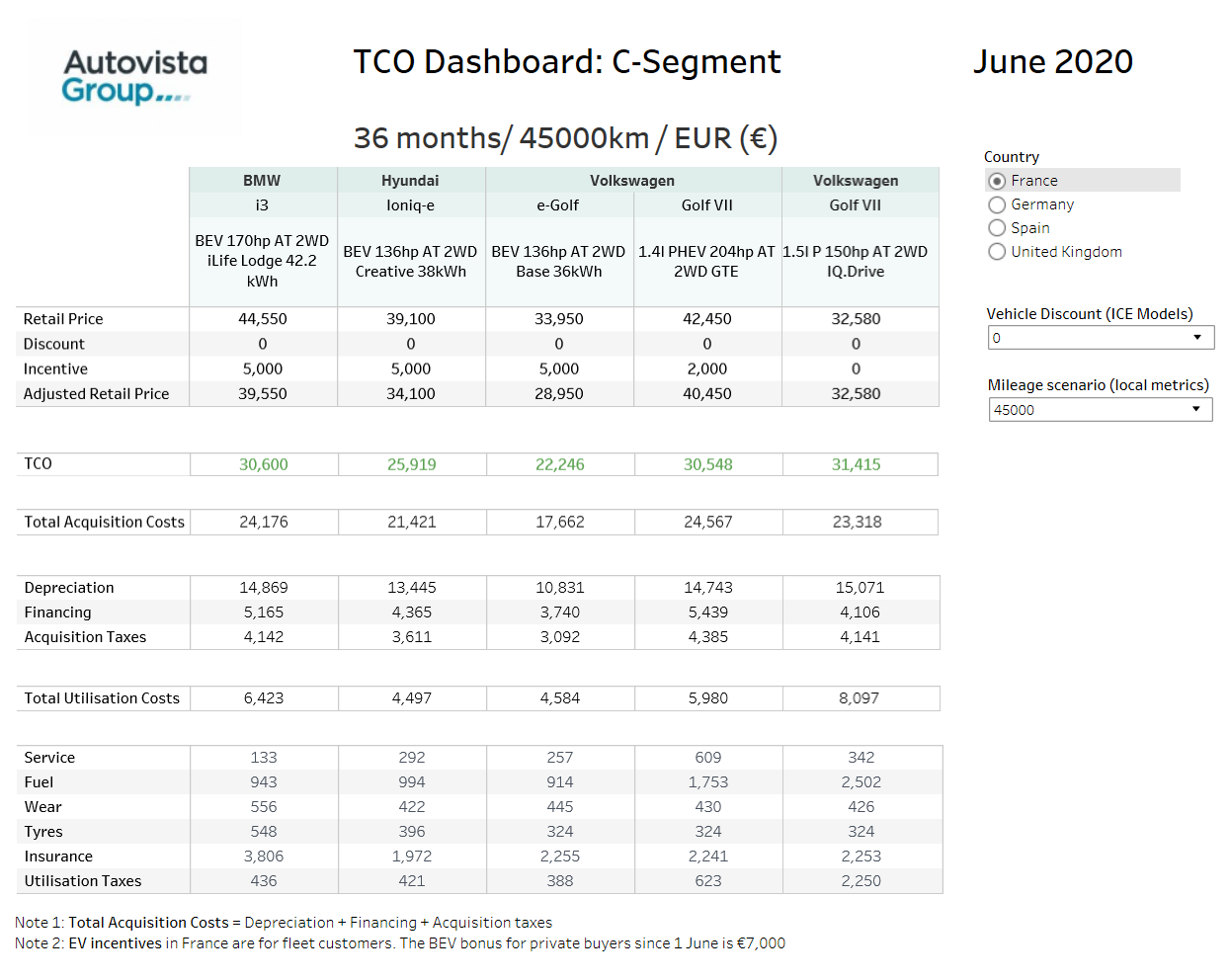 Incentives and lowered list prices boost e-Golf The VW e-Golf is the TCO champion in all four markets except Spain, the only country where it is not eligible for incentives. The petrol version of the Golf VII, which is at the end of its life cycle, would need a 20% discount in the UK to be competitive and even higher discounts in Germany and France. This also assumes no negotiation of discounts for the e-Golf variant. However, it must be noted that the e-Golf has the lowest adjusted retail price of all models under review in France and Germany. Aside from benefitting from the incentives in these markets, VW lowered the retail price of the e-Golf after announcing prices for its new BEV contender in the C-segment, the ID.3. Despite the lower retail price and the Â£3,000 incentive for BEVs in the UK, the adjusted price is over Â£1,000 higher than for the petrol Golf.  However, lower depreciation and utilisation costs compensate for the model’s higher purchase price. â€²Considering the strong price decrease of the e-Golf, the car is now far cheaper than the petrol version after the incentive. Despite higher residual values on the petrol version, the lower price reduces the gap with the electric version. But you should also keep in mind that the Golf petrol is now at the end of its life cycle and is offered with discounts of 25% to 30%,’ commented Yoann Taitz, operations director of Autovista Group in France. Ana Azofra, head of valuations and insights at Autovista Group in Spain reiterated this point. â€²The price of the e-Golf was drastically reduced by over â‚¬6,000 in November 2019, from â‚¬39,430 (including taxes), in an attempt to improve the brand’s attractiveness and position in leasing companies and with private buyers.’ Increasing incentives France introduced new incentives on 1 June, with the bonus for BEVs now at â‚¬5,000 for fleet users instead of â‚¬3,000, as shown in the TCO dashboard. For private buyers, the BEV subsidy is â‚¬7,000 instead of â‚¬6,000. For both private and fleet buyers, the subsidy is still â‚¬3,000 if the car is priced over â‚¬60,000 (including taxes). For plug-in hybrid (PHEV) models, such as the VW Golf GTE featured in the analysis, there is now also a â‚¬2,000 bonus. Similarly, from 1 January, Germany increased its incentives for BEVs costing up to â‚¬40,000. The one-off payment rose from â‚¬4,000 to â‚¬6,000 and for models costing between â‚¬40,000 and â‚¬65,000, the incentive is now â‚¬5,000. PHEVs also benefit from the scheme too and are now eligible for a â‚¬4,500 subsidy. The incentives are provided in equal halves by the German Government and the carmaker. From 1 July, the governmental element will double to â‚¬6,000 for BEVs and hydrogen fuel-cell electric vehicles (FCEVs) costing less than â‚¬40,000. When paired with the manufacturer bonus of â‚¬3,000, customers will be able to save â‚¬9,000 on zero-emission cars. Meanwhile, BEVs and FCEVs costing above â‚¬40,000 but below â‚¬65,000, like the Audi e-tron, will be eligible for â‚¬5,000 in government subsidies, alongside a â‚¬2,500 OEM bonus. PHEVs costing â‚¬40,000 or less will be eligible for an increased federal contribution of â‚¬4,500 and the manufacturer bonus of â‚¬2,250. Where they cost â‚¬40,000 to â‚¬65,000, they will receive a â‚¬3,750 government subsidy and a â‚¬1,875 OEM bonus. These incentives will be available until December 2021. Lower list prices for long-term competitiveness Given the incentives offered in the other major European markets, it is clear that Spain requires incentives to make BEVs competitive from a TCO perspective. â€²Before the coronavirus crisis, the only possible approach in Spain was to provide incentives for greener vehicles, as their price is still very high and remains one of the two main barriers. The second important barrier is to make progress in the deployment of charging infrastructure, which is currently completely insufficient,’ said Azofra. â€²From what I have heard about the Government’s discussions with the associations, they could now extend scrappage schemes and/or incentives to combustion engines, but only for one year to help the sector out of this crisis. The plan is to return to exclusive support for electric vehicles but there is nothing official about this yet. The Government is being heavily criticised for its lack of support for the automotive sector and this may affect the negotiations concerning subsidy schemes,’ Azofra added. The upshot is that incentives may provide a short-term boost but they are not available everywhere, such as in Spain, and will ultimately be withdrawn even where they do exist. A reduction in the list prices of BEVs is the only long-term solution to make electromobility viable from a TCO perspective. Click here or on the screenshot above to view the pricing and TCO dashboard for the C-segment models under review in France, Germany, Spain and the UK. A new TCO dashboard will be created and published bi-monthly. The next dashboard and analysis will focus on the B-segment.