Can graphene give a glimpse into the automotive future? 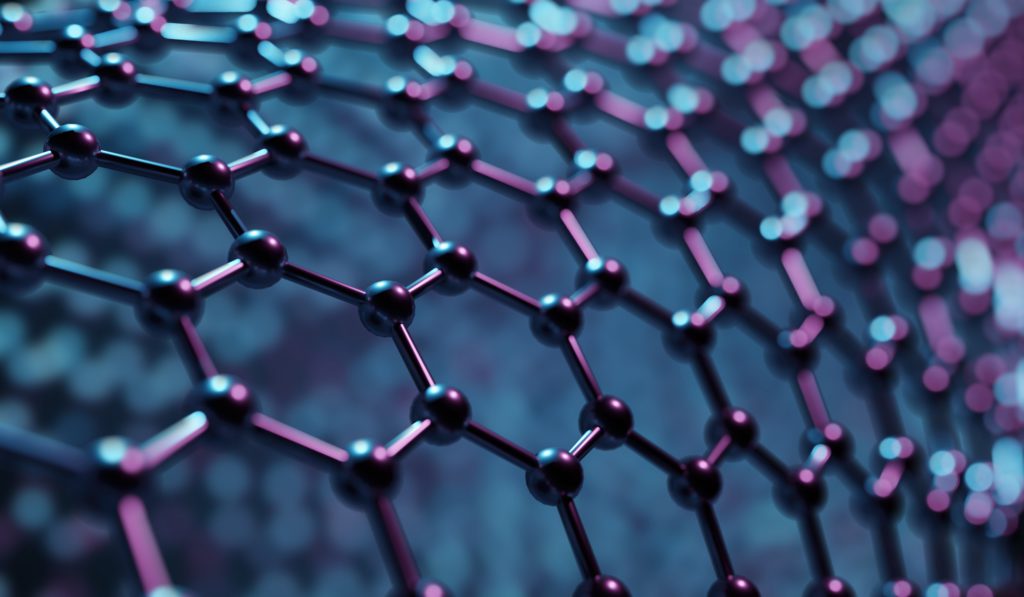 The automotive industry looks to have reached a critical evolutionary step. Emerging from a mechanical mindset, vehicles are undergoing a process of electrification and digitalisation. As this fresh era of design expands, new materials are also erupting onto the scene. Daily Brief journalist Tom Geggus examines the potential of one such material; graphene.

When considering the construction of vehicles throughout the 20th century, particular materials spring to mind. Ford’s Model T was shaped by steel, GM engineered aluminium into its engines and Renault made progress with plastic. But as vehicles become smarter, so do the materials which go into their production. One new source of innovation for carmakers looks to be graphene.

So what is this new wonder material? Graphene is a one-atom-thick layer of carbon, arranged into a hexagonal lattice. While scientists have known about its existence for years, they were unable to extract it from graphite, the same mineral used in pencils.

But that was until 2004, when two professors from the University of Manchester, Andre Geim and Kostya Novoselov, made a Nobel Prize-winning discovery, with little more than a roll of sticky tape. The two would often hold ‘Friday night experiments,’ venturing into experimental science that was not necessarily linked to their day jobs.

Armed with their tape, the pair removed flakes from a lump of graphene. Realising some samples were thinner than others, Geim and Novoselov began separating fragments repeatedly. Eventually, they were left with carbon flakes only an atom thick.

This means the graphene can be stretched along its length and width, but at an atom thick it cannot be manipulated on its third dimension, making it two-dimensional (2D). To put this into perspective, it is one million times thinner than the diameter of a single human hair.

While the sticky tape method opened the door to the discovery of graphene, it is not workable on an industrial scale. Instead, alternative methods like chemical deposition are now being used to extract the material en masse.

Now, Graphene@Manchester leads the business-based development of the material at the University. Based in the UK, this includes the National Graphene Institute (NGI) and the Graphene Engineering Innovation Centre (GEIC). NGI brings together the scientific elements while GEIC deals with prototypes for pilot productions.

Because it is 2D, the material has unique properties that set it apart from 3D ones. ′So you often refer to what’s called the graphene superlatives, and you hear things like 200 times stronger steel,’ said Baker. ′It’s more conductive than copper. It’s both electrically and thermally conductive, it’s stretchable, it’s flexible, it’s transparent.’

Used as an additive, the material can improve multiple elements of vehicles. When combined with rubber, it could potentially give a tyre both durability and grip, Baker explained. This could mean no more trade-offs between longevity and traction. One company, SpaceBlue, even looks to recycle tyres after they have reached the end of their life, by converting them into hardwearing floor mats, which have been enhanced with tiny amounts of graphene.

The 2D material can also be used to form compounds with other elements of a car to make it lighter. GEIC partner Briggs Automotive Company built the Mono, ‘the first production car in the world to fully incorporate the use of graphene-enhanced carbon fibre in every body panel’. The material improved the structural properties of the fibre to make the supercar’s panels stronger and lighter, while also significantly improving the car’s mechanical and thermal performance.

Ford ran trials to see how the material could be used in components like fuel rail covers, pump covers and front engine covers. The carmaker also looked to reduce noise inside of its vehicles by mixing graphene with foam constituents. Tests carried out by Ford and suppliers revealed an approximate 17% reduction in noise, a 20% improvement in mechanical properties, and a 30% enhancement in heat endurance properties, compared to a non-graphene foam. 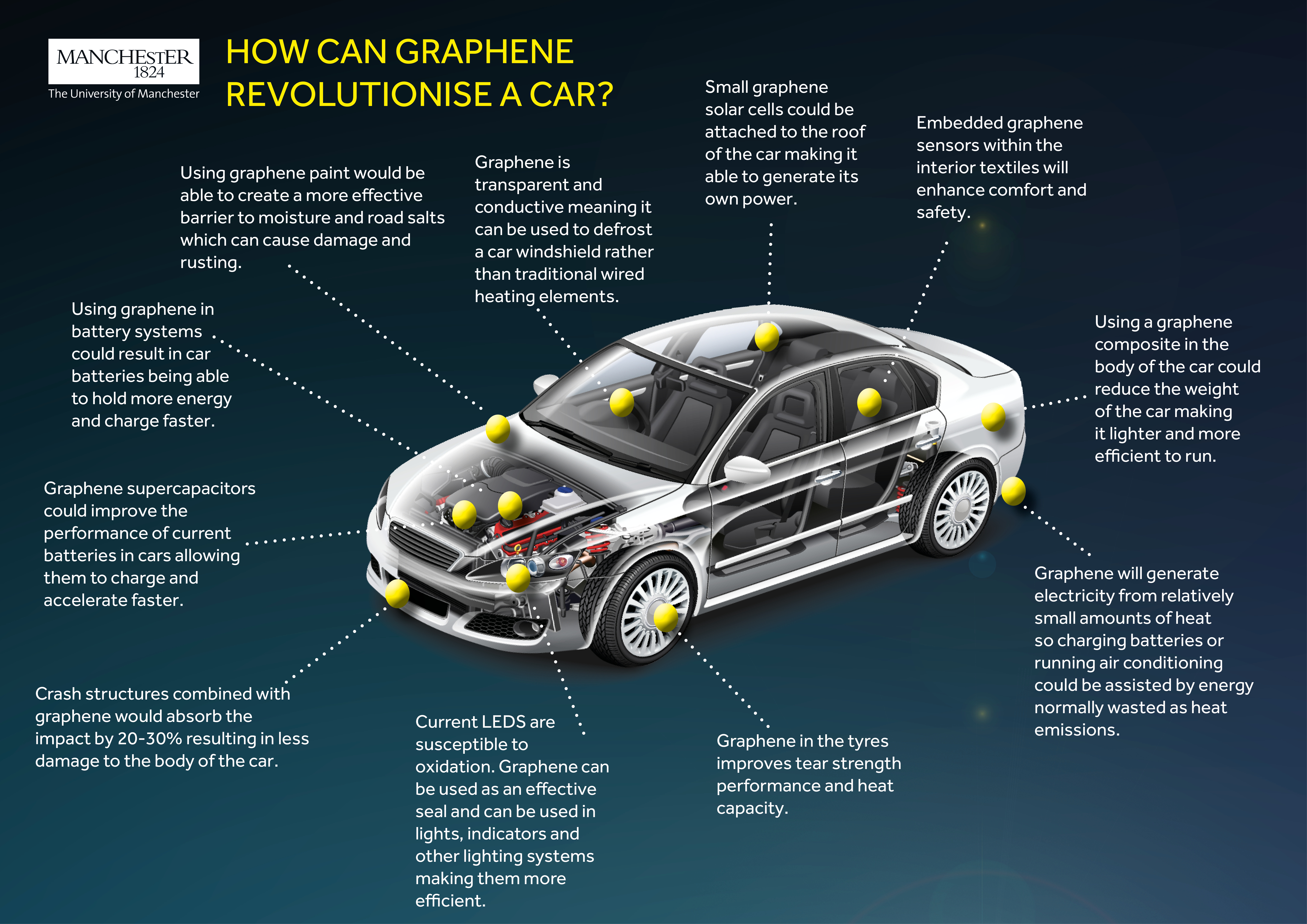 Even outside of the car, the material could help make a difference to motorists. Responsible for the UK’s motorways and major roads, Highways England is working with GEIC to explore the additon of graphene to bitumen in road surfaces. The aim is to make roads not only hard-wearing but flexible when it comes to extreme weather. If surfaces are able to expand and contract to adapt to hot and cold conditions, the likelihood of potholes would decrease, alongside the potential for damage to vehicles.

But how does graphene play into current automotive trends? As the industry experiences an electrified undercurrent, pulling vehicle development towards e-mobility, a material which decreases weight could be essential.

Baker explained that ′light-weighting’ is a key challenge with electric cars as they get progressively heavier. This process can help shed weight from all over the car, including the interior, with plastics and fabrics being made thinner and lighter. The less an electric vehicle (EV) weighs, the less work the motors will have to do and the more efficient the car will become. Graphene can also be added to battery elements, such as the casing, to make it lighter and tougher, as well as more thermally conductive.

Ultracapacitor specialist Skeleton Technologies, also recently partnered with the Karlsruhe Institute of Technology, to complete the development of a graphene ′SuperBattery.’ With a 15-second charge time, the unit would also be capable of charging cycles counted in hundreds of thousands. The company claims this makes it ′a perfect solution for the three main issues affecting electric vehicles: slow charging times, battery degradation, and range anxiety.’

Discussing the potentially disruptive areas graphene might one day impact, Baker considered whether a vehicle’s structure could itself store energy. This could mean a car’s door or floor panels taking the place of a battery pack. However, he acknowledged the challenge with an idea like this would be dealing with a potential collision, and what would happen if a panel became damaged.

Going forward, Baker believes the wonder material is more likely to be crucial to the development of a new type of supercapacitor. This could allow vehicles to be equipped with a relatively smaller battery for range, which is then supplemented with a supercapacitor used for acceleration. For taxis and buses, which do a lot of stop-start driving, this split would be ideal as they would receive better range and performance from a supercapacitor that can recharge through braking.

Getting any graphene product into the market place requires jumping two major hurdles, Baker said. First, there is the development of the product itself, then secondly obtaining all the necessary certificates and coming into line with regulations. For a safety-critical product, this could mean roughly two to five years to get the required performance, and then a similar time scale to get the product certified. Meanwhile, simpler, non-safety related items could reach the market in 12 to 18 months.

However, with targeted investment, Baker believes certain areas of development could undergo acceleration. With countries looking to lower their carbon outputs, any technology capable of assisting the reduction of emissions would be well received. As environmental necessity continues to drive change, graphene could start shaping more of the automotive industry before too long. If used to its full potential, the 2D material could make its predecessors, like steel, aluminium and plastic, seem outdated, old-fashioned and one-dimensional.

Images courtesy of the University of Manchester.