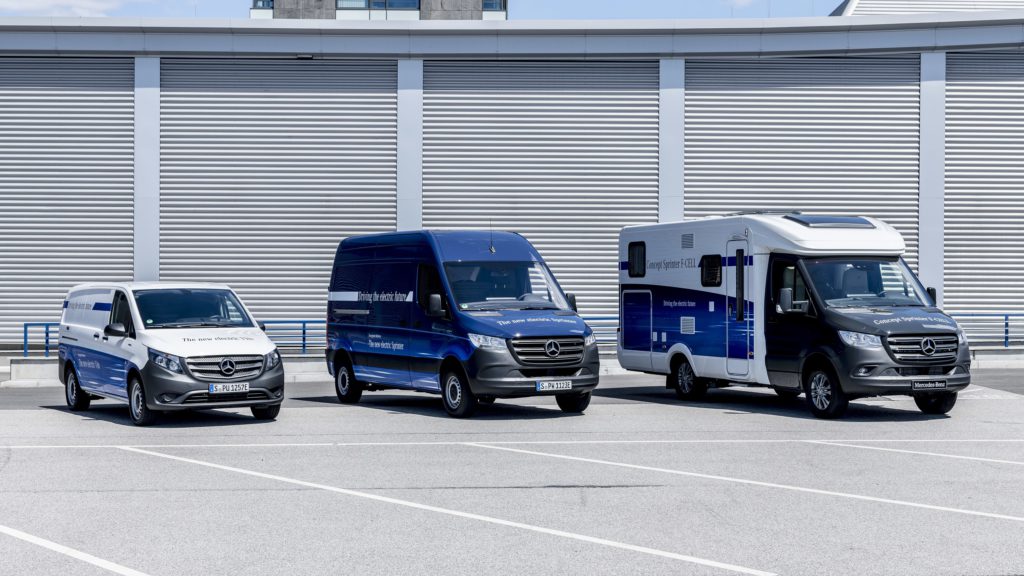 Daimler has been preparing for the IAA Commercial Vehicle show taking place in Hanover in September by showing examples of new electric and hydrogen models, some of which will be available following the show.

Two models, in particular, have received attention, a new eVito electric van, and a hydrogen concept built into a motorhome body.

The company’s new Mercedes-Benz eVito is built mainly for deliveries in an urban environment. However, the company believes its range and load capacity also meet the demands of tradespeople and service technicians. An installed battery capacity of 41kWh delivers a range of around 150 kilometres. Even when conditions are unfavourable, the manufacturer states that customers still have a range of 100 kilometres. The full range is restored after six hours of charging.

The battery-electric drive generates 84kW and up to 300-newton metres of torque, which Daimler says is tailor-made for urban use. The top speed can be adapted to the given use case. If the eVito is driven largely in city-centre environments, a top speed of 80 km/h conserves energy and increases the range. Alternatively, it can be configured for a top speed of up to 120 km/h.

However, the most interesting concept is the company’s Sprinter F-CELL, a hydrogen fuel-cell electric motor built into a motorhome.

The concept aims to highlight the need for alternative forms of propulsion with increased range. Those who use motorhomes often travel hundreds of miles at a time and therefore a long period of charging is not a desirable option. By building the concept into a motorhome, the unit also stands out amongst other show vehicles.

In a statement, Daimler says: ′More than ever before, Mercedes-Benz Vans is making the selection of the right powertrain concept dependent upon customer benefits. Besides vehicle technology, this also takes into consideration system weight, charging or refuelling time, range and commercial economy. Looking to the future, Mercedes-Benz will enhance the eDrive@VANs strategy with the fuel cell. The Concept Sprinter F-CELL uses the example of a semi-integrated motorhome to show the full breadth of the characteristic benefits of a fuel cell, from long range to zero-local-emissions mobility. These are characteristics that are also ideally suited to other use cases such as longer courier routes or minibuses in inter-urban operation.

The Concept Sprinter F-CELL combines fuel cell and battery technology in a plug-in hybrid. The intelligent interaction of battery and fuel cell delivers an electric output of around 147kW and 350-newton metres of torque. The three tanks in the substructure store a total of 4.5 kilograms of hydrogen and facilitate a range of around 300 kilometres. If a longer range is required, another tank at the rear of the vehicle can be added, lifting the range to as much as 530 kilometres.’