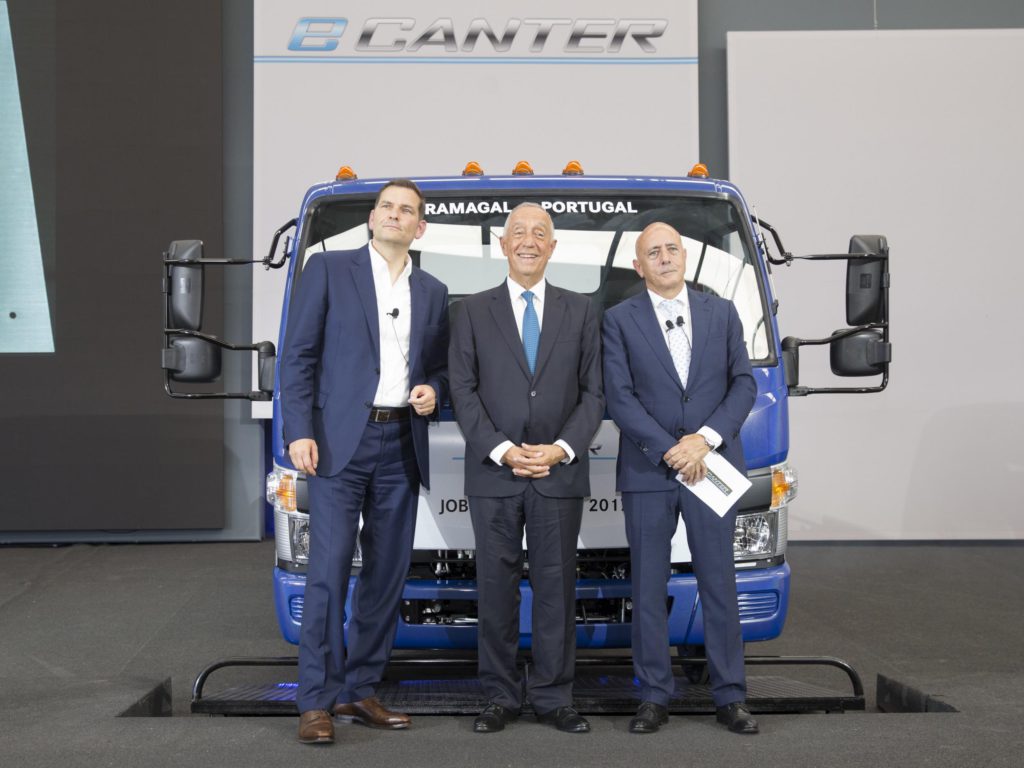 Mitsubishi Fuso Truck and Bus Corporation (MFTBC) celebrated the start of production of the world’s first all″‘electric light-duty truck, the Fuso eCanter, on Thursday (27 July). The event was held at the production plant in Tramagal, Portugal, which became part of Daimler AG in 2003 after the company acquired the majority share of Mitsubishi Fuso.

After unveiling the first charging station for trucks in May and starting production at the Kawasaki plant in Japan on July 7, Thursday’s event celebrated the beginning of manufacturing of the eCanter outside of Japan. The truck is produced at the Tramagal plant, where all eCanter trucks for the European and US markets will be produced in line with the conventional Fuso Canter.

The all-electric light-duty truck is Fuso’s answer to the public’s need for a zero-emission and zero-noise truck for inner-city distribution. The eCanter has a range of 100 kilometers and a load capacity of two to three tons – depending on body and usage. The vehicle’s electric powertrain contains six high voltage lithium ion battery packs with 420 V and 13.8 kWh each. In comparison with a conventional diesel truck, it offers savings on operating costs of up to €1,000 per 10,000 kilometres.

Marc Llistosella, President and CEO of Mitsubishi Fuso Truck and Bus Corporation and Head of Daimler Trucks Asia said at the occasion: ′With today’s start of production of the eCanter, we become the first global manufacturer to produce an all-electric truck in series. From now on we can address the growing demand for locally emission free delivery trucks in Mega-Cities. We already received the first customer orders and will mark the global launch of this truck in one of the most iconic Mega-Cities, in New York, this September. Our Portuguese plant does not only produce the trucks for Europe and the US, we also benefit from a close cooperation with the authorities in Portugal and Lisbon testing the trucks there since 2014.’