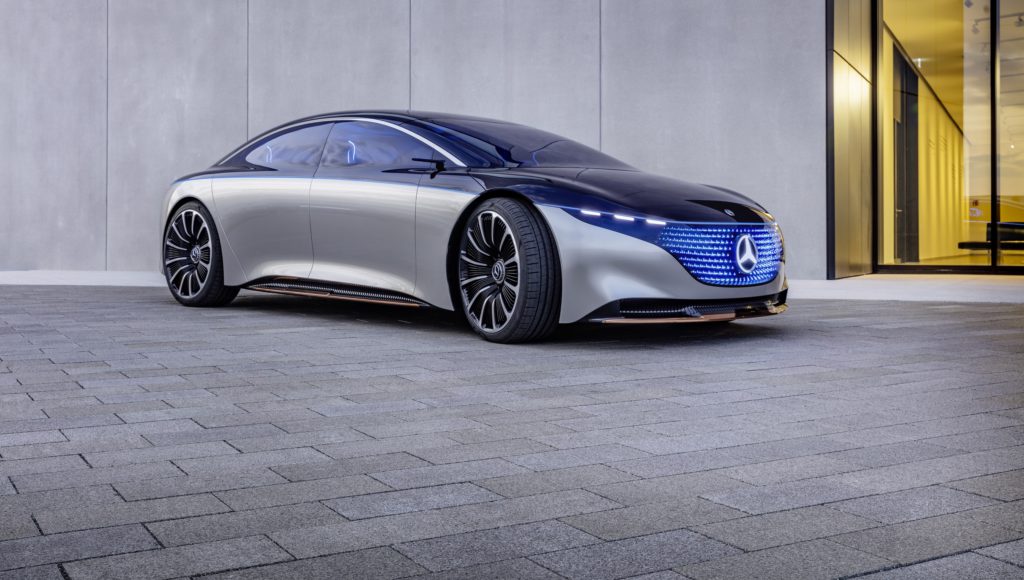 This month marks 120 years since Mercedes adopted its namesake. The first vehicle to take up the mantle was the Mercedes 35 PS, which won several races at Nice race week in 1901. The early automobile featured advanced technology for its time alongside progressive design features. Daimler has come a long way since 1900, but how is the carmaker preparing for the next 120 years? Autovista Group Daily Brief journalist Tom Geggus finds out whether Daimler’s future contains more ground-breaking cars like the 35 PS.

Readers of Daimler’s 2019 annual report can be left in no doubt as to where the manufacturer sees itself heading. They do not even have to open the document. There on the front cover is the Mercedes-Benz Vision EQS. First revealed at the 2019 International Motor Show (IAA) in Frankfurt, the EQS is Mercedes preview of the future of large electric luxury sedans. According to the manufacturer, it focuses not just on the need for mobility, but luxury.

As the first EQ model to be based on the electric-vehicle architecture (EVA), it could be a major milestone for the production of more sustainable alternatively-powered Daimler vehicles. The EQS uses the variable modular electric system to power motors at the front and rear axles. This equates to an output of 350 kW and roughly 760 Nm of torque, allowing the EQS to accelerate from 0-100kmh in under four and a half seconds. Under WLTP standards, the car is capable of covering 700km and can charge up to 80% of its battery in less than 20 minutes (at a 350kW charge point).

The vehicle’s interior is a blend of traditional and technologically pioneering materials. Artificial leather in the side sills sits alongside crystal white microfiber seats. The ceiling contains a proportion of ′ocean waste’ plastic, and maple from ecologically-managed German forests makes up the wooden trim.

′Our job now is to redefine the modern luxury of Mercedes. And there can be no doubt that desirable, contemporary luxury has to be sustainable – but also sustainably fascinating,’ said chief executive Ola KÃ¤llenius.

Outside of the Mercedes brand, last year Daimler established a 50:50 joint venture to develop and operate the Smart brand with majority shareholder Geely. Slated to become an electric-only brand, the new generation of Smart models will be built in China. Having only sold 107,000 units in 2019, a decline of 18% compared with 130,000 in 2018, this renewed interest in Smart will probably come as a relief to Daimler, which was considering the future of the brand last year.

This new generation of Smart cars is due to go on sale in 2022, and the Mercedes EQS is reported to be hitting showrooms from 2021. If both of these targets can be achieved, in the short term Daimler will be off to a good start, offering more sustainable electric vehicles in the near future.

Under Daimler’s ′Ambition 2039′, the manufacturer wants the Mercedes new car fleet to be CO2-neutral by 2039. In only 10 years, the company plans for more than half of its car-unit sales to come from plug-in hybrids or fully-electric models. All-electric vehicles can be expected to account for up to 25% of the Mercedes portfolio by 2025. By 2022, the carmaker wants to electrify its entire portfolio, offering electric alternatives in every segment. But to achieve this, Mercedes is not tying itself exclusively to fully-electric vehicles. Instead, it will run a wider gambit of power-trains to meet various needs.

′In the coming years, the focus will be on battery-electric drive,’ KÃ¤llenius said in an interview for the 2019 annual report. ′But it’s not possible today to predict with certainty the technology that will best serve the customer needs of tomorrow and the day after. We therefore remain open for all types of drive systems.’

This leaves the door open for Mercedes to continue developing its internal combustion engines (ICE). The carmaker believes that new vehicles with ICE will continue to play a role in the medium term. It will therefore keep working on conventional engines in line with the next stage of EU certification. This process should be concluded over the next few years, after which a significant drop in the development of ICE can be expected.

One beneficiary of both ICE and electric-drive development will be the manufacturer’s plug-in hybrids (PHEVs). Alongside the EQS, Mercedes showcased 19 other vehicles at last year’s IAA, among them a range of hybrids. It featured three compact and two SUV derivatives with the third-generation hybrid drive train. One example was the A250 e, which has a combined fuel consumption of 1.5-1.41/100km, and combined CO2 emissions of 33-34 gkm. By the end of 2019, Mercedes had more than 10 PHEVs on offer, aiming to reach 20 hybrid model variants this year.

Mercedes’ alternative powered offensive also includes the GLC F-CELL, an SUV that can run on hydrogen as well as electricity, which was first delivered in November 2018. Since the spring of 2019, customers have been able to rent GLC F-CELL vehicles at one of the seven outlets in Germany.

By continually adding to its electric and hybrid offerings, Daimler’s need for electric components, in particular batteries, will keep growing. To meet this ever-increasing demand, Daimler is upping its production game.  Last year, Mercedes announced it will be building a battery factory in Jawor, Poland. This will expand the manufacturer’s battery-production network to nine sites. All in all, the company is investing more than €1 billion in a global battery-manufacturing network.

But this increased battery production will need to meet new stringent emissions targets. Mercedes-Benz plans for its plants to be CO2-neutral by 2022. By 2030, nearly all of their German sites will use electricity generated from renewable resources exclusively. The factory in Jawor, for example, will be CO2 neutral as of its commissioning. Power needs will be met entirely with electricity from renewable resources. Heating too will come from a plant directly adjacent to the site.

′Factory 56′ at the Mercedes-Benz plant in Sindelfingen is spearheading the efficiency charge with a new infrastructure. The production hall obtains its energy from CO2-neutral sources, including a photovoltaic system installed on the roof. ′Factory 56′ will serve as a blueprint for future vehicle-assembly operations.

So, in the short term, Mercedes will keep developing ICE capabilities and producing PHEVs. In the medium term, more fully-electric vehicles can be expected, manufactured sustainably at CO2-neutral plants. But what about in the long term?

At the 2020 Consumer Electronics Show, Mercedes unveiled the Vision AVTR. The self-driving electric concept shows off ′bionic flaps’ and a single contact point in the centre of the car, in place of a steering wheel. The new drive system, working alongside the axis arrangement, allows the AVTR to move forwards, backwards and diagonally. It is even capable of moving sideways by about 30 degrees in a ′crab movement’.

Whilst these novel features are exciting at first glance, the most interesting aspect of this concept is not visible. The AVTR uses battery technology developed with graphene-based organic cell chemistry.

′For the first time, its revolutionary battery technology consists of organic-cell chemistry based on graphene and thus does not use any rare, toxic or expensive materials such as metals’, explained Andreas Hintennach, head of battery cell research at Daimler.

The materials are compostable and therefore completely recyclable. This would mean electromobility can become independent of fossil resources, opening up the potential for a ′circular economy’ in the raw materials sector.

′Organic batteries are currently part of our fundamental research. It will still take several years until it can be established in Mercedes-Benz vehicles – but the potential is there!’ Hintennach concluded.

So, is the Vision AVTR Daimler’s next great milestone? If the concept does ever get produced, it is possible. But if the manufacturer could free battery production of its reliance on fossil fuels, the next Mercedes 35 PS will not be a car, but the component which powers it.