Autovista Group senior data journalist Neil King explores the December and full-year 2020 figures released by the European Automobile Manufacturers’ Association (ACEA). Second-wave lockdowns continued to suppress new-car registrations at the end of the year, but some markets were boosted ahead of tax changes from 1 January 2021.

The modest EU-wide downturn in December was expected as the double-digit year-on-year declines in France and Italy were counterbalanced with stability in Spain and growth in Germany.

In France, new-car registrations were 11.8% lower in December 2020 than in the same month of 2019. This is a significant improvement on the 27% contraction in November, the largest monthly decline in the country since May, as dealers reopened on 28 November following a lockdown.

New-car registrations declined 14.9% in Italy last month. Aside from restrictions in the country, the decline in December was also due to the exhaustion of scrappage incentives. Some consumers also postponed purchasing a new car as the Italian Parliament has approved an amendment to the 2021 Budget Law, which introduces new measures to renew the vehicle fleet with less polluting and safer cars.

In Spain, just 13 fewer new cars were registered than in December 2019, as consumers took advantage of the RENOVE scrappage scheme before it ended on 31 December. Similarly, the increase in vehicle-registration taxes from 1 January brought demand forward into the tail end of 2020. However, this is bitter-sweet for Spain as the new WLTP-based taxes will reduce demand, especially at the start of the year, and the market is expected to remain below one million units in 2021.

However, the government imposed a strict lockdown again, meaning car dealerships have been closed since 16 December. This initially applied until 10 January, but climbing infection rates have triggered an extension of the country’s lockdown measures until the end of January. This makes a positive start to this year seem even less likely as dealerships must remain closed, except for the service departments. While Autovista Group’s Schwacke expects to see a recovery to just under 3.1 million new-car registrations in 2021, it predicts figures will be below those in previous years, and significantly below 2019’s peak. 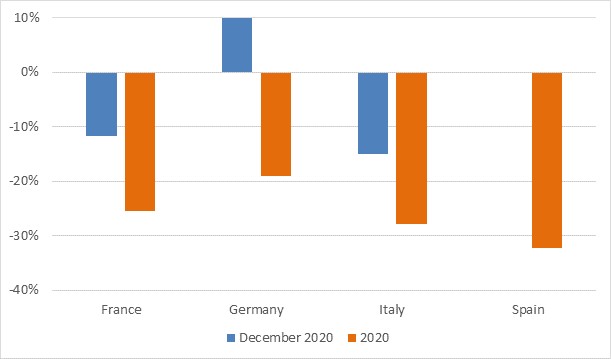 The majority of EU new-car markets contracted last month, but eight smaller markets posted growth, in addition to Germany. Double-digit improvements were achieved in Denmark, Ireland, Lithuania and Romania. However, year-on-year contractions of more than 25% were reported in five markets; Bulgaria, Croatia, Latvia, Slovenia and Sweden.

The modest market downturn in December naturally continued the improvement in the year-to-date contractions, which bottomed out at 41.5% in the first five months of the year. The greatest loss among major EU markets was in Spain, which contracted 32.3% in 2020, ahead of only Portugal (down 35.0%), Bulgaria (down 36.8%) and Croatia (down 42.8%).

The prevalence of COVID-19 infections, the severity, duration and geographic spread of lockdowns, and the economic fallout, will define how Europe’s new-car markets perform in 2021 and beyond.

The majority of the leading European carmakers registered fewer new cars in the EU in December 2020 than in December 2019. Mazda and Mitsubishi suffered the greatest losses, with registrations down by more than a quarter year on year. However, the Volkswagen Group registered 9.7% more cars in the EU during the month than in December 2019, in line with the German market’s growth. Fiat Chrysler Automobiles (FCA) and the PSA Group, merged now as the new firm Stellantis, also managed to post year-on-year growth, of 9.3% and 2.9% respectively, but Toyota was the strongest performer by far, increasing registrations by 21.9%.

All manufacturers endured double-digit declines in 2020 as a whole, with only four containing losses to less than 20%; BMW Group, Hyundai-Kia, Toyota and Volvo.

Across Europe, Autovista Group expected manufacturers with a strong electrified portfolio to perform comparatively well as consumers are less likely to be tempted by the used electric vehicles coming through. This is because they tend to be less price-sensitive buyers, but there is also limited availability of the latest hybrid and electric models on the used-car market. Toyota was the best-performing manufacturer in the EU new-car market, albeit with registrations down 12.8%, supporting this hypothesis.

Autovista Group has outlined its key predictions for the year ahead, focusing on new-car registrations, used-car demand and residual values, and tech advances.