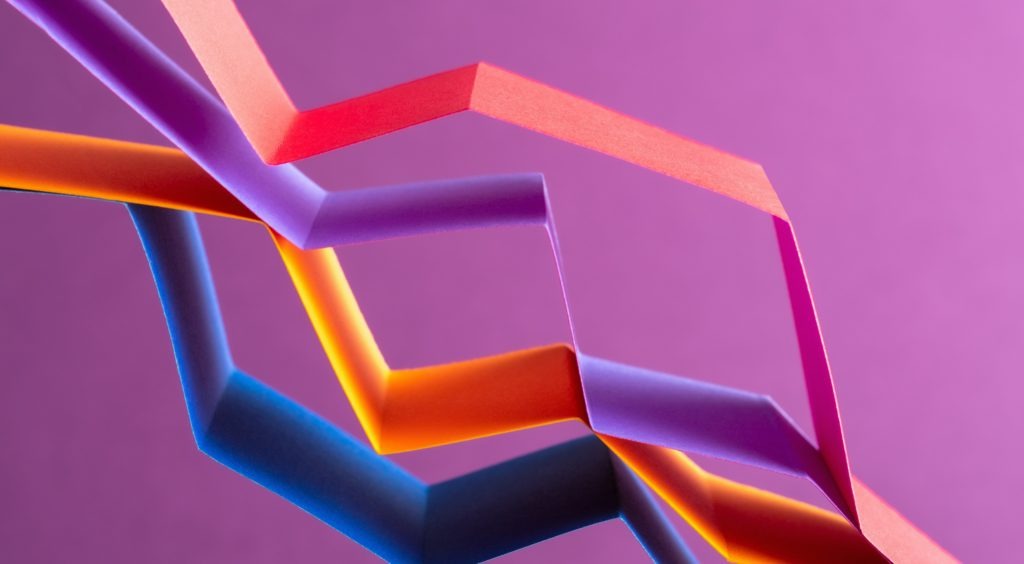 The new-car markets of France, Italy and Spain all shrunk by more than 25% in 2020. Autovista Group senior data journalist Neil King considers the December and annual figures.

Following the lifting of lockdowns in mid-2020, the new-car markets of France, Italy and Spain had shown signs of recovery. However, the resurgence of coronavirus (COVID-19) cases, restrictions and/or economic repercussions are suppressing demand, albeit inflicting far less damage than in March to May. Registrations declined again year on year in December in all three countries, according to data released by the respective automotive trade associations, and each market contracted by more than a quarter overall in 2020. 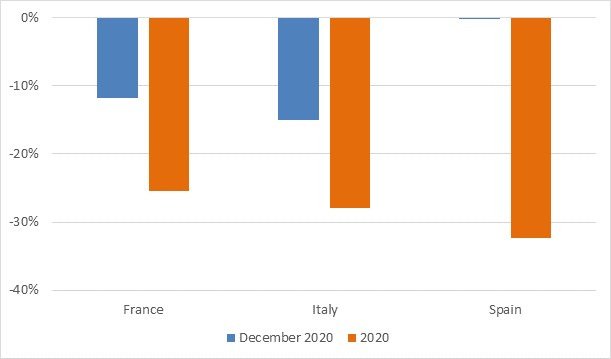 New-car registrations were 11.8% lower in France in December 2020 than in the same month of 2019, according to the latest data released by the CCFA, the French automotive industry association.

This is a significant improvement on the 27% contraction in November, the largest monthly decline in France since May, as dealers reopened on 28 November. Prior to this, dealerships were closed during the month and were only allowed to deliver cars that had already been ordered before the second lockdown. In the full calendar year of 2020, new-car registrations in France were 25.5% lower than in 2019

In Italy, the year-on-year downturn in December reported by the industry association ANFIA was 14.9%, and the result would have been worse (down about 19%) had there not been an extra working day. This is the third consecutive month that the country is back in negative territory following the 9.5% growth in new-car registrations in September due to the new government scrappage incentives that came into effect at the beginning of August as part of the Decreto Rilancio (Relaunch Decree). While the market still contracted in that month, demand improved but delivery times delayed many registrations until September. 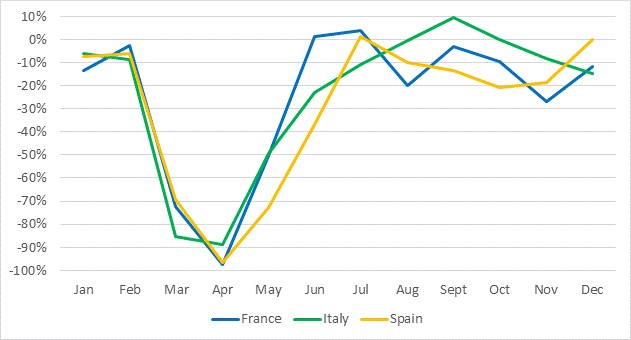 Aside from restrictions in the country, the decline in December is also due to the exhaustion of the scrappage incentives. The ongoing weakness in December confirmed the gloomy forecasts for the Italian new-car market, which contracted by 27.9% in 2020. ′We archive 2020 as the most difficult post-war year for our sector,’ commented ANFIA president Paolo Scudieri.

However, the Italian Parliament has approved an amendment to the 2021 Budget Law, which introduces new measures to renew the vehicle fleet with less polluting and safer cars.

′We look to 2021 with confidence, thanks to the measures that came into force with the start of the new year, on which there was an agreement between all the political forces, and that, in addition to supporting demand, will favour the restart of the industrial production of motor vehicles and components for the benefit of the entire automotive supply chain, with positive repercussions on employment levels and investments for green and digital transition,’ Scudieri said.

In Spain, 105,841 new cars were registered during December, just 13 units fewer than in December 2019, according to ANFAC, the Spanish vehicle manufacturers’ association. Despite this stability in the month, the new-car market contracted by 32.3% in 2020, with 851,211 units registered in the entire year. This is the first time the Spanish market has fallen below one million units since 2014.

The December figures were buoyed by consumers taking advantage of the RENOVE scrappage scheme before it ended on 31 December. Similarly, the increase in vehicle registration taxes from 1 January brought demand forward into the tail end of 2020. However, this is bitter sweet for Spain as the new WLTP-based taxes will reduce demand, especially at the start of the year, and the market is expected to remain below one million units in 2021.

Tania Puche, director of communications of the Spanish dealers’ association GANVAM, commented that ′the lack of political will to neutralise the impact of the WLTP on the registration tax makes us look sceptically at 2021. In an exceptional situation such as the one that has caused the pandemic, consumers need special incentives to continue with the necessary renewal of the fleet. It is probable that until the second half of the year we will not see a change in trend, when the impact of the vaccine on consumer confidence and the end of mobility restrictions will generate an environment of less uncertainty.’