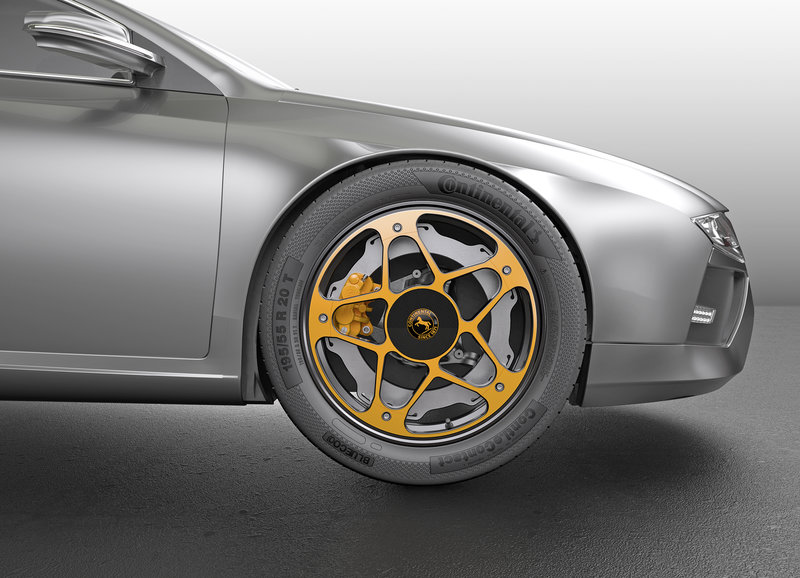 As development of electric vehicles (EVs) continues, unique issues come to light which require ingenious solutions to address them. As a result, manufacturers and suppliers are developing new technologies and ideas to ensure that the electric revolution keeps on at pace.

One such issue is the braking performance of EVs, which can be seen as inefficient. This is an area that tyre supplier Continental has been working on, with the development of its ′New Wheel Concept‘ to optimise performance. Its design is comprised of two aluminium parts, a carrier star permanently bolted to the vehicle hub, and a rim well, which is bolted onto the star.

Unusually, the wheel brake is fastened to the axle’s wheel carrier and engages from the inside with an annular aluminium brake disc. This in turn is bolted to the carrier star. The internal brake permits a wide braking surface, since the space available in the wheel is optimally utilised. The larger braking surface provides a better friction radius, allowing smaller and lighter callipers.

′In EVs, it’s crucial that the driver expends as little energy as possible on the friction brake,’ comments Paul Linhoff, head of Brake Pre-Development in the Chassis & Safety Business Unit at Continental. ′During a deceleration, the momentum of the vehicle is converted into electricity in the generator to increase the vehicle’s range. That’s why the driver continues to operate the brake pedal – but it certainly doesn’t mean that the wheel brakes are active too.’

After comprehensive testing, Continental predicts the brake disc itself will, unlike cast-iron discs, not be subject to wear. The explanation for this is the New Wheel Concept only inflicts abrasion on the braking pads. The design of this concept is also said to make replacing them – and the wheels – much easier.

The corrosion-free brake discs are made of aluminium and therefore provide a constant friction surface condition. This is an important prerequisite for electric vehicles, where friction brakes are not constantly in use.

As the first step, Audi and Hanergy want to integrate Alta Devices’ thin-film solar cells into a panoramic glass roof. In the future, almost the entire roof surface is to be covered with solar cells. The electricity they generate will flow into the car’s electrical system and can supply for example the air-conditioning system or the seat heaters – a gain in efficiency that has a direct positive impact on the range of an electric vehicle, the manufacturer said in a statement.

′The range of electric cars plays a decisive role for our customers. Together with Hanergy, we plan to install innovative solar technology in our electric cars that will extend their range and is also sustainable,’ stated Audi Board of Management Member for Procurement Bernd Martens.

Audi has been drawn deeper into the emissions scandal recently with recalls and prosecutor investigations, and is therefore looking to develop its EV range. The company aims to cut costs by about €10 billion by 2022 to help fund the shift. It is also looking to free up funds for investments in zero-emission technology by developing a new production platform with Porsche, allowing both VW brands to save money by sharing components and modules.