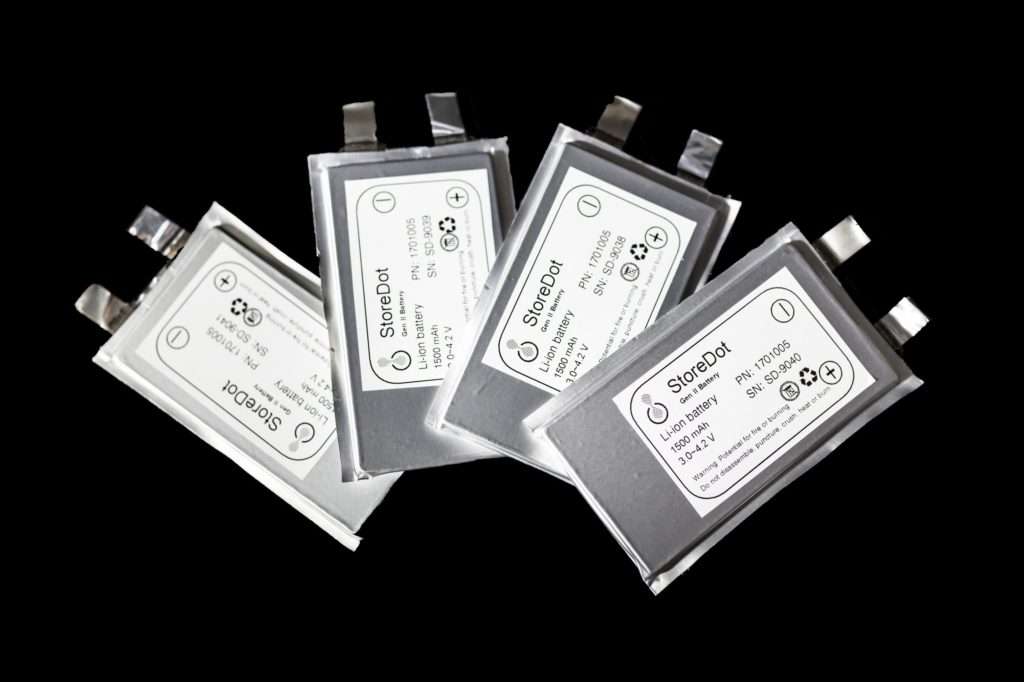 20 January 2021 Battery developer StoreDot has unveiled its first five-minute-charge battery engineering samples. Working on extreme fast-charging (XFC) technology, the Israeli company is aiming to eliminate range and charging anxiety for electrically-chargeable vehicles (EVs.) Currently, rapid DC chargers offer some of the quickest charging speeds with a compatible vehicle. An example of this is Luicd Motor’s upcoming Lucid Air, which is reportedly capable of charging rates of up to 20 miles per minute when connected to a DC fast-charging network. Although, with a price tag of $80,000 (roughly €66,000) this luxury sedan’s battery technology cannot be considered widely accessible. If five-minute-charging technology could be introduced into the mass-market, this could remove several significant barriers to wider EV adoption; range anxiety, charging anxiety and wallet anxiety. Ultra-fast charging StoreDot is using this first production batch of sample cells to highlight the technology to potential industry partners. It will show OEMs how it replaced graphite in the cell’s anode with metalloid nano-particles, representing a breakthrough in safety, battery cycle life and swelling. In 2019, it demonstrated the full charge of a two-wheeled EV in just five minutes, as can be seen in the video below. Developed by Chinese company EVE Energy, StoreDot’s strategic partner, the sample cells do not require significant capital expenditure in bespoke manufacturing equipment. The XFC units are designed to be produced on existing lithium-ion production lines at EVE Energy. The samples are also compliant with UN 38.3, which ensures safety while shipping. Doron Myersdorf, CEO of StoreDot, said the company is getting one step closer to making its vision of five-minute-charging times a commercial reality. ′Our team of top scientists has overcome inherent challenges of XFC such as safety, cycle life and swelling by harnessing innovative materials and cell design. Today’s announcement marks an important milestone, moving XFC for the first time beyond innovation in the lab to a commercially-viable product that is scalable for mass production.’ With this, he looks to pave the way for the launch of a second-generation, silicon-dominant anode prototype for EVs later this year. Myersdorf explained; ′we founded StoreDot to achieve what many said could never be done – develop batteries capable of delivering a full charge in just five minutes. We have shown that this level of XFC charging is possible – first in 2019 with an electric scooter and again six months ago with a commercial drone. We are proud to make these samples available, but today’s milestone is just the beginning. We’re on the cusp of achieving a revolution in the EV-charging experience that will remove the critical barrier to mass adoption of EVs.’ A charge a week Technological developments like these work alongside the introduction of new EV models into the marketplace, demonstrating to consumers how committed OEMs are to electromobility. This appears to be working as a recent survey carried out by Tusker found that 63% of drivers are considering an EV for their next car. In November last year, the company-car supplier approached over 1,750 employed adults in the UK and found environmental benefits, home-charging and tax benefits all went a long way to swaying respondents. Of those drivers who said they would consider an EV, 36% believed they could name up to three or more local charging locations they could use. The survey also revealed that 79% of the respondents admitted to driving less than 150 miles a week. The company claims this ′means models like the Tesla Model 3 (263 miles – 423 kilometres), the Audi e-Tron (220 miles) and even the new Vauxhall Corsa-e (200 miles) will cater for a week of driver journeys on a single charge.’ Three-quarters of respondents believed EVs were within their budget, while the remaining quarter felt they were just for the wealthy. However, the company did point out that these vehicles are affordable on its salary-sacrifice scheme, ranging from £399 per month (€450) for a Tesla Model 3 to £249 per month for a Corse-e (inclusive of maintenance and insurance on a four-year agreement). As consumers consider the benefits of alternative-ownership methods, alongside the practicality of owning and charging an EV, there is little doubt that advancements like a five-minute-charging time would go far to convince more people that electromobility is a viable option.
Tech Electric Vehicles