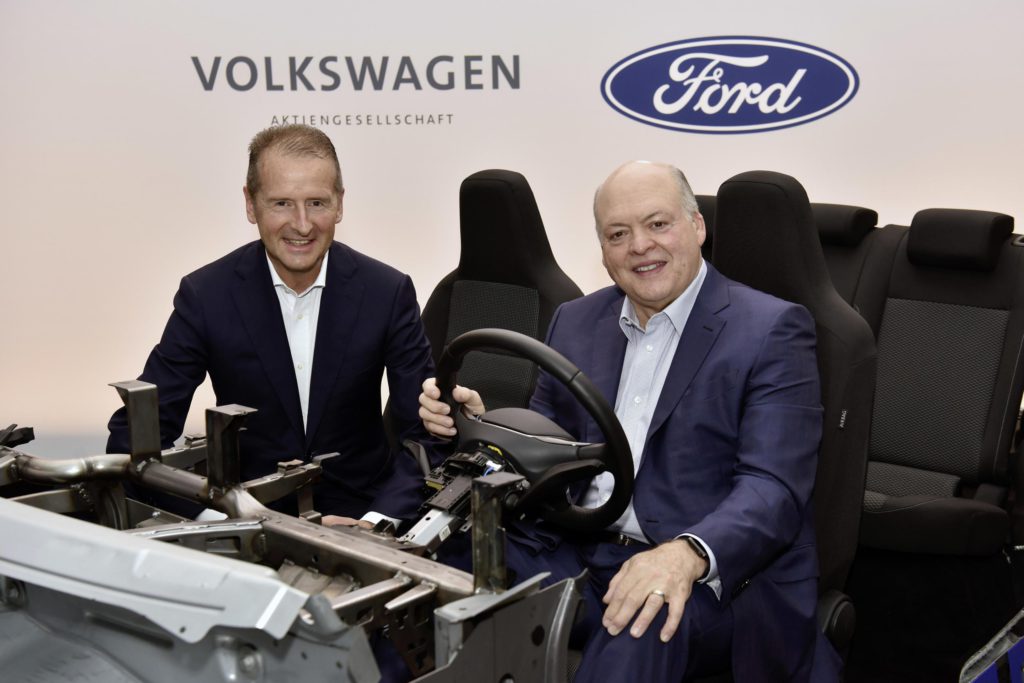 Ford and Volkswagen Group (VW) have today announced details on their joint development of both electric and autonomous vehicles.

The update on the carmakers’ global collaboration sees Ford gain access to VW’s MEB platform for electric vehicles (EVs), giving the US carmaker a boost in a market where it is currently lagging behind rivals.

Conversely, VW will invest $2.6 billion (€2.3 billion) for an equal share in Ford’s autonomous business Argo AI and will develop autonomous platforms and technology alongside the company to use in its own future vehicles. It is regarded that Ford is one of the automotive leaders in driverless systems, due partly to its ownership of Argo.

Therefore, the new collaboration, which has been rumoured for some months, will give both carmakers a step up in new markets where each is lacking.

VW’s MEB architecture is already fully developed and will underpin its ID.3 model when it is released next year. Additionally, future small Audi, Skoda and SEAT models will use the platform in their EV pushes. The German firm has also announced that it will make the MEB platform available to others, with startup company e.GO already taking advantage of this offer.

‘Ford will become the first additional automaker to use Volkswagen’s dedicated electric vehicle architecture and Modular Electric Toolkit – or MEB – to deliver a high-volume zero-emission vehicle in Europe starting in 2023. Ford expects to deliver more than 600,000 European vehicles using the MEB architecture over six years, with a second all-new Ford model for European customers under discussion,’ according to statements simultaneously released by Ford and VW.

Ford recently announced it would introduce at least three new nameplates in the next five years as it continues to grow its SUV portfolio, including the Mustang-inspired electric performance utility vehicle. The new nameplates are in addition to the all-new Kuga, Puma and Explorer Plug-In Hybrid that are coming by early 2020. Every new nameplate will also include an electrified option.

‘Looking ahead, even more customers and the environment will benefit from Volkswagen’s industry-leading EV architecture. Our global alliance is beginning to demonstrate even greater promise, and we are continuing to look at other areas on which we might collaborate,’ Volkswagen CEO Dr. Herbert Diess said in the joint statements.

‘Scaling our MEB drives down development costs for zero-emissions vehicles, allowing for a broader and faster global adoption of electric vehicles. This improves the positions of both companies through greater capital efficiency, further growth and improved competitiveness,’ Diess added.

‘The full transaction represents a valuation for Argo AI that totals more than $7 billion [€6.2 billion]’ according to the joint statements by Ford and VW.

The two companies will be equal partners in the business, which will be run as a joint venture, creating a global market leader in autonomous technology. Any future developments would have access to a huge range of vehicles, with all models in the VW Group and Ford’s leading car and commercial vehicle portfolio benefitting.

‘While Ford and Volkswagen remain independent and fiercely competitive in the marketplace, teaming up and working with Argo AI on this important technology allows us to deliver unmatched capability, scale and geographic reach,’ Ford President and CEO Jim Hackett said in the Ford and VW statements.

‘Unlocking the synergies across a range of areas allows us to showcase the power of our global alliance in this era of smart vehicles for a smart world,’ Hackett added.

‘Argo AI is fortunate to have a world-class team due to our clear mission and the commitment to deployment from our partners, and together with AID employees, we will have a global workforce to attract even more of the best talent,’ said Bryan Salesky, co-founder of Argo AI. ‘Plus, thanks to Ford and Volkswagen, Argo AI technology could one day reach nearly every market in North America and Europe, applied across multiple brands and to a multitude of vehicle architectures.’

With other manufacturers pushing autonomous technology, and domestic rivals Daimler and BMW joining forces to develop their own technology, the move keeps VW in touch with future mobility, while also allowing them to share the cost. This is also vital to Ford, which has reorganised its European business and announced several job cuts in the region.

The collaboration between the two companies has been expected since both announced a partnership on commercial vehicles earlier this year.