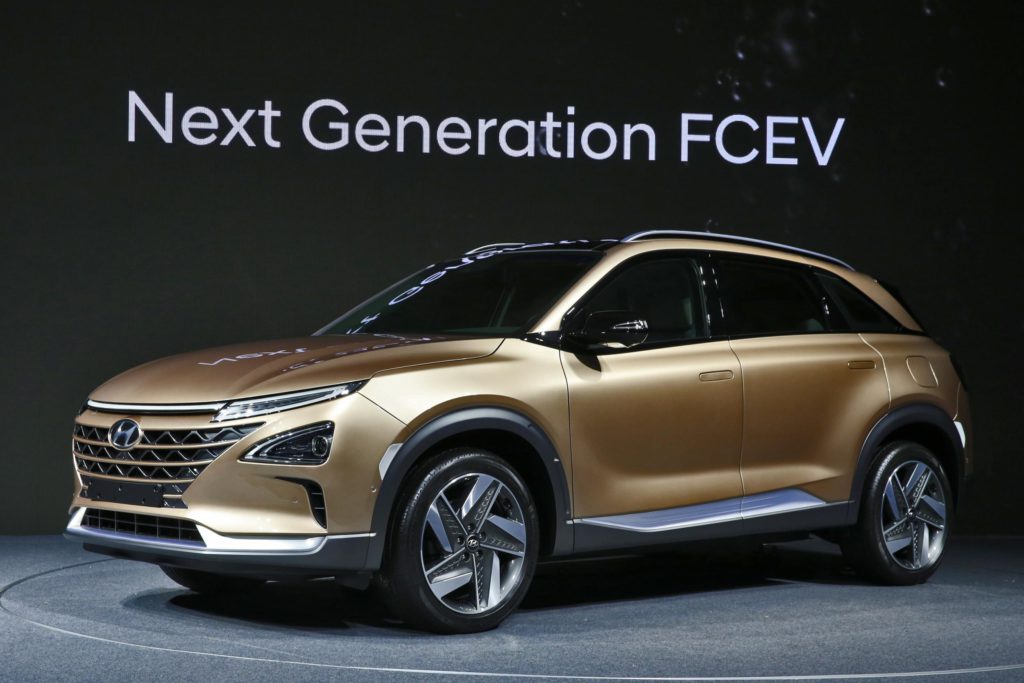 Hyundai has announced it is to place electric vehicles (EVs) at the centre of its product line-up going forward, which alongside sister brand Kia, will total eight battery-powered vehicles and two hydrogen cars by 2020. The Hyundai brand will also double its Europe SUV offering to four models by 2019, plus further bolstering of its crossover range, as it looks to ride the wave of these growing segments to meet its target of overtaking Nissan and Toyota to become the best-selling Asian brand in Europe by 2021.

The electric assault will be led by a premium long-range EV aimed at targeting upmarket leaders including Tesla and models launching from other rivals. This electric sedan will be launched under its high″”end Genesis brand in 2021 with a range of 500km (310 miles) per charge – matching models launching from Volkswagen Group around this time.

Hyundai and Kia, together fifth in global sales volumes, said they would add three plug-in electric vehicles to their plans, surging their total line-up to 31 models by 2020 – including eight-battery-powered and two hydrogen models. This is a dramatic shift in plans from only three years ago, when in 2014 they had planned 22 models, with only two being battery powered.

It is also planning its first dedicated EV platform, allowing the company to build multiple EV models with longer driving ranges. While it launched its first all-electric volume car the IONIQ last year, its driving range was uncompetitive with those from Tesla and General Motors (Ampera-e).

Like Japanese rival Toyota, Hyundai previously championed hydrogen over battery-electric vehicles, but improvements to the technology, the rise of Tesla and forced backing in China have caused both OEMs to rethink their plans, which still includes continuing with hydrogen development, whose time they ultimately believe will come. Widespread use is currently principally limited by a lack of sufficient refuelling infrastructure – which slow-moving oil giants are ultimately expected to address.

Despite the development of a mainstream market perhaps being a decade away, Hyundai reinforced its commitment to the technology on Thursday, unveiling a near-production version of its new as-yet unnamed mid-size hydrogen SUV, which has an enormous driving range of more than 580km per tank. This far exceeds the 415km range of its current Tucson hydrogen SUV, and is likely aimed at highlighting the strengths and differentiating the technology from all-electric vehicles. It is also likely aimed at positioning them as an ultimate destination for those holding out on EVs due to range or charging time anxiety – or those simply looking for a technology that operates in a way much closer to what they are used to.

The mid-size hydrogen SUV will launch in Korea early next year, with the US and Europe set to follow. A hydrogen bus is also planned to be unveiled later this year, with a hydrogen sedan also planned.

Volkswagen Group rival Audi has also reinforced its commitment to hydrogen, with development chief Peter Mertens saying: ′I stand especially positive on hydrogen fuel cells. We want to build on the competence [at its factory] in Neckarsulm and ultimately introduce models to the range.’ Without giving a timeline for Audi’s plans, he said that the technology offers a lot of advantages, but is currently held back by cost and especially infrastructure, adding: ′something still needs to happen’ before hydrogen can take off.

Meanwhile, in the immediate future, Hyundai is aiming to become the best-selling Asian brand in Europe by 2021 by tapping into growing segments through doubling its number of SUV models to four by 2019 and further growing its crossover range by 2021.

This SUV-driven product assault began this summer with the debut of the Kona subcompact SUV, launching in Europe later this year, aimed at competing against models such as the Renault Captur and Opel/Vauxhall Mokka, with Volkswagen also entering the segment with the T-Roc. The Kona will also be debuting an all-new platform that will be used for several sister subcompacts including sedans. Hyundai Europe COO Thomas Schmid recently called the Kona ′an important milestone of our journey to become the No.1 Asian automotive brand in Europe by 2021.’ This model will be followed in 2019 by a minicar-sized crossover – deemed to be a risky move by analysts, which is aimed at widening Hyundai’s SUV/crossover suite into a segment typically associated with very low margins.

The flagship of this SUV push will come following this, and will be a large crossover bigger than the midsize Santa Fe/Grand Santa Fe SUV, likely aimed principally at the US to compete against models such as the Volkswagen Atlas. In Europe it will be targeting seven-seat models including the Nissan X0-Trail and Renault Koleos.

Analysts widely see OEMs growing their SUV ranges as key to keeping and growing their market shares in Europe going forwards, with their market share now having risen above 25% – as well as their higher margins improving OEM profitability. Hyundai’s moves are therefore aimed at addressing the shortage of SUVs in its range – with Kia’s more established SUV/crossover range meaning the brand it currently growing at three times the rate of Hyundai.