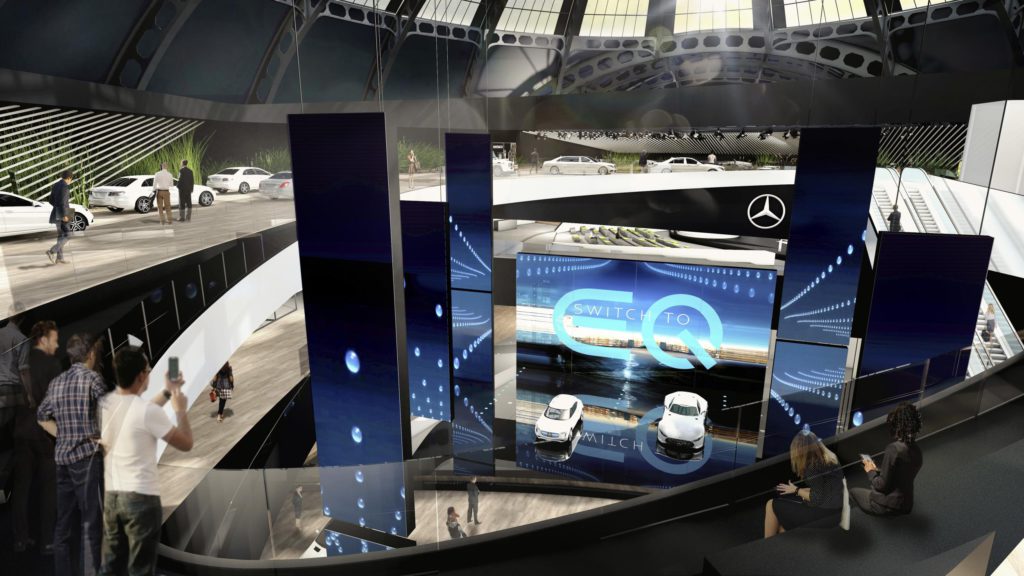 The IAA in Frankfurt is fast approaching, meaning that manufacturers from around the world are preparing their stands and announcing which models they will be displaying in the halls of Messe Frankfurt.

Since the last show in 2015, the world has moved forward with electric vehicle technology, while diesel has become less favoured by consumers, mainly due to the Dieselgate scandal, a story which broke during the previous event. Therefore, this year’s IAA promises to showcase a wide range of vehicle technologies which manufacturers plan to bring to market in the near future.

Daimler is bringing 100 Mercedes-Benz models to the event, and this includes giving the fully electric EQ concept vehicle a world premiere. The company is planning to use its EQ brand to offer further compact vehicles in what it considers an important sector of the auto market. As well as this, Daimler is planning to show its Mercedes-Benz GLC FCELL EQ Power, the manufacturer’s first hydrogen concept which combines long-range driving with zero emissions. This could be a particularly important step as countries begin to develop the necessary infrastructure for hydrogen cars to become a mainstay on their roads.

Also having their debut in Frankfurt are the comprehensively updated S Class Coupé and S Class Cabriolet in the standard and high-performance AMG versions. There will also be several world premieres of innovative concept cars, including the Mercedes-AMG Project ONE, a ‘hypercar’ study using Formula 1 technology.

The NX has enjoyed success since its launch three years ago. The company believes it is now poised to exceed customer expectations with updated exterior styling, interior enhancements and equipment features with improved convenience and functionality. Lexus introduced the compact hybrid hatchback to the luxury car market with the debut of the CT 200h at the 2010 Geneva Motor Show. With this latest update, the model has undergone evolutionary changes with sportier styling, an enhanced cabin and new equipment features. These have been designed to build on the model’s established strengths and add to its reputation for efficiency, reliability and driver-appeal.

These new concepts will sit alongside two new flagship models: the all-new LS limousine and LC luxury coupé. These halo vehicles aim to exemplify Lexus’s new global communications strategy and tagline, ′Experience Amazing’, and it says are central to one of the busiest years in the brand’s history.

In its first big outing since its acquisition by PSA Group, which itself is missing the event, Opel will be bringing the new Opel Grandland X. The SUV is another entry to a booming marketplace and updates the previous model in a first joint collaboration between Opel and its new owners. A second world premiere will see the new Insignia GSi launched, while the new Insignia Country Tourer is also making its debut at the show. Opel markets the Insignia GSi as a real sports machine for connoisseurs, while the Country Tourer is a practical station wagon with off-road looks. Both feature its intelligent all-wheel drive system with torque vectoring.

In addition, Opel will also debut the new large vans of the bestselling Vivaro range at the show, including the Vivaro Tourer. It targets them as being highly versatile and comfortable passenger variants.