Insight: The accelerating decline in the diesel share of new cars in the EU5 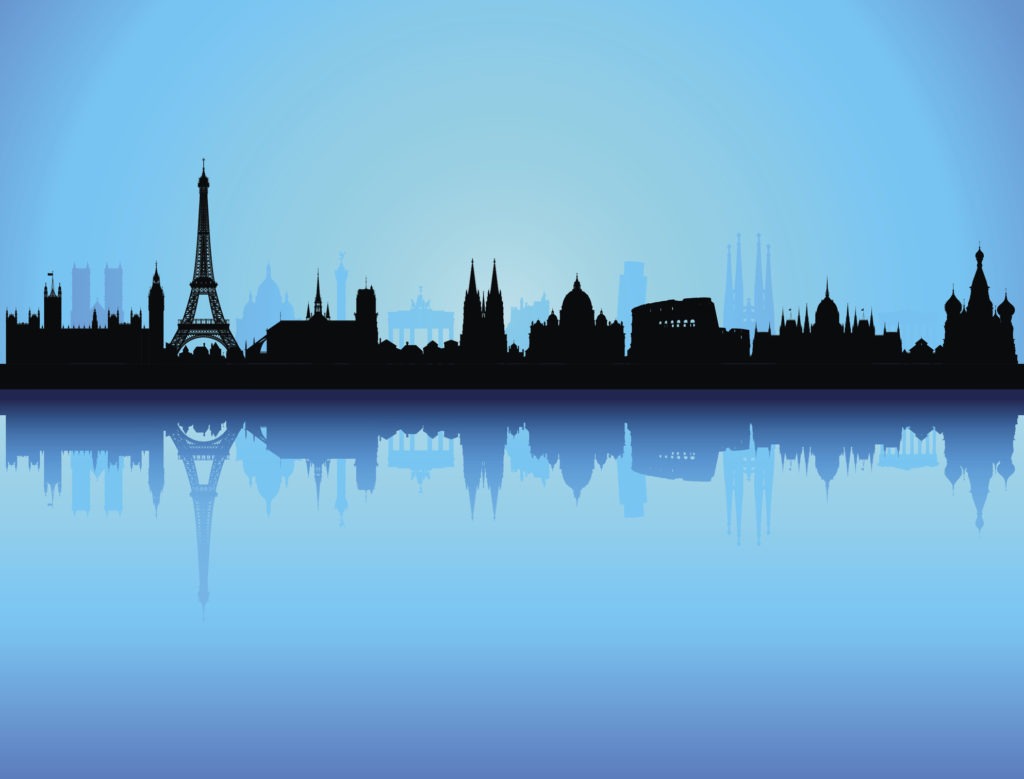 As reported back in September, the market share of petrol cars in Europe has overtaken that of diesel, according to figures from the European Automobile Manufacturers Association (ACEA). This marks the first time since 2009 that petrol has commanded a higher share of the new car market than diesel in the EU-15 countries; Austria, Belgium, Denmark, Finland, France, Germany, Greece, Ireland, Italy, Luxembourg, Netherlands, Portugal, Spain, Sweden and the United Kingdom.

Looking in detail at the performance of diesel cars in the Big 5 West European markets reveals that their share was already in decline in all markets except Italy by the time the Volkswagen Dieselgate scandal broke in September 2015. This demise has accelerated since, as the reputation of diesel has been increasingly tarnished and a raft of measures have been introduced to penalise diesel cars and/or incentivise low-emissions vehicles. It is also noteworthy, albeit not surprising, that the declines in the diesel share have been especially pronounced in the markets where regulatory measures have already been introduced and/or are expected.

Italy remains the notable exception as an absence of measures to deter the sale of diesel cars means the share of diesels continued to rise until 2016 and declined only subtly in 2017, falling from 57% in 2016 to 56.4% in 2016 according to the latest data released by the Italian carmakers’ association ANFIA.

In France, the diesel share fell below 50% in every month in 2017. This is the first time the diesel share in France has been below 50% since 2000 and, up until five years ago, diesel made up around 75% of sales in the country. Moreover, as petrol captured 47.6% of the new car market, it actually overtook diesel (47.3% share in 2017) to become the leading fuel type for new cars in France, which was an inconceivable phenomenon until recently.

In Germany, the diesel share of the new car market has dipped below 40% every month since August. The full-year share fell a staggering seven percentage points to 39% in 2017, down from 46% in 2016. This is the first time the diesel share has been lower than 40% since the year 2003, with the exception of 2009 when scrappage schemes boosted demand for small, largely petrol-driven cars.

Just under 57% of new vehicles sold in Spain in 2016 were diesels. This represented a significant decline from previous years – diesel represented over 70% of registrations at the start of the decade. Moreover, the diesel share of new car registrations has fallen below 50% every month since March (except in September) and captured just 48% in 2017, according to data from the Spanish carmakers association ANFAC. This decline of nine percentage points is the highest among the Big 5 markets, and it is also the first time the diesel share in Spain has fallen below 50% in a year since 1998.

Registrations of diesel cars plummeted 17% in the UK in 2017, while demand for petrol cars increased by 3% and alternative fuel vehicles (AFV) were up 35%. Diesel is, therefore, bearing the brunt of the market contraction and uncertainty over the future of the fuel is undoubtedly exacerbating the underlying weakness of the UK’s new car market. The diesel share of the new car market dropped to 42% in 2017 as a result, compared to 48% in 2017. It even dipped below 40% in August and in the final three months of 2017. 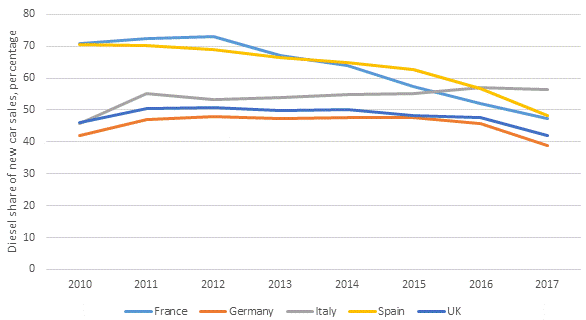 Manufacturers are concerned that the sudden decline in diesel sales will hit their CO2 targets, and this could lead to large fines for some of the leading car makers, as strict requirements for CO2 output from vehicles sold could be missed by the 2021 cut-off point. Until 2015, diesel was a reliable technology and had a strong presence in the automotive market, with companies relying on it to reduce their average CO2 emissions. However, since the emissions scandal broke, countries have been promoting a shift away from the fuel, as evidenced by these new figures.

ACEA Secretary General Erik Jonnaert has previously commented that: ′Policymakers need to be aware that a sudden shift from diesel technology to petrol will lead to an increase in CO2 emissions, given that the market penetration of alternative powertrains remains low.’

This increase in CO2 emissions has already been confirmed in the UK for example, and so the industry needs diesel cars as a bridging technology until hybrids and electrically chargeable vehicles gain momentum in the European market. However, demand for diesel cars is projected to fall even further although the magnitude naturally depends on the measures that will be introduced and, in turn, the response of consumers.

As reported back in October, a report by credit ratings agency Standard & Poor’s (S&P) suggests that the diesel engine share of the European automotive market will drop as low as 30% by 2030, as the technology is phased out by manufacturers and affected by negative press.

In the UK specifically, in a new report by the University of Aston, Professor David Bailey suggested that diesel will fall to just a 15% market share by 2025, down from 50% in 2014 and 42% in 2017. Aston University expects a further 10% drop in sales this year and says diesel will account for less than a third of the market by 2020.

Autovista Group expects the market share and residual values of diesel cars in the major European markets to continue on a downward trend, with values coming under greater pressure in the markets where the most measures have already been rolled out or at least publicly discussed.

The effect of product demand on the value of used diesel vehicles in the five largest West European markets – France, Germany, Italy, Spain and the UK – is discussed in further detail in the update to Autovista Group’s Diesel Intelligence report.