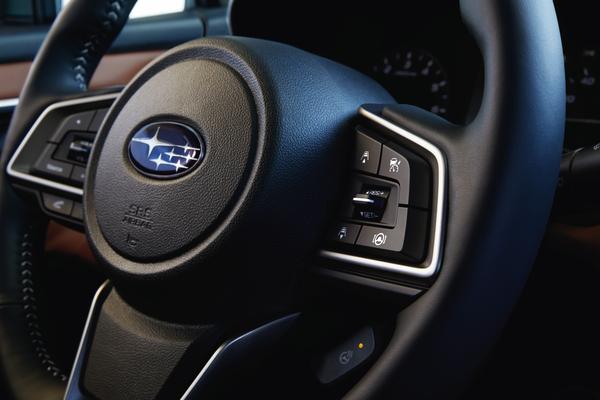 Autovista Group journalist Phil Curry sat down with Subaru executives in Geneva to find out more about the company’s future and its plans to reinvigorate the brand in the UK. In part one, he talks with Torbjörn Lillrud, automotive development director for Subaru in Europe.

Sitting with Torbjörn at the Geneva International Motor Show, I had the opportunity to find out more about the company’s plans for the future. Below us sat two e-Boxer hybrid models, the latest Levorg and a new concept, the Subaru Viziv.

The Japanese manufacturer has a strong market share in Scandinavia and is successful in other areas of Europe. It is now looking to build its market share in the UK, where the Subaru name is more associated with the World Rally Championship, Colin McRae and performance versions of the Impreza, an image the carmaker wants to shed as it moves on to the SUV and off-road markets.

′In the US we have a 3.5% market share, we are very successful in Australia, and again in Scandinavia, Spain, Switzerland and so forth,’ says Torbjörn. ′But in the UK, we are still seen as a performance brand thanks to our past success in motorsport, perhaps something we ourselves have been slow to move away from.

′The challenge therefore in the UK is to establish a new brand platform, similar to what we have done in the rest of the world. This means building a new dealer network, bringing up brand awareness, moving the image in the direction of outdoor living – meaning it has to be reliable, safe and takes you from A-B, no matter what the road and weather conditions. This is the aim.’

One reason for the acceleration of electric technology is the decline in the sale of diesel engines. Following the Dieselgate scandal, which broke in 2015, manufacturers have seen demand for the powertrain drop as governments and some media outlets demonise the fuel.

For Subaru, continued demonisation is no longer an issue. ′One and a half to two years ago, we decided to stop working with diesel cars,’ Torbjörn says. ′We know that other brands are doing the same, diesel is disappearing. It is already shrinking all over Europe, some markets more dramatically than others, and this is, of course, challenging for a distributor and a manufacturer. During my 30 years in the industry, I think this is the most complicated time ever.

′The good thing about being a niche brand is that we don’t get those dramatic effects [in sales] with such big changes. If you have a 10-15% market share, sell billions of cars and then make a dramatic change, it has a massive effect on production, supply chain and so forth. For a niche brand, we can adapt more easily. In Scandinavia, for example, even with electric growth and taxation that hugely benefits environmentally-friendly cars, we have our biggest market share.’

Subaru is a smaller company than many of those it sat alongside in the Geneva halls, although its stand was just as vibrant and impressive. With many using the event platform to showcase their new electric ranges, I asked Torbjörn how the company was planning to ease itself into the future of mobility.

′We have developed a new platform, the Subaru Global platform, which currently underpins the XV and Impreza. However, from this moment on we are building the new Forester on it, and later we will move the Outback to it as well.’

′The new platform is built for three power sources; naturally aspirated engines, hybrid and full electric. It is a very clear strategy; in Japan, they have developed the e-Boxer [hybrid powertrain], and the next step is the development of a fully electric powertrain.’

Torbjörn then expanded on the reason why a quick switch to electrification had come around. ′In the beginning, the EU Commission had a clear strategy that by the end of 2020 the amount of average CO2 emissions has to be 95g/km. This has been in place for some time, a long-term strategy that you had to follow,’ he said. ′The industry liked that – it was a long-term plan that you could invest in. What has happened very recently is that they have changed the rules and regulations, for example in the testing of fuel consumption and CO2 emissions with WLTP.’

′For all brands in Europe, there are problems in fulfilling the CO2 regulations. Such rulings are now coming too fast, and I think the effect will be that we are damaging the European automotive industry, as we do not have time to adapt.’

′As a consequence, everyone is rushing into the development of electric cars. For all manufacturers, the profit is in the engine. We have some of the most developed engineers, hundreds of thousands of them across Europe, tuning naturally aspirated or turbo engines. What will happen to their jobs tomorrow? There might not be a place for them. Who is best for electrical systems? China. They have the raw materials for battery production and the experts too.’

′So, we have the risk that a huge industry with a lot of jobs could turn because of the speed of new rules and regulations coming through, and we are opening the door to China to come and enter our market. Of 25 brands in China, already 20 are producing and selling electric and hybrid vehicles, so these brands could come into the EU and take advantage of the disarray.’