Ford has used the Mustang name to widen the appeal of the new Mach-E electric SUV. The model incorporates some Mustang design elements, such as the light signatures, and there is not a Ford badge anywhere on the car, just the Mustang logo.

The car is quite attractive by SUV standards, and the roofline is disguised using the body colour instead of black, giving it more of a coupé profile. There are many quirky touches, such as replacing the door handles with a digital button on the B-pillar that activates when the key is detected. The Mach-E has a spacious, modern interior with an upright 16-inch touchscreen and a 10-inch digital screen in front of the driver, which helps keep the eyes on the road.

Standard equipment is comprehensive and the large boot is supplemented with storage space in the front for the charging cable, for example. The model is nice to drive and handles well due to its convincing chassis, the ′one-pedal’ driving mode is well calibrated, and the engine braking is very efficient.

The claimed range is very good, especially for the extended-range rear-wheel-drive version, which manages 610km under the WLTP test cycle. The Mustang Mach-E is not a cheap car, priced similarly to the Tesla Model 3, but has interesting positioning.

It is larger and more powerful than offerings from volume manufacturers, such as the VW ID.4 and Skoda Enyaq, but at a higher price point, and is less expensive than similarly powered and sized premium models like the Jaguar I-Pace, Audi e-Tron and Mercedes-Benz EQC.

Click here or on the image below to read Autovista Group’s benchmarking of the Ford Mustang Mach-E in France, Germany, and the UK. The interactive launch report presents new prices, forecast residual values and SWOT (strengths, weaknesses, opportunities and threats) analysis. 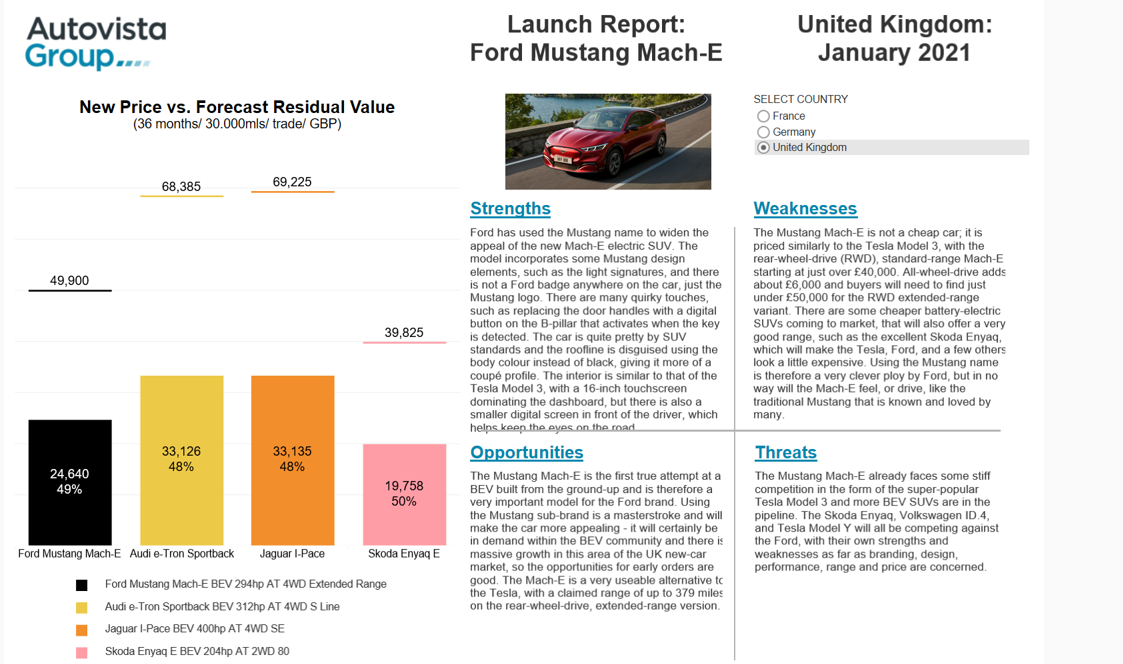