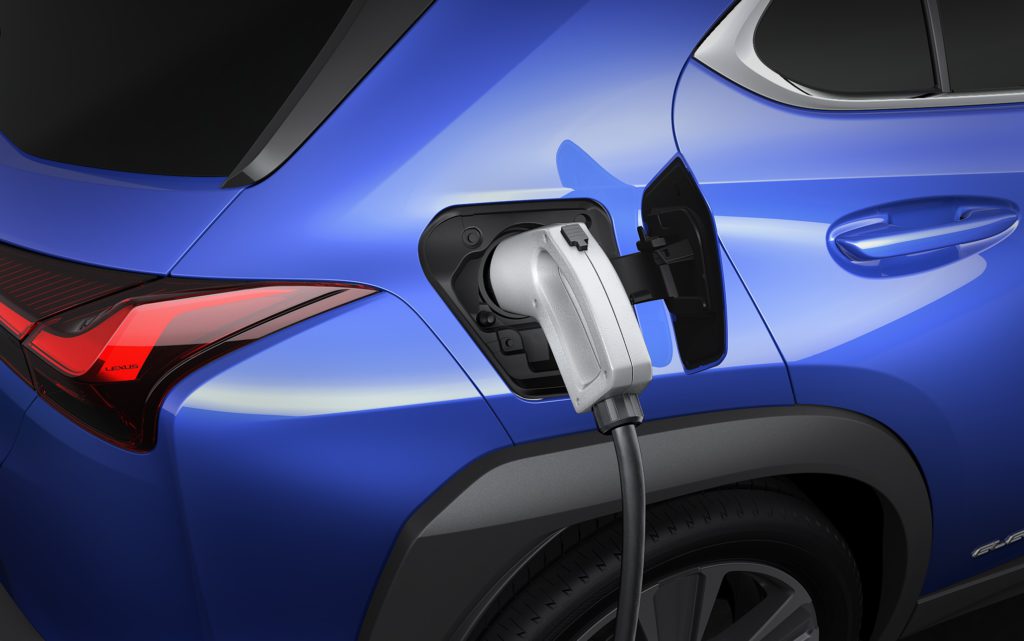 Lexus has introduced its first battery-electric vehicle (BEV), the UX 300e, at the Guangzhou International Automobile Exhibition, which runs from 22 November to 1 December. Hyundai and Kia have also presented new BEVs for the Chinese market; the Lafesta EV and the K3 EV.

The UX 300e is scheduled to go on sale in the Chinese and European markets in 2020, and in Japan early in 2021. It has an output of 150 kW and a battery capacity of 54.3 kWh, providing a â€²natural-yet-brisk acceleration character’ according to Lexus. The batteries are located directly underneath the floor of the cabin, delivering a low centre of gravity and a driving range of 400km. However, this is under the old NEDC test cycle and would be lower in both the new WLTP cycle and in real life.

The new model is the first fully-electric vehicle to be presented as part of the brand’s global electrification strategy, â€³Lexus Electrifiedâ€³, which was announced at the Tokyo Motor Show earlier in 2019. The technology enables integrated control of the powertrain, steering, suspension, and brakes, leveraging the motor-control technology cultivated in Lexus’s development of hybrid vehicles.

Lexus engineers have retained the design and utility characteristics of the UX hybrid crossover and have focused on the performance advantages of BEVs to enhance on-road performance. BEVs are naturally quiet on the road and so Lexus has added insulation to suppress outside noises that would be noticeable without an internal combustion engine (ICE) and transmission.

The UX 300e offers the latest in connected-car technology. By linking to a smartphone using the LexusLink app, drivers can check the battery capacity and driving range. Charging controls are also included, such as a timer function to inform the owner when the vehicle will be fully charged or to schedule charging, dependent on when the vehicle will next be driven or when energy prices are low. The app also allows the owner to remotely control the climate of the car.

Hyundai has also used the Guangzhou motor show as an opportunity to present its Lafesta EV for the Chinese market and subsidiary Kia has unveiled the K3 EV, which has similar performance data to the Lafesta.

Like the Lexus UX300e, the new electric Hyundai saloon has a power output of 150 kW but is equipped with a 56.5 kWh battery and has a range of up to 490 kilometres. Although it is not specified, this is also expected to be the range under the NEDC test cycle and, as with the Lexus, will be lower under WLTP testing and in real-world driving conditions.

Hyundai subsidiary Kia also revealed the K3 EV saloon in Guangzhou, which was specially developed for the Chinese market. Like the Lafesta, the K3 is already available with a petrol engine and as a plug-in hybrid, with the pure electric version now following. Kia also presented a new compact SUV in Guangzhou, the KX3, but an electric variant is not initially available.

As with the Lafesta EV, a 56.5 kWh battery is used in the K3 EV and in both cases the battery cells are sourced from the Chinese manufacturer CATL.

The supplier is making inroads in Europe too, with plans to build a factory to produce battery cells in the German state of Thuringia. The company plans to invest up to â‚¬1.8 billion in the new production plant near Arnstadt, which will supply lithium-ion cells for use in battery packs for BMW and other manufacturers.

BMW has said it plans to source â‚¬4 billion worth of battery cells from CATL over the next five years. The contract sees â‚¬1.5 billion worth of cells supplied from the new CATL plant in Germany and the rest will come from China.