This month's MMD reveals that the average residual values (RV) of cars aged 36 months and with 60,000km were higher in all the Big 5 European markets in February than a year earlier. However, values were lower than reported for Italy and the UK in January.

RV retention, represented as a percentage, declined month on month in Italy and the UK too, along with Germany. The largest decline in RV-percentage (RV%) terms was in the UK, where the average was 46%, equating to a 3.8% change compared to January. The country remains in lockdown, with restrictions on dealer activity in England extended to 12 April.

Similarly, German dealerships remain closed until 7 March. The month-on-month downturn in RV retention in February was only minimal, but Germany is the only major European market where the RV% was lower in February 2021 than in February 2020, albeit by only 0.4%. 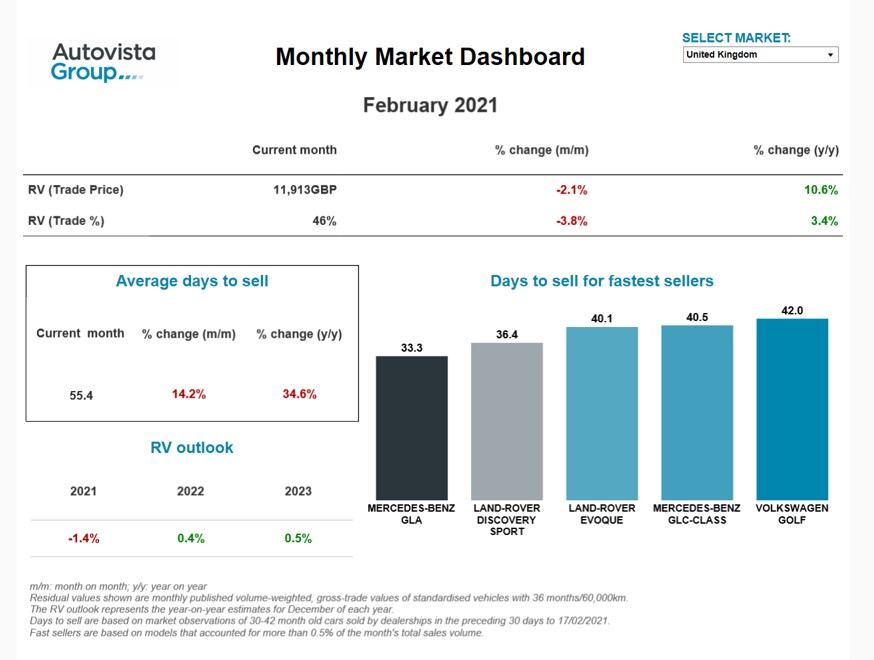 In addition to the pressure on RVs, three-year-old cars are selling more slowly than a month ago in Germany and the UK as the closure of dealerships (except for online ′click-and-collect' sales and servicing/repairs) hinder transactions. The average number of stock days rose by 9%, to 55 days, in Germany and by 14%, also to 55 days, in the UK over the last month.

Compared to February 2020, three-year-old cars are moving on more slowly in France, Spain and the UK. The latter is suffering the greatest slowdown in the average number of days for 36-month-old cars to sell, up 35%. In contrast, cars are still selling quicker than a year ago in Germany as stock days dramatically reduced from July 2020 until the end of the year, before rising since.

The fastest-selling cars in the major European markets in February 2021 are in Italy. The Volvo XC60, BMW X1 and Kia Sportage are all taking fewer than 30days to find a new home.

The new MMD also features the latest Autovista Group RV outlook. A downward trend is forecast in 2021, with prices of used cars in the 36 months/60,000km scenario declining in all the Big 5 European markets. In the February update, the RV outlook was improved slightly for Italy, but values are still forecast to decline by 3.1% in 2021. Used-car prices are forecast to decline by 0.4% in France, 0.7% in Germany, 1.1% in Spain and 1.4% in the UK in 2021.

In Germany, the outlook has improved slightly for 2022, with the RV decline limited to 0.2%, but Spain's growth outlook has been downgraded from stability to a contraction of 0.5%. For 2023, the RV outlook has been revised subtly downwards in both Germany and Spain. RVs are still forecast to rise in all markets except Germany however, albeit only minimally.

Click here or on the screenshot above to view the monthly market dashboard for February 2021.