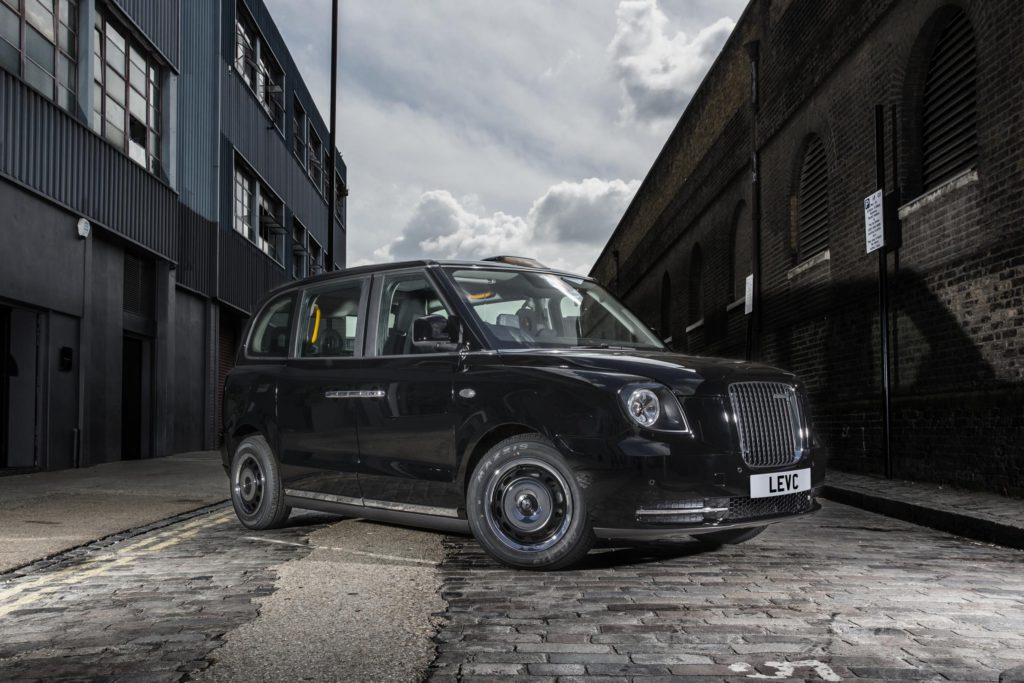 Due to new rules being introduced by Transport for London (TFL) relating to the city’s taxi network, the owner of the London Taxi Company (LTC), China’s Geely Holding Group, has unveiled its new ′black cab’ and has announced a rebranding as the London Electric Vehicle Company (LEVC).

The new branding will take effect from September 2017 and reflects the £325 million (€367 million) investment in electrification by Geely, which has seen a new production facility built in Coventry. The move was needed following a new ruling that means all London taxies must be capable of running on zero emissions by 1 January 2018. This has meant the end of diesel taxi production, with the first EV cabs expected to be on UK roads from November 2017.

The new TX black cab, which has been designed to resemble the classic London taxi, is a plug-in hybrid, with a 70 mile electric range and able to cover 400 miles on petrol. With the average taxi covering 120 miles per day and many used on long runs between stations and airports, the need to cover the limited mileage of an electric vehicle (EV) with petrol power is needed.

Designers of the new vehicle were keen to ensure the ′face’ of the new cab conveyed a message that the driver was reliable and serious yet friendly, and was neither too cute nor too aggressive or retro. The interior can fit six passengers, compared with five for the current model, and features a large sunroof, as well as a large touchscreen for driver navigation. The famous London cab turning circle has also be retained.

Speaking at the branding announcement, Chris Gubbey, CEO of LEVC, commented: ′From our heritage as the manufacturer of the iconic London Taxi, we have unparalleled insight into the needs of commercial operators. Drawing on the best of British design and engineering as well as technical expertise from our sister company Volvo, our products will help transform city living and provide taxi drivers with an average weekly fuel saving of £100 (€113) compared with our outgoing diesel model.’

While the company will no longer produce diesel vehicles, with the last rolling off the production line in May 2017, LEVC expects diesel-powered cabs to remain on London roads until at least 2032, due to an average 15-year lifespan.

TfL has also committed to installing charging points specifically for black cabs. By the start of 2018, when the new rules come into effect, there will be around 80 points, and this is expected to rise to 150 by the end of the year, and to 300 by 2020. However, with first deliveries of the new taxi expected in November 2017, and LEVC hoping for 150 on London roads by the end of the year, some drivers are questioning where they will be able to charge their vehicles in the meantime. TfL has announced it is looking to expand the city’s rapid charging network for all EV drivers.

The move to EV production also allows LEVC to look at the global market for supply of its vehicles. The company has already signed a deal to supply 225 cabs to Rotterdam Mobility Centre, allowing its fleet to meet new pollution rules in the Dutch capital. Both companies have said the first vehicles will be delivered in the first quarter of 2018.

International Trade Minister, Mark Garnier MP comments: ′Last year, more UK cars were exported than ever before and this new partnership between LEVC and RMC is yet another vote of confidence in the UK’s highly competitive automotive industry. The UK has world leading expertise in manufacturing and developing low carbon vehicles, and I’m delighted that Department for International Trade has helped LEVC secure its first overseas order in the Netherlands.’

The agreement highlights Geely’s intentions to promote LEVC as a multi-market vehicle company, rather than simply supplying taxis to London. LEVC currently has over an 80% market share for purpose-built taxis in London and the new TX has undergone extensive testing to ensure it can operate in any conditions. Geely has also toured European cities from Paris to Berlin, seeking to drum up interest for a potential export market.