Nissan wants its operations, and the life cycle of its products, to be carbon-neutral by 2050. A guiding star in this journey will be electromobility. The carmaker plans that ′by the early 2030s, every all-new Nissan vehicle offering in key markets will be electrified.’

′We are determined to help create a carbon-neutral society and accelerate the global effort against climate change,’ said Nissan CEO Makoto Uchida. ′Our offering in electrified vehicles will continue to expand around the world, and this will make a major contribution to Nissan becoming carbon neutral. We will continue to drive innovation that enriches people’s lives as we pursue a sustainable future for all.’ 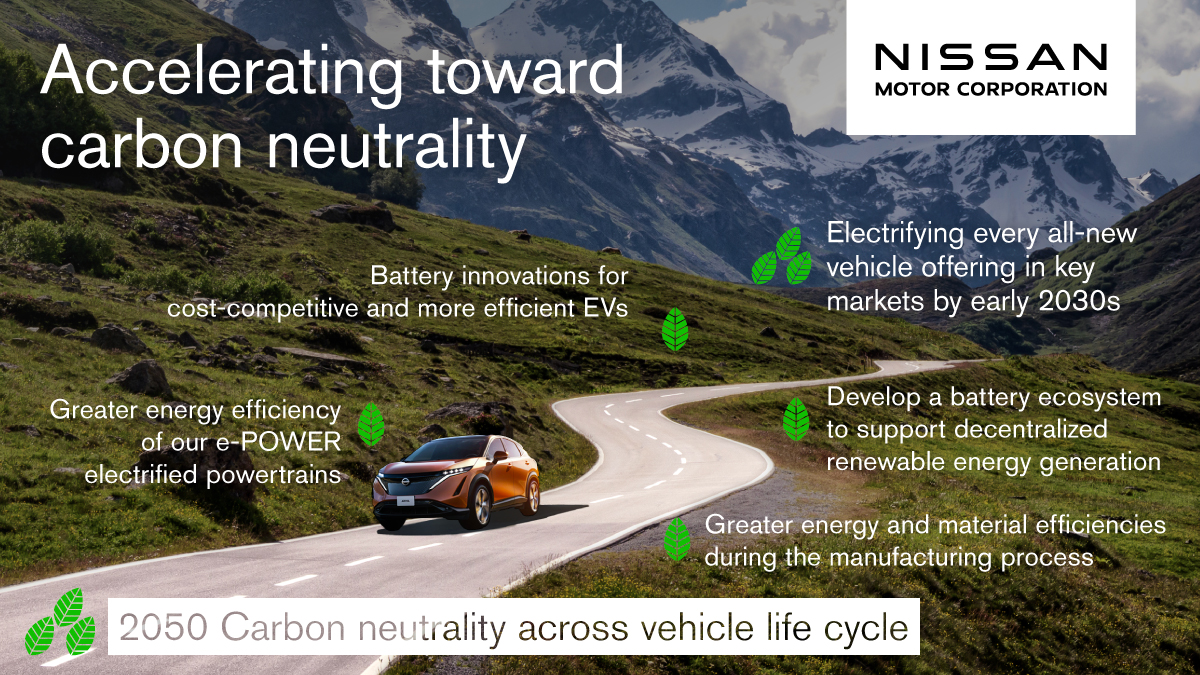 In order to reach its carbon-neutral goals, the carmaker will rely on a range of electric innovations. This includes the advancement of solid-state batteries and other related technologies to produce more cost-competitive and efficient electrically-chargeable vehicles (EVs).

′With 100% of all new vehicle offerings to be electrified in the key markets of Japan, China, the US and Europe by the early 2030s, Nissan will also be among the leaders in driving the adoption of electric-vehicle technology,’ the carmaker said.

Autovista Group’s Daily Brief approached Nissan for clarification on how this will impact the range of drivetrains on offer come 2030. A spokesperson confirmed that ‘all-new models’ refers to newly launched models and full model changes that Nissan will be offering, which will be fully electrified. ‘However, gasoline-powered models which have been launched before this time will continue to be sold, and the switch to electrification will be made based on the timing of full model changes,’ the spokesperson said.

The carmaker also has plans to advance its e-power drivetrain, which is its answer to a hybrid engine. Instead of using both an internal combustion engine (ICE) and an electric motor to drive the wheels, the petrol power is used to charge the battery instead.

Manufacturing looks to benefit from developing a battery ecosystem that will support decentralised, onsite power-generation for buildings with renewable energy sources. This will mean the carmaker will reach for greater collaboration with the energy sector, as it looks to support the decarbonisation of power grids.

Looking to recover from a COVID-19 dominated 2020, manufacturers are mapping out routes to a more climate-friendly destination. For example, Renault recently released its Renaulution roadmap, shifting its beliefs from volume to value, focusing on technology and clean energy. At the end of last year, Mercedes-Benz plotted electric-production plans with its ′Electric First‘ strategy, as BMW Group accelerated its electrification efforts.

But this transitional stage for the industry is less about keeping up with competitors, and more about meeting individually mandated goals. Volkswagen Group missed its EU CO2 fleet targets by only 0.5g/km last year, after pooling emissions and pushing hard for a green comeback. So, to get themselves over the regulatory line, manufacturers must not linger in their efforts to electrify models and achieve more efficient production processes.