Renault to introduce hydrogen in commercial vehicles by year-end 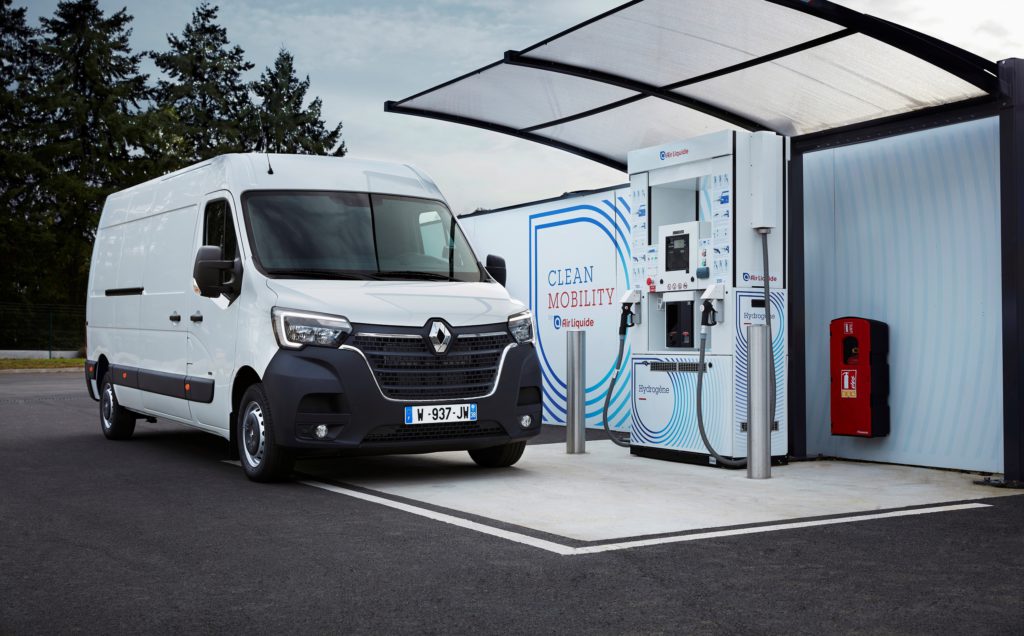 24 October 2019 Renault is to offer a hydrogen option in its light commercial vehicle range by the end of the year as the carmaker pushes forward with its development of the technology. Tested since 2014, Renault Group’s hydrogen technology was developed in partnership with Symbio, a Groupe Michelin subsidiary. The company will offer the Kangoo Z.E. Hydrogen at the end of 2019 and the Renault Master Z.E. Hydrogen in 2020. Many believe the technology will break through in the commercial vehicle market, where electric powertrains are not suited to the long distances and quick turnarounds required. Distance benefits Renault says the hydrogen fuel cell provides the additional energy for up to three times more range than 100% electric vehicles with a charging time of only five to 10 minutes. Hydrogen is arriving at Renault as a complementary solution to its electric and hybrid strategy. The vehicles are equipped with a range extender fuel cell that provides electric and thermal power of 10kW, increasing the range of the Renault Master Z.E. Hydrogen and the Renault Kangoo Z.E. Hydrogen to over 350km. â€²Hydrogen responds to the requirements of professionals not yet to be fulfilled by electric vehicles, notably for their long-distance travel needs,’ the carmaker said in a statement. From the end of 2019, the Renault Kangoo Z.E. Hydrogen will boast the best real-life range of any electrified van on the market at 370km (vs 230km for the Kangoo Z.E.). Specification rise Expected in first-half 2020, the Renault Master Z.E. Hydrogen will triple the range from 120 km to 350km and will be available as a van (two versions) and a chassis cab (two versions). Equipped with two hydrogen tanks located under the car body, the vehicle will gain in versatility with no compromises on the load volume and with a reasonable additional weight of 200kg. â€²Groupe Renault completes its range of electric light commercial vehicles with the launch of Renault Master Z.E. Hydrogen and Renault Kangoo Z.E. Hydrogen,’ said Denis Le Vot, Alliance SVP, Renault-Nissan LCV Business Unit. â€²These vehicles provide professionals with all the range they require for their long-distance journeys as well as record charging times. And the advantages do not stop there, as Renault Master Z.E. Hydrogen and Renault Kangoo Z.E. Hydrogen can run on decarbonised energy that respects the environment while offering all the comfort of electric driving.’ Crossing markets Hydrogen electric vehicles operate with a fuel cell, which combines hydrogen from a tank with oxygen from the air to produce electricity to power the motor. These vehicles meet the new environmental challenges of urban mobility. In addition, they offer increased autonomy, fast refuelling and easy maintenance. These advantages make hydrogen-electric light commercial vehicles particularly suitable for the intensive needs and uses of professionals in large urban areas up to the periphery of cities: transport and logistics, urban deliveries and multi-technical services, municipal and local authority services, express and special mail. The development of the technology could filter down into passenger cars, following in the footsteps of Toyota and Hyundai. However, for now, the French carmaker is concentrating on introducing a range of battery electric vehicles to the market.
Companies Vehicle Manufacturers