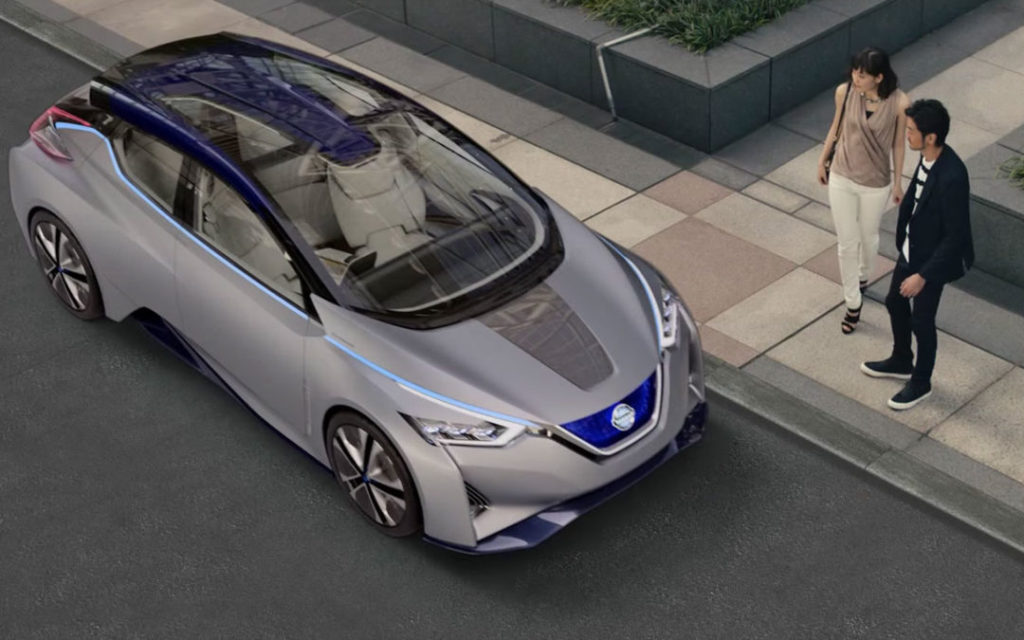 28 June 2017 Top-selling group the Renault-Nissan Alliance is playing the long game with its ridesharing and mobility service plans, saying that it does not intend to launch a commercial service until laws allow for driverless cars without a backup driver. Its mobility services will run with predetermined pick-up and drop-off points set at the beginning of the ride, using electric cars, likely to include the Nissan Leaf second-generation, Renault Zoe and future EVs based on its Vmotion concept cars. Partners have been brought in to build the Alliance’s mobility service, including Japanese game software maker DeNA Co. and French public transport operator Transdev SA, which suggests that the electric ride service will first launch in Renault’s France. Bringing in DeNA implies there will be a particular focus on making the user software platform engaging and fun to use, encouraging uptake. Head of Renault-Nissan’s connected and mobility division Ogi Redzic said testing by both Nissan and Renault had already begun. He said: â€²We think that the big opportunity for us is in automation, electric vehicles and ride-sharing and hailing together.’ However, the Alliance expects for its plans to develop behind closed doors for many years to come, with no commercial deployment on the horizon. A key reason for this is that it does not intend to launch a service before fully autonomous vehicles are allowed on public roads, considering this crucial for its new business unit to be cost-effective and reach its potential. Redzik sees the current conservative regulatory structures in most countries as holding mobility service progress back, since most governing current testing arrangements requiring a backup driver in the vehicle ready to take control in case the autonomous system encounters a situation it cannot handle. Redzik said: â€²It doesn’t just depend on us [having the technology ready]. To become fully driverless you need laws to change.’ As such, he says not to expect the Alliance to launch its mobility service before 2020, although it will â€²certainly’ come â€²within 10 years.’ The Alliance’s timeframe for its service suggests it does not expect fully Level 5 autonomous vehicles (for example, with no steering wheel or outside backup human control) to be allowed any time soon. This is a view shared by McKinsey analyst Thibaut Mueller and Autovista Group. Level 4 autonomy is certainly near to being a reality, but confidence that an autonomous vehicle can cope with all the rarest situations (ranging from emergency road signage to judging whether an icy road is safe to cross) is going to require years of full commercial deployment of autonomous vehicles before full trust is obtained. The risks are serious and concerns of authorities warranted. The closest feasible approach in the near future is probably that being undertaken by Delphi using Renault Zoe vehicles in France, also in collaboration with Transdev. The vehicles will be monitored at all times by officers in a remote control room, which can take control of the vehicle at any time when necessary. This allows costs to be reduced, as there will not need to be one backup driver per vehicle. Another carmaker that has been taking a similar R&D approach to mobility services waiting on commercial deployment for the time being, is Toyota. It has not had the new buzz of competitors continuously announcing new ridesharing service plans, such as Daimler’s Car2Go or BMW’s DriveNow, but Toyota executive vice president Didier Leroy, the carkmaker’s highest-ranked European executive, says â€²We are just following a plan that was started many years ago.’ In recent years, Toyota has been working with Silicon Valley giants Microsoft and Nvidia, using the latter’s Drive PX autonomous computing platform. Leroy said: â€²We strongly believe this is something we can’t do alone due to the speed of change and due to the agility of many new competitors.’ Like Renault-Nissan, Toyota is looking to the long game with its mobility services rollout. Goldman Sachs forecasts automated rides will be five times the size of the taxi market by 2030. Around this time, analysts believe the global auto market may start to decline, due to emerging disruptors such as excessive traffic congestion, as city populations continue to outstrip the sizes of their road networks, as well as due to vehicle city access regulations (such as those proposed for London), regulatory developments (including emissions) and new consumer behaviours and needs. Many may frequently use ridesharing services rather than buy a car. LeRoy said: â€²Market and sales growth are not secure in the long termâ€³Â¦ So we have to change the business model.’ Currently, 92% of Toyota’s growth is down to manufacturing and sales, with only 8% through services. Leroy expects that over the next 20 to 30 years, this growth with be a much more balanced 50-50. In addition, â€²green mobility’ will be central to all transport service plans, including zero-emission manufacturing. He sees the main themes of the future being â€²green’, â€²clean’, safe, connected and convenience. LeRoy said: â€²By 2050 we will not have any conventional engines in our line-up.’ In their place will be a new suite of green technologies, including battery-electric and hydrogen. Photograph courtesy of Nissan