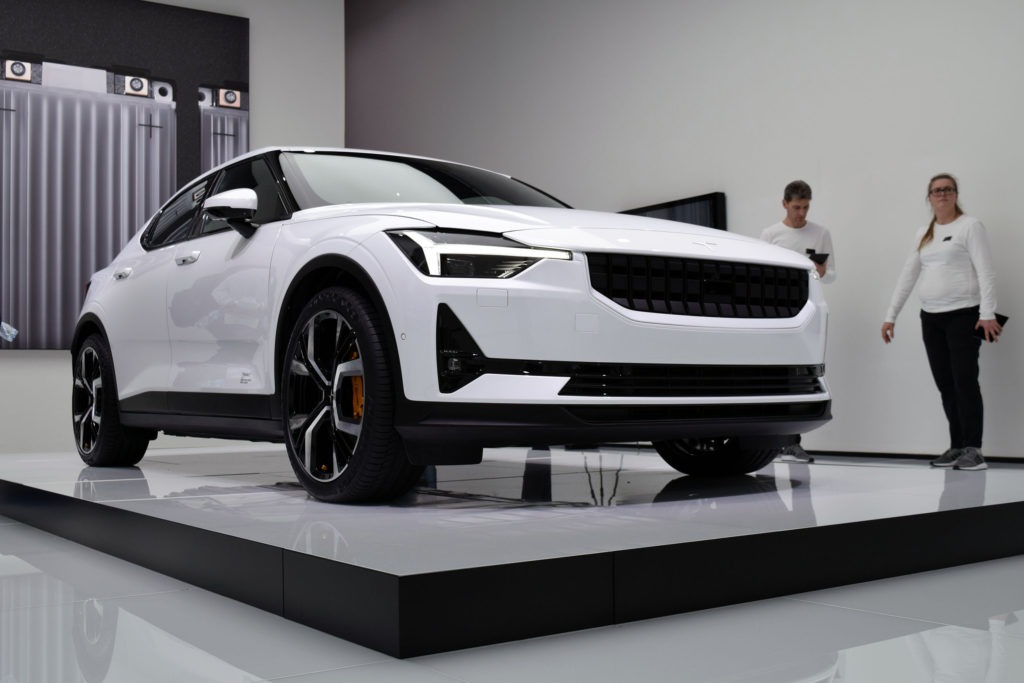 The Geneva International Motor Show (GIMS) takes place in a changing automotive world. The 89th running of the event sees manufacturers faced with mounting challenges as political and environmental concerns hamper carmakers and force them into developmental avenues they may not have considered before.

Gone are the days of lavish stands, car catwalks and stage shows, with celebrities announcing the latest models. Gone too are the extravagant concept vehicles. Instead, more accessible displays allow visitors to get closer to the action, while any concept on show has some production value and is more likely to make it to roads around the continent in the coming years.

GIMS 2019 is all about the future of mobility. The latest petrol and diesel vehicles that were launched could almost be lost in the sea of interest in electric (EV) and hybrid vehicles. These are the future of the automotive industry, allowing carmakers to meet strict emissions targets levied by the European Commission, while they lament the decline in diesel sales.

While many of these EVs have already been publicised and launched – and are simply at the show to remind people of their presence – others are making their debut. Audi’s e-tron, Daimler’s EQC and Porsche’s Taycan have already seen the glow of show hall lighting but whereas Honda’s e prototype was simply a concept before, the Japanese company is now displaying a ′90% production ready’ version that remains largely true to the previous iteration. Peugeot is displaying its new 208 line-up, with an EV variant included, and Polestar, spun-out of Volvo (who are not present as they prepare for their electrified-only future), brought the Polestar 2 for its first public outing – days after its online launch. 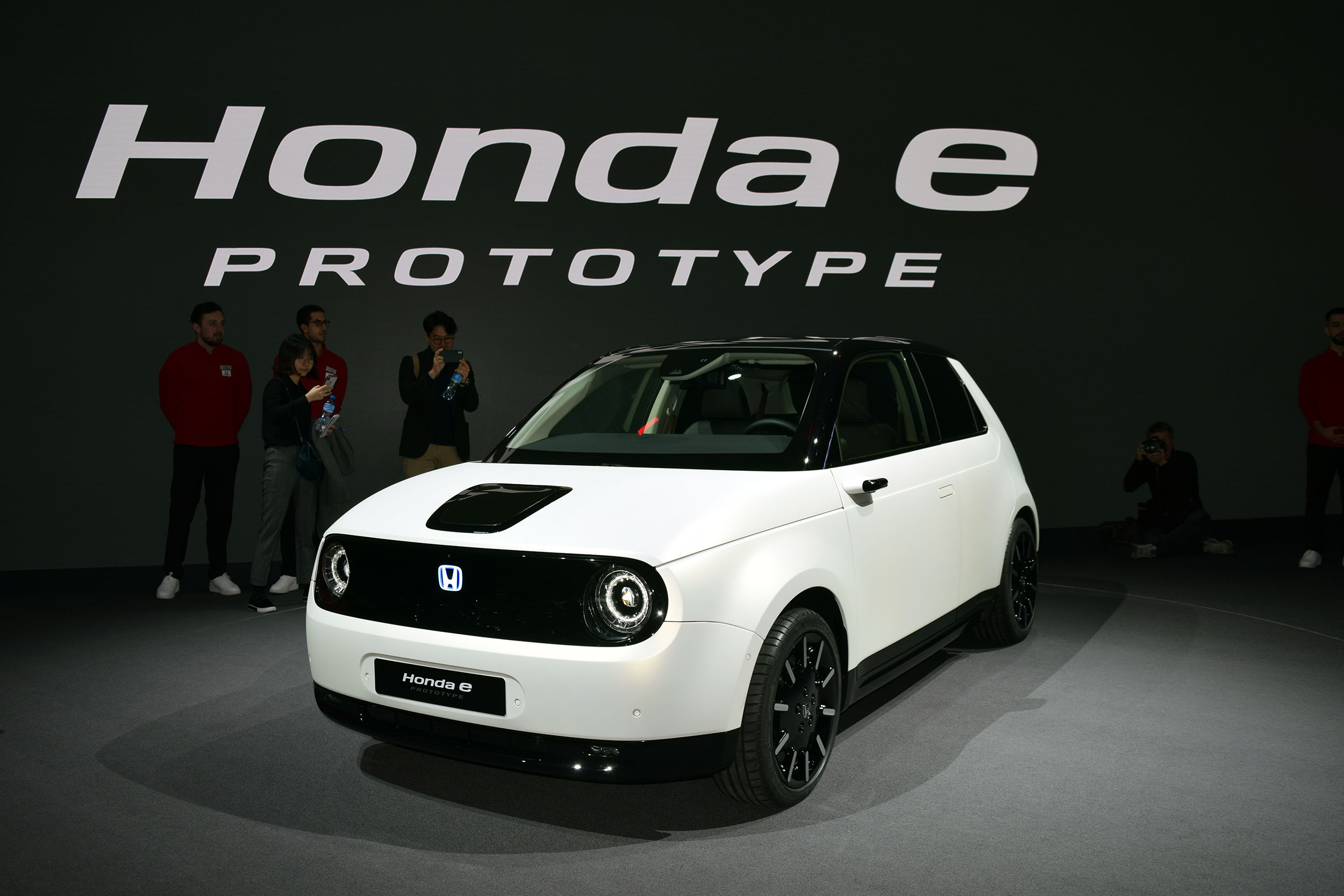 Honda premiered its EV concept at Frankfurt in 2017 and, following a positive reception, stated that it would try and keep the ′retro’ design (based on the original Civic) through to production. The e-prototype displayed at Geneva is ′90% production ready’ and the Japanese company has kept its word, simply ensuring that the car will meet safety standards while remaining practical.

No major details were available for the vehicle, except that it will deliver a range of 200km and will charge to 80% capacity in 30 minutes. While the driving distance might be shorter than more developed models, Honda was at pains to point out that this is a city car and to increase the range would have required a bigger platform.

The e-prototype features a bonnet-mounted charging point and rear-view cameras instead of wing mirrors. This improves aerodynamic efficiency as too do the flush pop-out door handles. Inside, a next-generation dual-screen horizontal display and connected infotainment system can be found in what is a minimalist design. 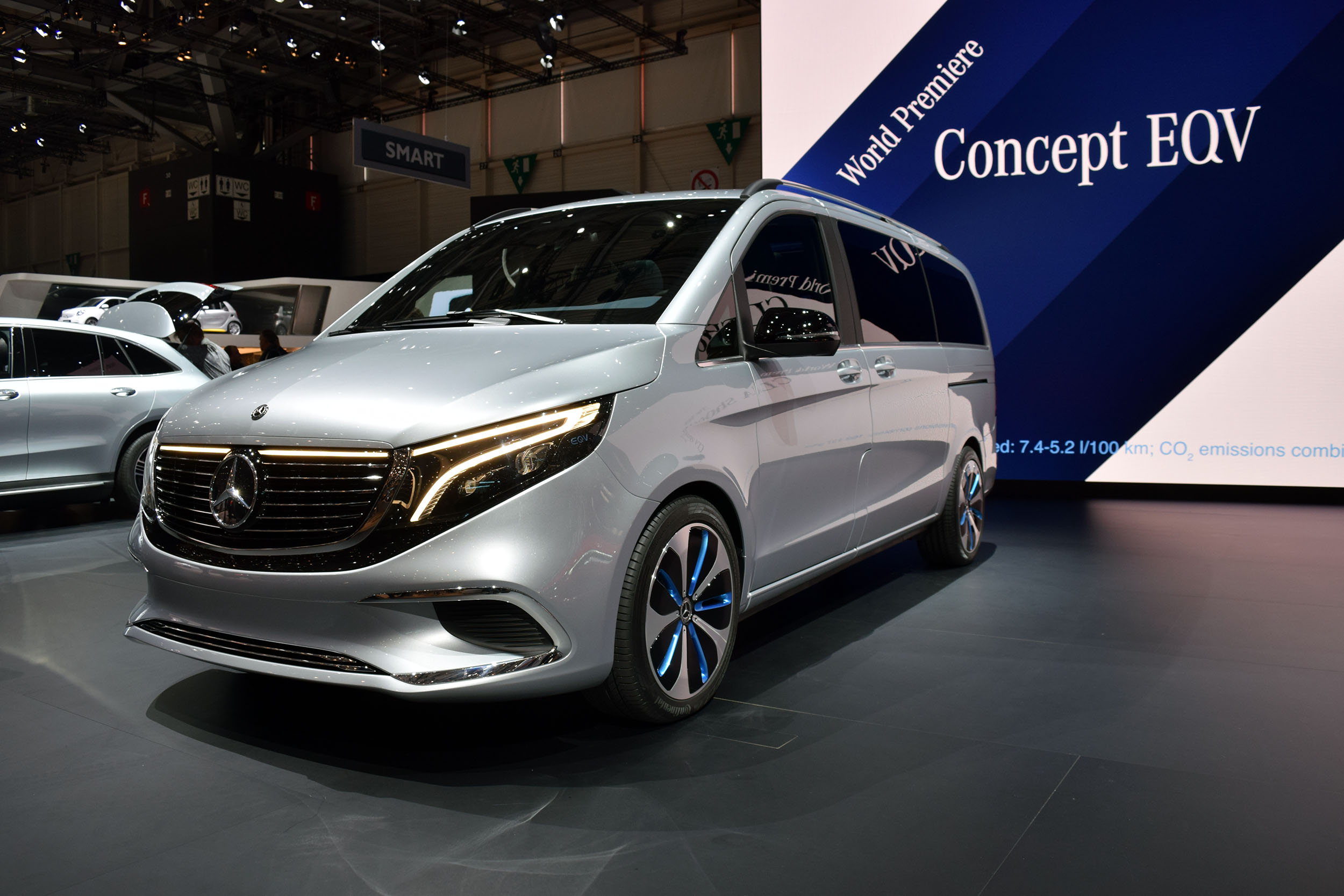 The new version of the CLA, with its sloping estate roof, is described by the company as an ′intelligent sports car with load space’ and is equipped with the latest safety features and digital technology to immerse the driver in the Mercedes-Benz User Experience.

The EQV looked rather understated considering its importance, the company billing it as the first electric vehicle people mover in the premium segment. Displayed was a close-to-production concept with a range of 400km and the ability to charge to 100km of range in just 15 minutes. Inside, the luxury interior can be converted from six to eight seats, covering a range of uses for private and fleet buyers. Daimler said a production-ready version would be displayed at the IAA Frankfurt in September.

Polestar rocked up to Geneva with the Polestar 2, which the company had launched online just days beforehand. The car features two electric motors, one on each axle, producing a total of 300kw with 660Nm torque. According to WLTP figures, the car will feature a 500km range, and achieve 0-100kmh in 4.7 seconds. The five-door fastback will be available from €39,000, placing it in competition with the Tesla Model 3.

Alfa Romeo launched a surprise on the unsuspecting press in Switzerland. The Italian manufacturer pulled the covers back on its first step into the world of electrification with the Tonale, an SUV concept that makes use of a plug-in hybrid (PHEV) powertrain. Taking centre stage around various iterations of Giulia and Stelvio models and last year’s Sauber F1 car painted in 2019 livery (the team now competes as Alfa Romeo Racing), the Tonale attracted significant attention throughout the day. 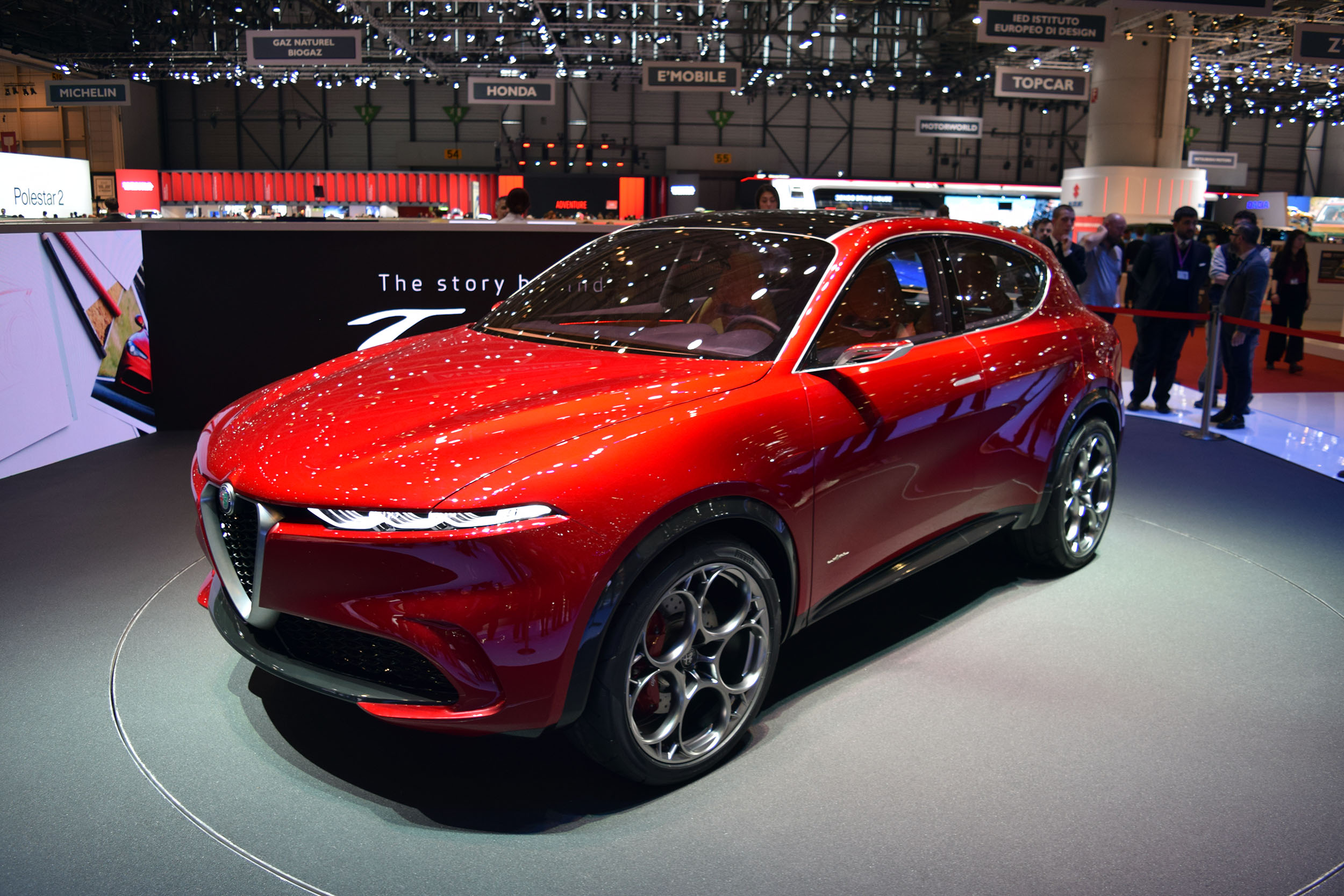 No details were given on performance or even the type and power of the hybrid motor, but, in typical Italian form, much was said about the design of the car. The rear lights are reminiscent of a signature, the roof leading off into a ′floating’ wing and the front end feeling like it wraps around the distinctive Alfa grille. Inside sees a 12.3-inch full digital cluster and a 10.25-inch touchscreen central head unit melting into the coldness of exposed aluminium and the warmth of Alcantara. The car is a concept but Alfa expect it to closely resemble the finished product, which will be the company’s first venture into the mid-size utility vehicle market.

Peugeot’s stand was again dominated by its giant fibreglass lion, prowling across a vast swathe of its floor space and standing elegantly beside its new hybrid and electric models. As in Paris, much interest was taken by the e-Legend concept, with its retro looks and pillarless doors swinging open into a minimalist cabin that takes the company’s i-Cockpit premise to a whole new level. 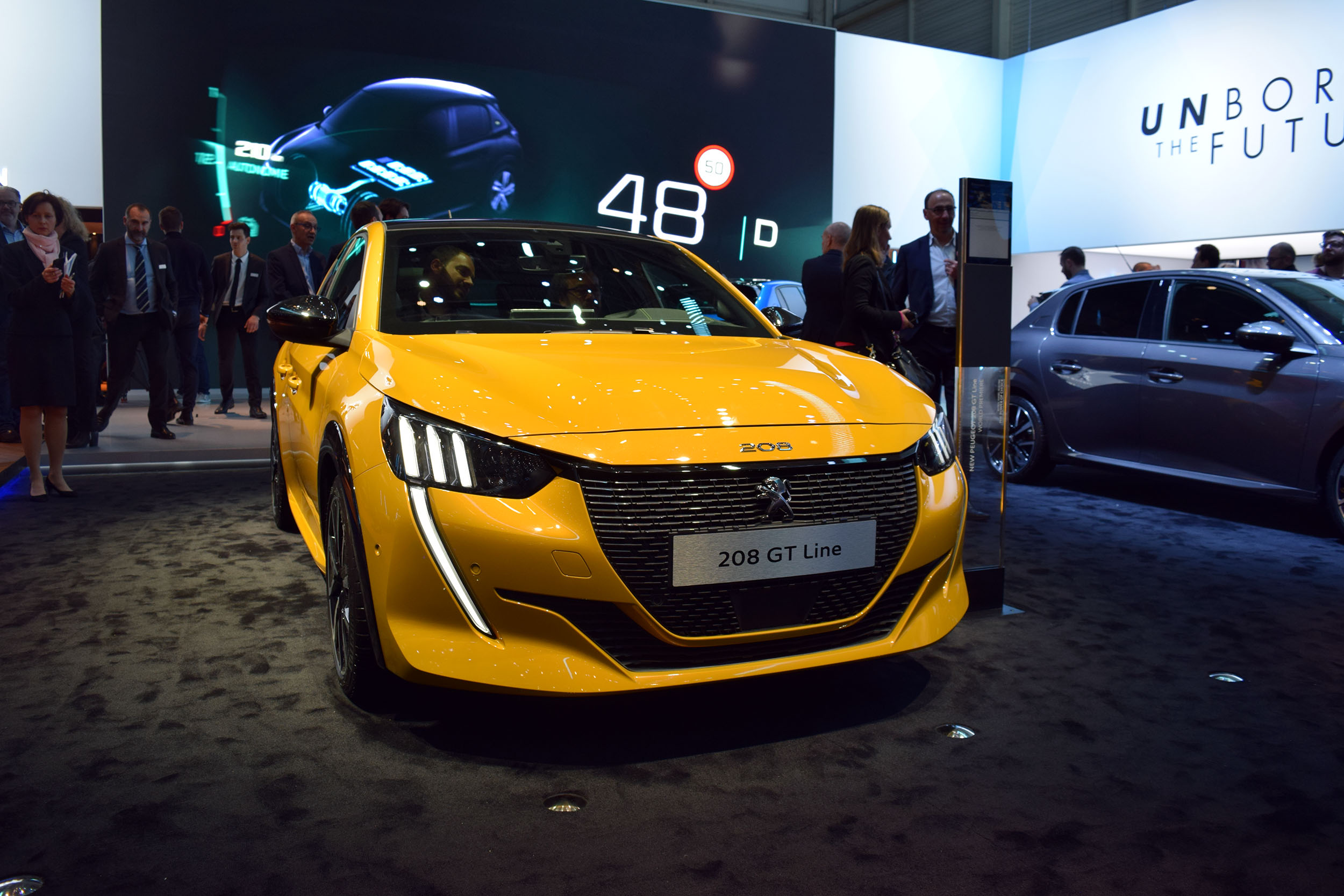 Alongside this standout centrepiece was the hybrid 508 Sport Engineered Concept. An evolution of the 508 Hybrid, Peugeot’s sporting division has sculpted the bodywork for a more aerodynamic pose, with its sharp front-end and side skirts working together to channel air flow effectively around the bodywork. This helps efficiency, allowing the 400bhp engine and 11.8kWh battery to power the car from 0-62mph in 4.3 seconds and achieve a top speed of 155mph.

Beside this was the new 208, which will now feature a plug-in hybrid and full electric version when it goes on sale. The e-208, as the EV will be known, features a 50kWh battery positioned under the floor, allowing for a more spacious interior, and offers a range of 211 miles on full charge. It offers three driving modes – Eco, Normal and Sport – to cater for all potential customers. Peugeot will also offer petrol and diesel variants of the new 208.

Volkswagen highlighted the versatility of its MEB electric vehicle platform with another ′retro’ concept, the ID. Buggy. This is a purpose-built version of the classic beach buggy, which was originally based on the Volkswagen Beetle. The lithium-ion rechargeable battery supplies a 150kW electric motor on the rear axle, while another motor is installed on the front to give the Buggy all-wheel drive.

Skoda was also making use of the MEB platform with a range of electric vehicles. The most striking, maybe because of its visual style, was the Vision iV concept. Th iV features a large grille intersected by a lighting strip that runs to beneath the slit-like headlights, entry to the cabin is aided by the lack of B-pillar, and the bright yellow paintwork gleamed beneath the hall lights. The flat-pack lithium-ion battery installed in the vehicle’s underbody saves space and provides a range of up to 500 kilometres according to the WLTP cycle. Wing mirrors are replaced by cameras to aid aerodynamic efficiency, while moving further into the world of digitalisation, smartphones can be used as a digital key to open the vehicle.

There were also impressive concept vehicles from other manufacturers including Fiat, Renault, Subaru and BMW. The Geneva show takes place until 17 March and is a fascinating snapshot of how the industry is being reactive rather than proactive, arguably for the first time in many years.