No-deal Brexit tariffs would increase the price of EU-built vehicles, effectively cancelling out the UK’s electric incentives and undermining a green coronavirus (COVID-19) recovery, the Society of Motor Manufacturers and Traders (SMMT) has warned.

Blanket tariffs under World Trade Organisation (WTO) rules would add billions to the cost of trade, and crucially, the cost of electric vehicles (EVs). These calculations highlight the threat of a no-deal departure, as the lobbying group urges both sides to re-engage in the negotiation process, honouring the commitment to ′get a good deal done.’

The 10% no-deal WTO tariff looks to add at least £4.5 billion (€5 billion) to the annual cost of fully assembled cars traded between the EU and UK. This equates to an average price hike of around £1,900 per EU-built vehicle. But new sums reveal that for fully-electric cars sporting more expensive technology, this cost creeps up to £2,800, effectively making the UK’s £3,000 grant null and void. The tariffs would also add some £2,000 on to the average cost of UK-built battery-electric vehicles (BEVs) exported to the EU. 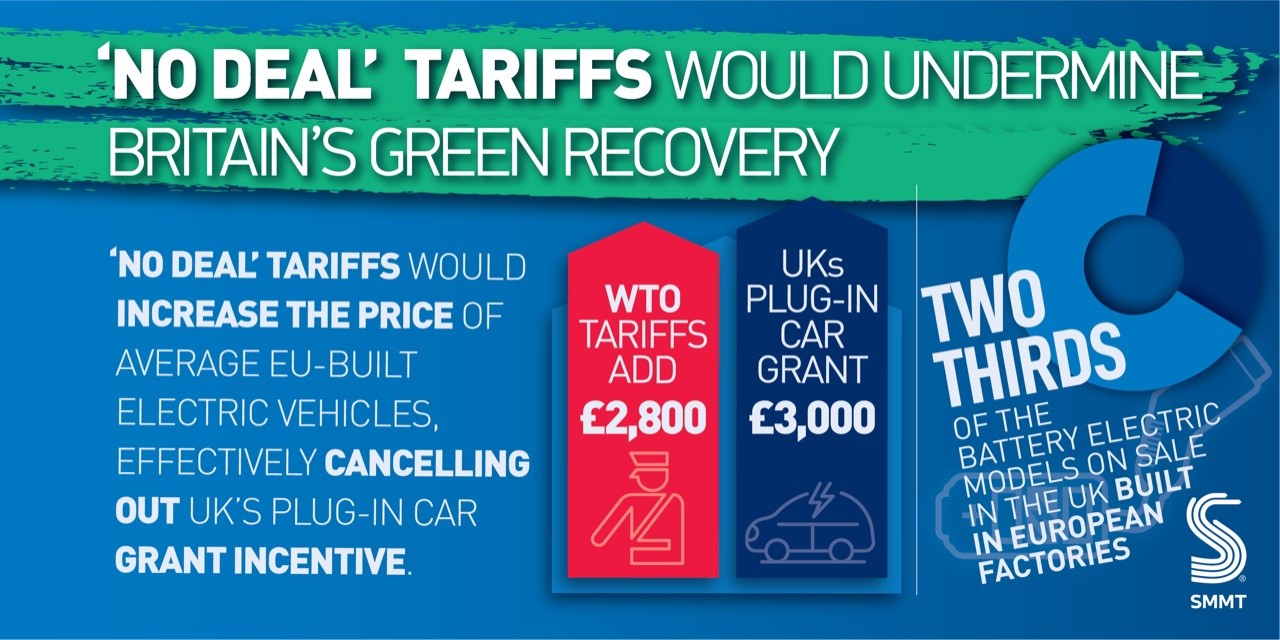 The UK and EU’s automotive industries are deeply entwined. For example, roughly two-thirds of all BEVs on sale in the UK are built in European factories. UK consumers are currently on track to register some 78,000 BEVs this year, with further growth expected in 2021.

However, the SMMT estimates that the tariff price shock could reduce demand for BEVs next year by at least 20%. This is even before the impact of potential border delays, supply-chain disruption and currency fluctuations are taken into account.

The automotive industry can breathe a momentary sigh of relief as trade talks now look to be back on, following a period of turbulence and apparent deadlock. ′It is clear that significant gaps remain between our positions in the most difficult areas, but we are ready, with the EU, to see if it is possible to bridge them in intensive talks,’ 10 Downing Street said in a statement. Officials from both sides will now hold daily talks in the run-up to the deadline in December.

Manufacturers have been quick to point out that should a no-deal occur, they would have to consider their options. PSA Group, which manufactures the Opel/Vauxhall Astra in the country, is waiting on confirmation before confirming which plant will build the latest model, while Toyota and Nissan are reported to be seeking compensation from the UK government should the scenario occur.

However, alongside the confusion over trading relationships, there has also been uncertainty over regulation alignment. In January, the sitting Chancellor of the Exchequer, Sajid Javid suggested that the UK would not align with EU regulations, causing an outcry from the automotive industry. Any move to create new rules that differ from the EU will cause headaches for some.

Recent news, however, seems to suggest the government is moving away from this stance, having adopted EU regulations over CO2 emissions into its independent law. Carmakers will still need to achieve an average of 95g/km across fleets but will have to take into account the smaller mass of vehicles sold in the UK market, which will detach from EU numbers.

′Just as the automotive industry is accelerating the introduction of the latest electrified vehicles, it faces the double whammy of a coronavirus second wave and the possibility of leaving the EU without a deal,’ Mike Hawes, SMMT chief executive. ′As these figures show, ′no-deal’ tariffs will put the brakes on the UK’s green recovery, hampering progress towards net zero and threatening the future of the UK industry.

′To secure a truly sustainable future, we need our government to underpin industry’s investment in electric-vehicle technology by pursuing an ambitious trade deal that is free from tariffs, recognises the importance of batteries in future vehicle production and ensures consumers have choice in accessing the latest zero-emission models. We urge all parties to re-engage in talks and reach an agreement without delay,’ he added.

As the UK government prepares to announce its transition to a zero-emission new-car market, the need for effective fiscal measures has been made even clearer. The country lags behind many of Europe’s markets when it comes to incentives. For example, German consumers enjoy a purchase incentive of up to £8,160 per BEV, meanwhile, UK BEV customers get just £3,000.

To reach targeted environmental goals, the SMMT is calling for ′a long-term commitment to competitive incentives, including full value-added tax (VAT) exemption for all zero-emission capable cars.’ The lobbying group calculates that this could potentially drive some 1.4 million BEV sales over the next five years, with an estimated 16% market share by 2025 compared with around 5% today.

Autovista Group is keen to hear your views on Brexit and the effect it will have on both the UK and Europe. Click here to take our in-depth Brexit survey and make sure you have your say.