TCO Dashboard: B-segment BEVs only competitive because of incentives

In the second of a new series that considers total cost of ownership (TCO), Autovista Group has created a dashboard comparing the retail prices (including taxes) and TCO of leading B-segment battery-electric vehicles (BEVs) in France, Germany, Spain and the UK. Senior data journalist Neil King explores the findings.

Autovista Group’s TCO analysis reveals that B-segment BEVs are only competitive compared to petrol models because of government incentives. However, hybrids still offer a lower TCO in all markets, except Germany, and list prices of small BEVs therefore need to be lower for them to gain momentum – especially if incentives are lowered (as has been announced in France) or even withdrawn entirely.

Under normal circumstances, the price positioning of B-segment BEVs (Opel/Vauxhall e-Corsa, Peugeot e-208 and Renault Zoe), at around €32,000 (£30,000 in the UK), means they struggle to be competitive from a cost perspective.

Government subsidies in France, Germany, Spain and, to a lesser extent, the UK, help to close the pricing gap. Nevertheless, the BEVs are at least 24% more expensive than our reference hybrid model, the Toyota Yaris, and 7% costlier than the 1.2-litre Peugeot 208 in France. In Germany, the price premium over the Yaris for the cheapest B-segment BEV, the Opel e-Corsa, is reduced to just 5% and the model is 11% cheaper than the petrol Peugeot 208.

B-segment BEVs can therefore only compete on price against petrol and hybrid rivals if attractive list price positioning is combined with healthy government support.

′OEMs need to leverage the government incentives but make an effort to bring list prices down over the next 12-18 months,’ commented Christof Engelskirchen, chief economist at Autovista Group.

Moreover, small BEVs only have a competitive TCO compared to the Yaris in Germany, even without factoring in potential discounts for the hybrid Toyota. 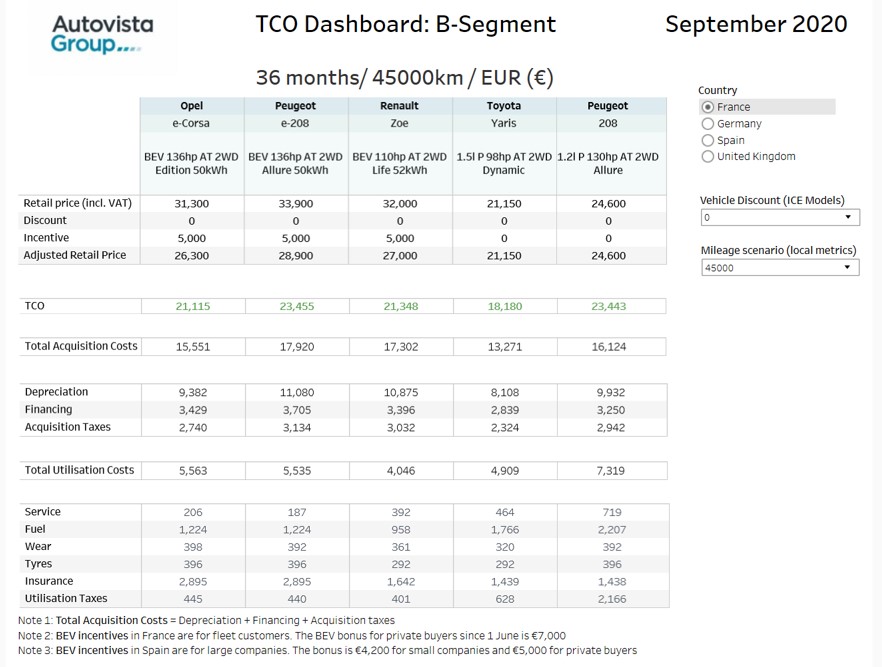 Given the incentives offered in the other major European markets, it was clear from our TCO analysis of C-segment models, conducted in June, that Spain also required incentives to make BEVs competitive.

The MOVES II incentive scheme for new BEVs and PHEVs, and the RENOVE scrappage scheme, were introduced in early July and boosted new-car registrations in the month.

Under the MOVES II scheme, large companies purchasing new BEVs and PHEVs costing less than €45,000 are entitled to a total subsidy of €3,800 (€2,800 from the government and €1,000 from the manufacturer). For small companies, the subsidy is €4,200 and for private buyers it is €5,000. Customers can also receive an additional bonus of €500 if they trade in a car to be scrapped that is over seven years of age.

Cars with other fuel types are not eligible for the MOVES II new-car incentive but can still benefit from the RENOVE scrappage scheme. When scrapping a car over ten years of age, buyers of hybrids, mild-hybrids and CNG or LPG cars costing less than €35,000 receive a bonus up to €2,000 – half provided by the government and half by the manufacturer. For cars with internal combustion engines (ICE) costing less than €35,000 and with CO2 emissions lower than 120g per kilometre, the maximum bonus is €1,600.

Both the MOVES II and RENOVE schemes have been applied retroactively to 1 January 2020, and so both new and young used cars are eligible for the subsidies in order to avoid potential stock problems.

The upshot is that existing and enhanced incentives across Europe provide a short-term boost as the automotive industry contends with the fallout from the coronavirus (COVID-19) pandemic. However, they may be lowered or, ultimately, fully withdrawn.

As a case in point, the French government has announced a reduction in the €7,000 incentives for private buyers of BEVs and PHEVs to €6,000 in 2021 and €5,000 in 2022. There has not been an announcement concerning changes to the incentives for fleet buyers. Nevertheless, Yoann Taitz, operations director at Autovista Group in France commented ′we could think that it should be €2,000 lower for fleet buyers too but this is just my assumption.’

A reduction in the list prices of BEVs is therefore still the only long-term solution to make electromobility viable from a TCO perspective.