Autovista Group’s COVID-19 tracker, which tracks 12 European markets, shows that the index of RVs, compared to early February, is back above pre-crisis levels in all countries except Portugal and Finland. The measurements began in February, with an index value of 100.

The UK has enjoyed the strongest rally in used-car prices, driven by the release of pent-up demand, both from the lockdown and the uncertainty running up to the country’s departure from the European Union on 31 January. The UK also faced a starker vehicle-supply challenge than any other market, which translated into higher RVs as used-car demand outstripped supply. Values rose from mid-May and peaked at 106.0 (a 6.0% rise) in the week to 11 October.

However, RVs have since fallen from this great height as pent-up demand is increasingly satisfied and supply improves. In the latest week for which data are available, to 8 November, the index has receded to 105.0 (a 5.0% rise) and a further downturn is expected as the year-end approaches, which also marks the end of the Brexit transition period. ′With the new lockdown, it is likely that RVs will continue to fall from their high 2020 position back to where we forecast,’ added Anthony Machin, head of content and product at Glass’s.

France benefitted from pent-up demand and a new incentive scheme that came into effect on 1 June. The €8 billion package includes a €7,000 grant for private buyers of new battery-electric vehicles (BEVs) costing less than €45,000 (€5,000 for fleet buyers), while buyers of new plug-in hybrids (PHEVs) can claim a €2,000 subsidy.

Additionally, France doubled its premiums for those looking to trade in older vehicles for a cleaner model, with a €3,000 grant for vehicles with internal combustion engines (ICE) and €5,000 for BEVs and PHEVs. Crucially, the enhanced trade-in bonus also applied to used cars and hence the notable rise in RVs. However, the scheme reached its 200,000-vehicle cap before the end of July and the Ministry of Ecological Transition announced the replacement of the recovery scheme with a conversion bonus, applicable from 3 August. This has translated into stagnation in the development of RVs in France since the end of August, with the index barely rising from 102 to 102.8 in the week to 8 November, falling to third place behind Poland in the process.

Autovista Group anticipates a slowdown in the RV development in France and our latest RV outlook expects prices of used cars to be 0.3% lower in France at the end of 2020 than when the COVID-19 crisis erupted in Europe, in March. ′A lack of supply has created the RV jump, but OEM plants are now working at, or close to, 100% capacity in France. So, this should no longer be the case and hence this circumstantial jump should decrease by the end of the year. Considering the 2021 malus [tax penalty], people could advance purchases but we have not changed the outlook right now,’ commented Yoann Taitz, Autovista Group head of valuations and insights, France and Benelux. 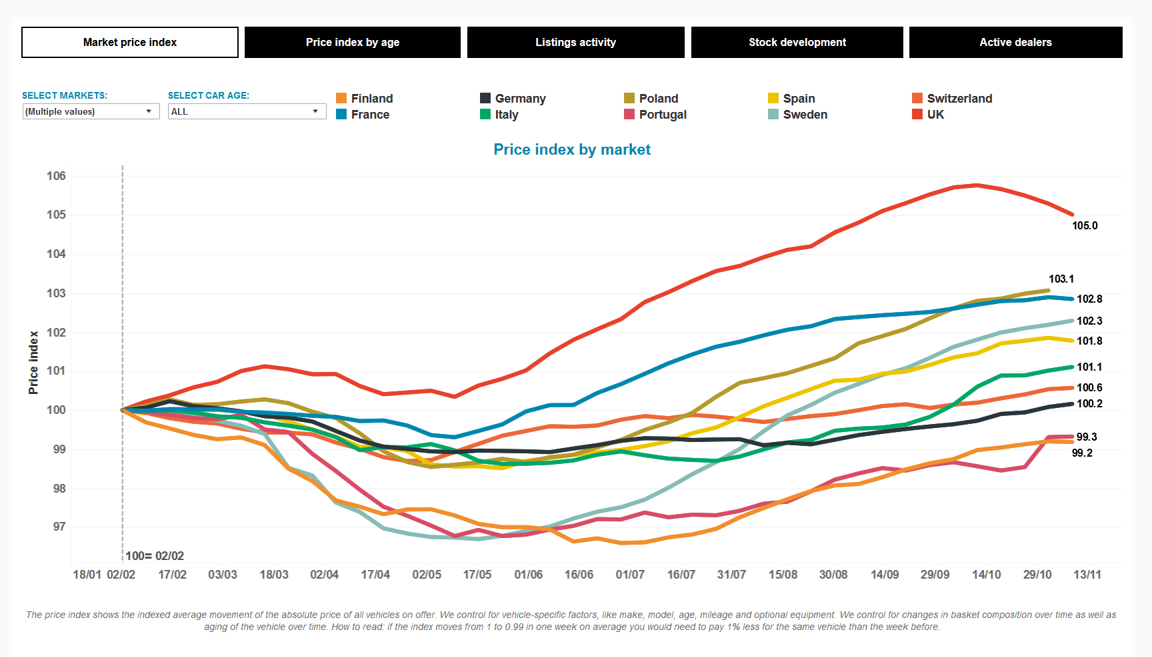 Sweden, Finland and Portugal all had rapid negative reactions to COVID-19. Dramatic lockdown measures were not introduced in Sweden and Finland, but RVs fell from early February to mid-May in both markets.

RVs have climbed in Sweden since mid-May and recorded 102.3 on the index in the week to 8 November, i.e. 2.3% higher than in early February. In Finland, the index of RVs fell from early February to only 97 in mid-June but have recovered slowly and remain at the lowest level in Europe, registering 99.2 on the index in the week to 8 November (0.8% lower than in early February). ′Finland is still running on low numbers, and we don’t see the same quick recovery as in Sweden. The import of young used Swedish cars has picked up again too, in combination with lower used-car values than normal, already before the crisis started,’ explained Johan Trus, Autovista Group head of data and valuations, Nordics.

Portugal also endured falling RVs since the tracker index started in February, but a more pronounced downturn commenced at the end of March. As in Finland, the price index has only increased modestly since, to 99.3 in the week to 8 November (0.7% lower than in early February). Portugal and Finland are the only European markets where RVs have not recovered to pre-coronavirus levels.

′Used-car values have been increasing since the end of May 2020 and almost reached pre-pandemic values at the end of October. There has been similar behaviour across all ages, with the exception of vehicles up to six months old that reached and exceeded pre-pandemic values as early as June. Used-car transactions have decreased less than new-car registrations during 2020, but there are no new incentive schemes because of the pandemic and also no new incentives from the government for 2021,’ commented Joao Areal, editorial manager of Autovista Group in Portugal.

The rest of Europe’s tracked markets remain ′late starters’ with broad stability in values as several effects are balancing each other out.

On the downside, most European markets essentially remain ′on hold’ as consumers wait for a better understanding of the full impact of the COVID-19 crisis, especially with a second wave of cases and new lockdowns across the region.

In Italy, for example, RVs recovered from late July to mid-October, partly because of the incentives to support the country’s automotive industry, which came into effect on 1 August. However, values have stabilised since.

Conversely, the disruption to new-car supply and demand continues to positively impact RVs.

In Germany, for example, used-car transactions were just 3.5% lower in the first 10 months of the year than in the same period in 2019, according to the KBA. They have even performed better than last year, for five consecutive months. New-car registrations have been far more affected, however, and are still 23.4% lower in the year-to-date than in 2019.

Meanwhile, the strongest development of RVs in recent weeks has been in Poland, where the index has overtaken France. ′We can still observe huge demand for used vehicles, especially the youngest, as demand for new vehicles is limited due to fast-growing list prices and availability,’ commented Marcin Kardas, head of the Autovista Group editorial team in Poland.

Despite the broad stability in the development of RVs, a mixed picture of used-car demand is emerging, Moreover, as Europe battles a second wave of COVID-19, new lockdowns, growing stock volumes, incentives for new cars, and rising unemployment, Autovista Group expects a slightly negative trend for the end of the year, especially for younger cars.

′The stable or slightly rising price levels in Germany are from my perspective a result of new entrants selling relatively quickly whereas models that are not moving on remain at badly-managed, comparably high prices. Just to clarify, there is no dealership ″rising″ prices, but they are being more optimistic when listing new arrivals and are ″forgetting″ about the older ones,’ commented Andreas GeilenbrÜgge, head of valuations and insights at Schwacke.

′It looks like as if there is a growing volume share of vehicles that are collecting stock days and are not being properly handled by the dealership. The overall volume on offer is rising and stock days are at a significantly higher average level than pre-crisis, at comparable asking prices and a worse list-price relationship. This is becoming a more and more unattractive proposition for dealers and may cause a problem at the end of the year,’ GeilenbrÜgge added.

This cautionary sentiment was echoed by Ana Azofra, valuations and insights manager at Autovista Group in Spain. ′Although prices remain higher than before the crisis, the trend is shifting. The cumulative drop in used-car transactions in 2020 is 14% and now, on average, prices are tending to stabilise.’

′However, the trend is completely different depending on the age group. Even for the youngest cars, prices are starting to drop and the stock volume, which was lower than in March only a few weeks ago, is now higher. This is mainly due to car-rental companies defleeting and as they are not renewing their fleets either, this could affect the volume of the youngest cars in 2021. Furthermore, the incentive scheme is already penalising RVs, as expected,’ Azofra explained.

′In contrast, prices of very old cars are keeping the positive evolution, both in terms of sales and prices, which is supporting the positive market average to a great extent. Firstly, the crisis is diverting demand towards cheaper cars, which favours used examples – especially older used cars. Secondly, the search for safer and more hygienic mobility has attracted some former users of public transport. In fact, the sales of these age groups especially increased in the regions where the coronavirus had (and has) a higher incidence,’ Azofra added.

The situation is a bit more optimistic than before in Spain, but the country faces the same challenges as elsewhere. Similarly, in Austria, ′new lockdown measures have come into effect as of November, and there is uncertainty regarding purchasing power and the general economic outlook. Therefore, our RV outlook for the end of 2020 is somewhat better than before, but we expect a shift of negative effects into 2021,’ said Madas.

In Switzerland, the number of active used-car adverts has been rising slightly since the second week of October and was higher than the number of deleted used-car adverts. ′If this trend goes on, the increasing number of used cars – together with rising dealer and/or manufacturer incentives on new cars – could stop the uplift trend for RVs in the near future,’ Madas concluded.

Click here to join our online seminar broadcast, 16 November 15.30 CET, as we present our latest update on how residual values will develop in a post-pandemic world.