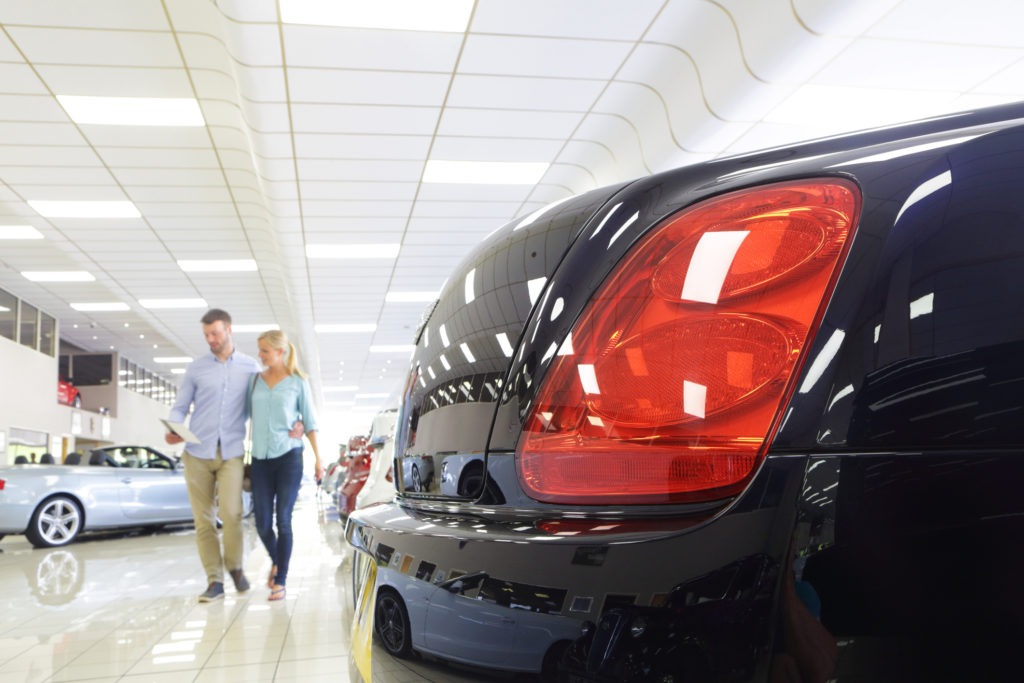 New-car registrations in the UK plummeted by 29.4% in 2020. Autovista Group senior data journalist Neil King explores the latest figures and the market outlook.

The lowest annual volume of new-car registrations since 1992 was recorded in the UK in 2020. The total for the year was 1,631,064 units, according to data released by the Society of Motor Manufacturers and Traders (SMMT). The UK emerged from its second lockdown on 2 December, only to see new regional restrictions imposed from 16 December. These led to a 10.9% year-on-year fall in new-car registrations during the month, with 132,692 new cars joining UK roads. Registrations of petrol cars (including mild-hybrid petrol) declined 32.9% in 2020, but still held a 62.7% share of the market. Demand for diesel cars (including mild-hybrid diesel) plunged 47.6%, accounting for just under a fifth of the market.

Registrations of hybrid cars grew by 12.1%. Following a dry spell as the UK Government removed grants for plug-in hybrids (PHEVs) in 2019, the technology enjoyed a resurgence in 2020, with registrations increasing by over 90%. Moreover, demand for battery-electric vehicles (BEVs) surged by 185.9% and electrically-chargeable vehicles (EVs) accounted for more than 10% of registrations, up from just over 3% in 2019. 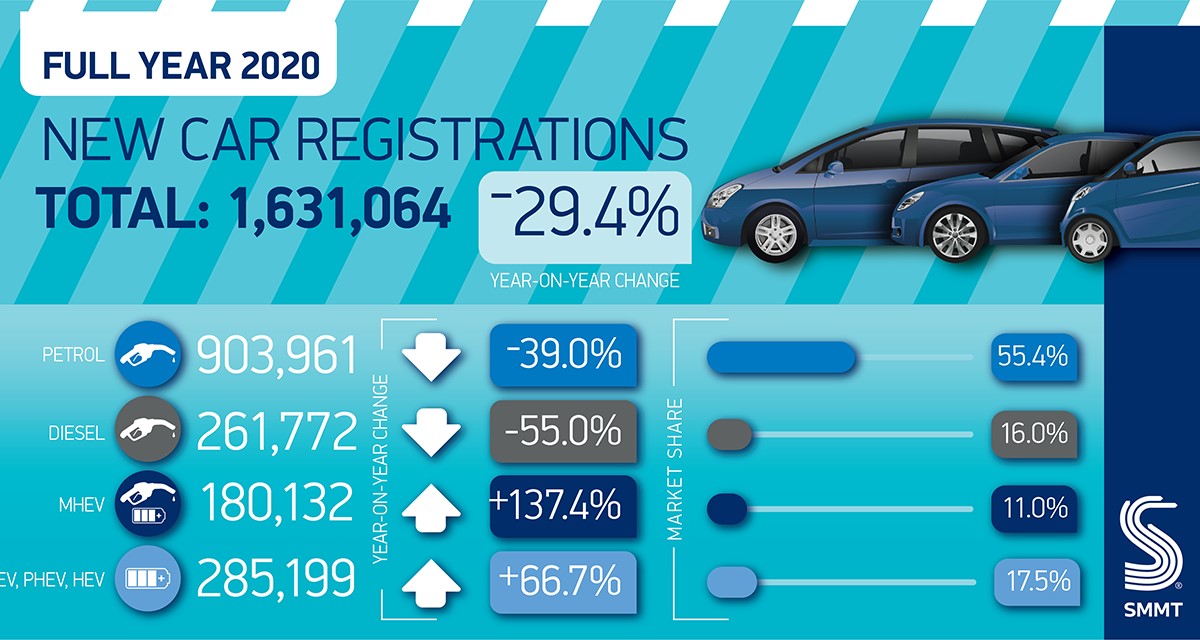 ′Encouragingly, there is room for further growth as most of these [EV] registrations (68%) were for company cars, indicating that private buyers need stronger incentives to make the switch, as well as more investment in charging infrastructure, especially public on-street charging,’ the SMMT stated.

Mike Hawes, chief executive of the SMMT, added; ′with manufacturers bringing record numbers of electrified vehicles to market over the coming months, we will work with the government to encourage drivers to make the switch, while promoting investment in our globally-renowned manufacturing base – recharging the market, industry and economy.’

The market contraction in December was in line with Autovista Group’s forecast for the month, and therefore for the year too. There is turbulence ahead as England and Scotland have reintroduced national lockdowns and there are ongoing restrictions across the rest of the UK. These measures will hinder the automotive recovery in the UK, at least in the short term. ′While click-and-collect can continue to provide a lifeline, it cannot offset the impact of showroom closures. With a vaccine programme now underway, however, in 2021 there is the potential to drive a recovery that would also support the UK’s environmental goals,’ the SMMT commented.

Autovista Group’s latest base-case forecast predicts a 25% improvement in new-car registrations in 2021, to just over two million units, and further growth of 7% in 2022. This is predicated upon vehicle deliveries being largely unimpaired and the car market being able to recover from current lockdowns and restrictions later in 2021. 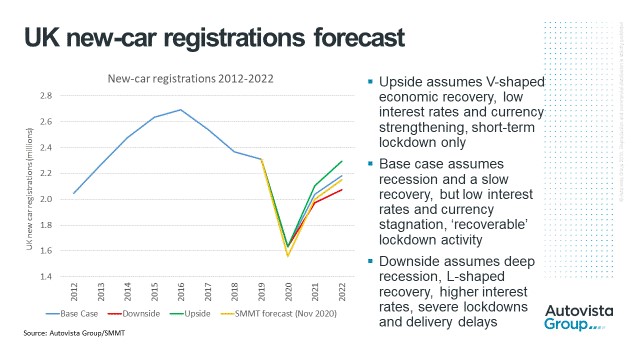 In a downside scenario, however, greater disruption to new-car registrations (and supply) is assumed for 2021, leaving limited opportunity for recovery of the losses later in the year. The forecast for this worst-case scenario is for UK new-car registrations to recover by only 21% in 2021, remaining below two million units, with further growth of only 5% in 2022.

In a more positive upside scenario, disruption to the UK automotive sector will be even more short-lived than in the base-case forecast, with dealers quickly overcoming supply shortages and returning to full operational capacity. The less-severe impact on the wider economy would also bolster new-car registrations in 2021 and beyond. In this scenario, the UK new-car market is forecast to grow by 29% in 2021, to over 2.1 million units, and expand by 9% in 2022.

Furthermore, following a year of unprecedented difficulties, the European Union and the UK reached an agreement on Christmas Eve for a Brexit deal. This has averted the dreaded ′no-deal’ scenario and accompanying tariffs on car imports and exports. ′Given seven out of 10 new cars registered in the UK in 2020 were imported from Europe, the continuation of tariff- and quota-free trade is critical to a strong new-car market in the UK,’ the SMMT emphasised.

Nevertheless, as the UK no longer follows the EU’s rules on production standards, checks on goods have been introduced. This, in turn, creates more paperwork and red tape, which may result in delays if goods arrive at ports unprepared. However, the deal does include a 12-month grace period on some elements of the ′rules-of-origin’ declarations, which require exporters to certify goods qualify as locally-sourced, allowing them to avoid tariffs. Businesses will have a year to obtain supporting documents form third-party suppliers, giving some companies more time to adapt.