At the end of September, Ford had registered 79,416 new Fiestas in the UK so far this year, making it the best-selling car, ahead of the Golf by almost 50%. To understand why, I tried the ST-Line at RRP £17,165, the middle of the price band for the model range.

The ST-Line is the ′lite’ version of the two sport models, the hotter being the ST. It is also in the middle of the range of eight engines, being a 1.0 litre 3 cylinder turbo producing 125bhp and 170 lb/ft of torque in this state of tune. Ford claim between 48 and 67 mpg for this engine. The ST-Line has its own front and rear styling treatment, with different grille, fog lights, bumpers and wheels, in this case 17″x7″ with 205/45 R17 tyres. Surprisingly, the three and five door models are exactly the same length at 4.065m.

The car is very well-equipped, with automatic headlights which are full LED with dynamic levelling and scrolling LED turn indicators. It has a heated windscreen but no auto wipers at this trim level. It has the same three spoke, leather-trimmed flat bottom steering wheel as the ST, which I found rather on the large side and festooned with no less than 13 control buttons. The S-Line also shares the ST’s leather trimmed gear lever with aluminium insert ′sport pedal set’ with stainless steel cappings and rubber inserts. At this trim level you have to make do with manual aircon, there is no automatic climate control.

All models have an ′NCAP Technology Pack’, comprising lane-keeping alert and aid, adjustable speed limiter, rear seatbelt reminder, and rear centre headrest. Additional safety features are optional but were not fitted to the test car. The ST-Line features a DAB radio with 6.5″ TFT touchscreen display with very large graphics making it easy to read, four front and two rear speakers, remote audio controls on the wheel, voice control, Apple CarPlay, Android Auto, Emergency assistance, hands free calling, GPS, Bluetooth, and USB connection. The central touchscreen display is incongruously tacked on like an afterthought, and not angled towards the driver, which is slightly annoying especially as the ″home″ button is on the far side on right-hand drive models. 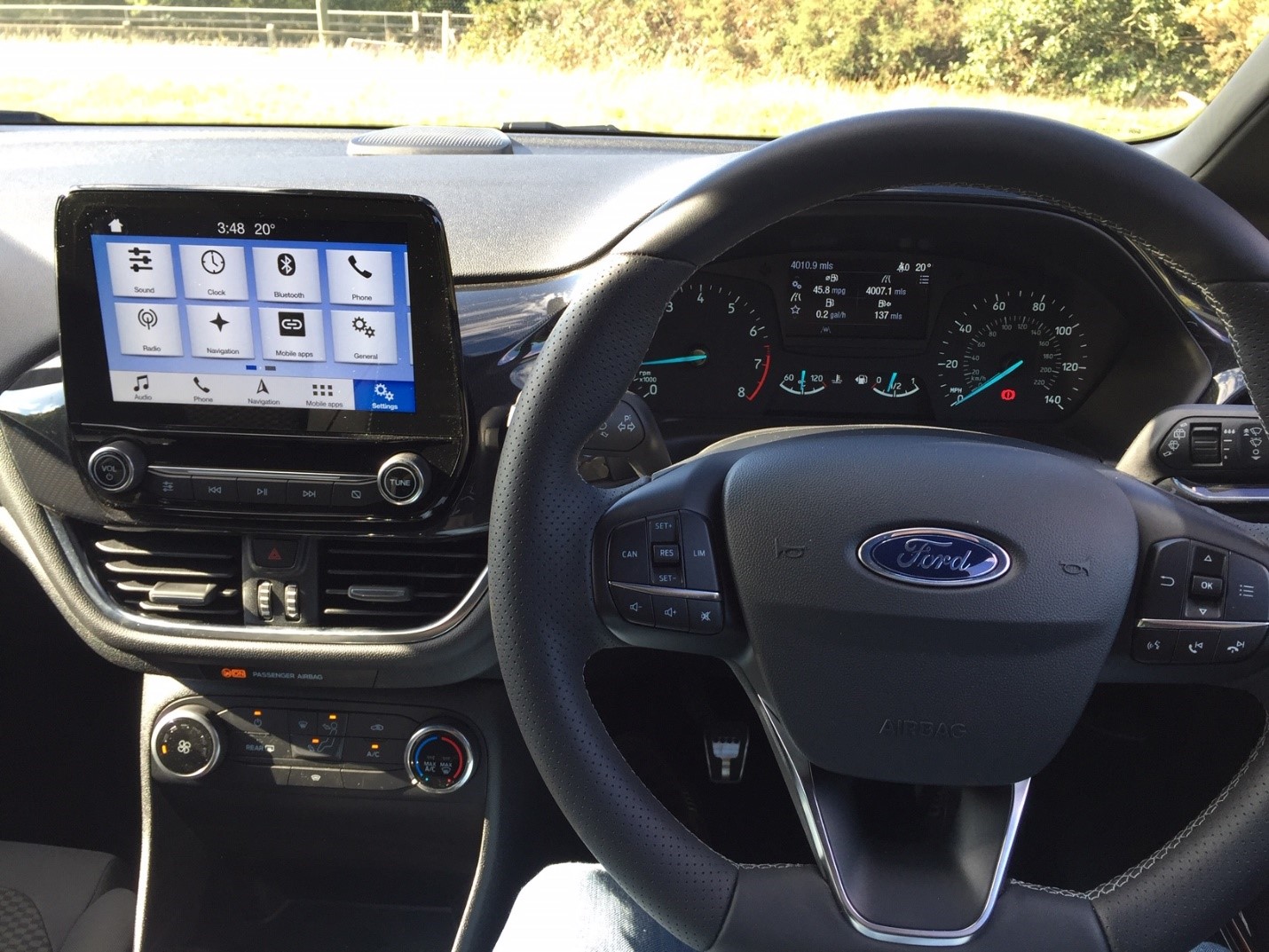 Externally, the Fiesta is a good looking car, with its front grille giving a more than passing resemblance to Aston Martin’s (and there the similarity ends), grey finished alloys, blacked out rear side windows and shapely rear. I did notice however some large panel gaps especially between the front panel and the leading edge of the bonnet.

And so to the driving. The car has excellent low speed acceleration as a result of its high torque figure, and feels light and nimble with sharp steering and grippy, poised handling. Sixth gear is very much a cruising gear, and the car needs to be over 55 mph to feel  comfortable in it. The Fiesta has a nice slick gearchange but it is not as satisfying as it should be because the engine’s pronounced flywheel effect makes it hang on to revs and either slows down the changes or leads to a jerk when you change up quickly.

The engine is quite refined and has a nice three-cylinder thrum that is not intrusive. There is a fair level of tyre and road noise, which I think you expect in a car at this level, accompanied by noticeable wind noise at motorway cruising speeds such that you no longer hear the engine.

The brakes are light but strong, progressive and positive. Unfortunately the seats were not very comfortable, pinching my shoulder blades, and I am not a large build. And whilst we’re being grumpy, the ride is pretty jiggly in ST-Line spec, both around town and also at speed. I suspect the non-sports models with smaller wheels are better in this respect, although the excellent handling and cornering agility are always going to compromise the ride quality.

Overall, I can see why the Fiesta is popular, and deservedly so, but my advice would be to go for a lower level version with smaller wheels as I just wouldn’t be able to accept the jiggly ride and the pinching in the shoulder blades. 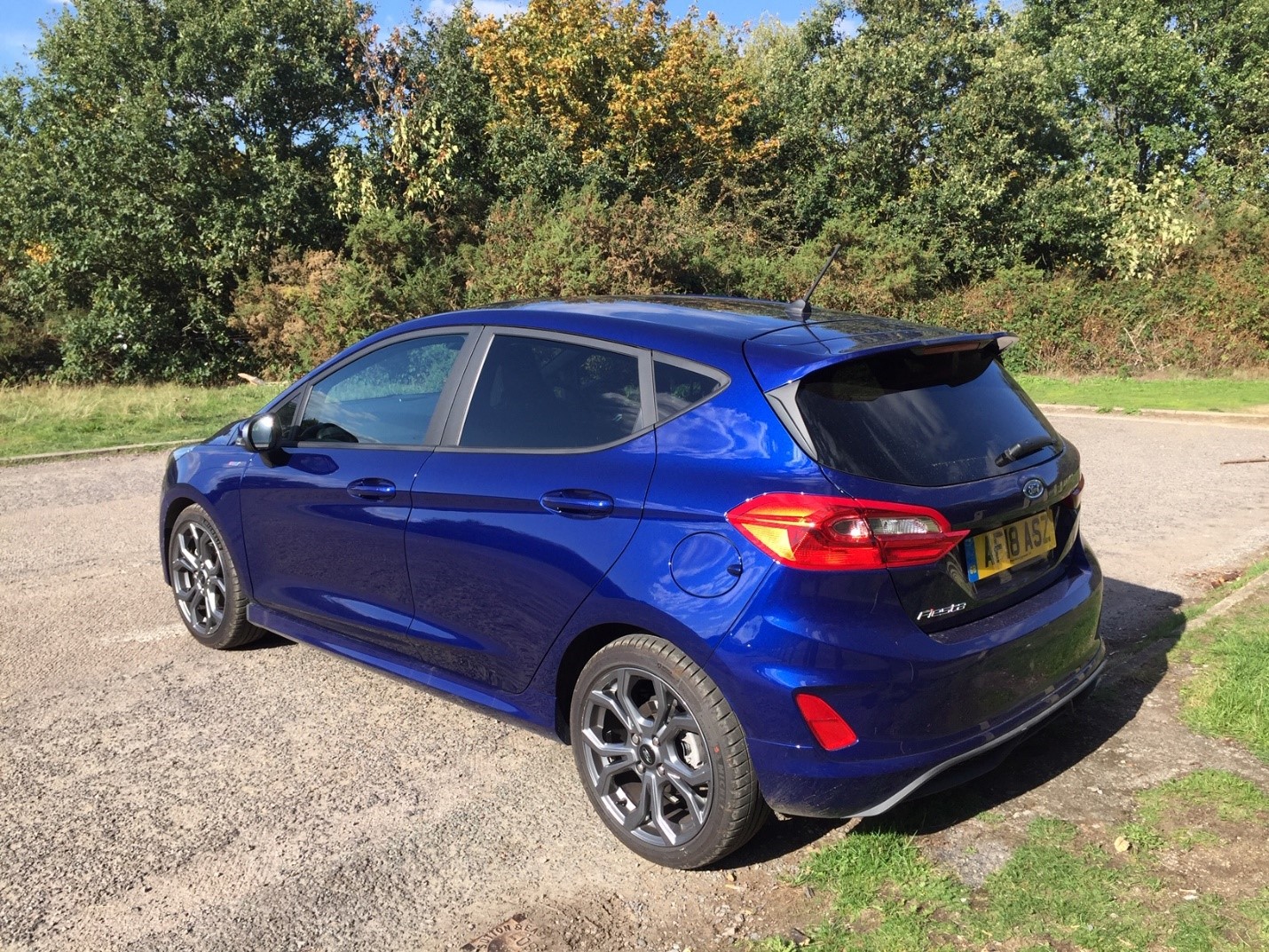