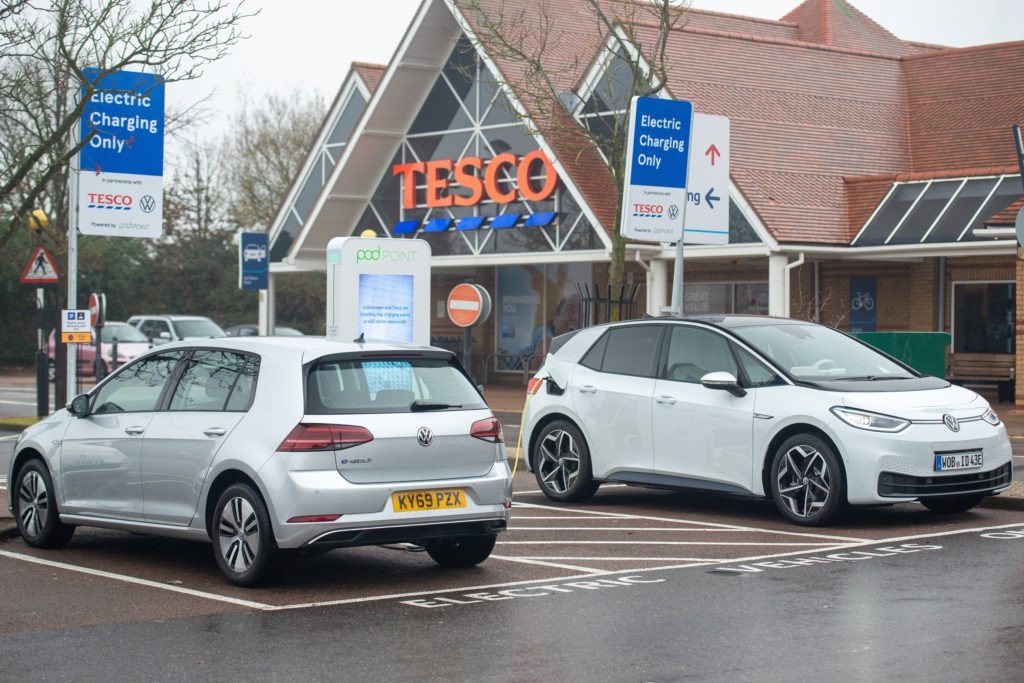 Volkswagen and Pod Point have started to roll out a new network of electric-vehicle chargers at Tesco stores in the UK.

At present, 100 stores across the country have Pod Point’s 7kW charging stations installed, with the three partners planning to have 2,400 points in total. The car company marked the announcement with the first showing of its ID.3 model in the UK.

The appearance of the new car, which arrives at dealerships in the summer, coincided with research by Volkswagen, which revealed the average Brit spends 50 minutes per week in a supermarket buying food and drink.

Electric car owners who plug in their vehicles could get around 22.5 miles of free charging from the 7kW points during that 50-minute period, enough time to do the weekly shop, the carmaker believes.

The partnership and the new ID.3, which has a range of up to 340 miles between charges, is part of Volkswagen’s drive to promote e-mobility and make electric cars more affordable for millions of people.

Its production is entirely carbon-neutral, while all electricity used to charge cars at Tesco comes from renewable sources.

′Volkswagen means the people’s car, and with the ID.3 we are making electric car ownership more accessible, said Geraldine Ingham, head of marketing at Volkswagen UK. ′This fantastic partnership with Tesco and Pod Point makes choosing an electric car even more attractive, allowing people to charge for free, all while going about their daily business.

′The chargers are designed for any electric-car owner to take advantage of. We are pleased to help break down any remaining barriers to opting for an electric car.’

Data from Pod Point has revealed the charging points were used more than 12,000 times in November, powering customers’ vehicles with almost 60,000 kWh of energy.

′Providing smart, easy-to-use charge points at this scale is likely to accelerate the transition to electric cars up and down the country. Being able to top up while you shop at so many locations makes it more convenient to go electric than ever before.’

Stores are looking to add charging points to their car parks tostrengthen customer retention and beat petrol-station forecourts to bringing in drivers of electric vehicles.

Swedish furniture store Ikea has come closer to its goal of equipping all German locations with fast-charging stations by 2020. After its most recent infrastructure offensive, 37 of the 53 branches in the country are equipped with such charge stations.

Lidl has been an provider of charging stations for quite a while, especially in Germany, Austria and Switzerland, while fellow food discount chain Aldi has announced that it wants to add charging points to a further 28 locations in Germany, alongside its 50 locations already hosting the technology. The business is especially interested in equipping stores located next to motorways.