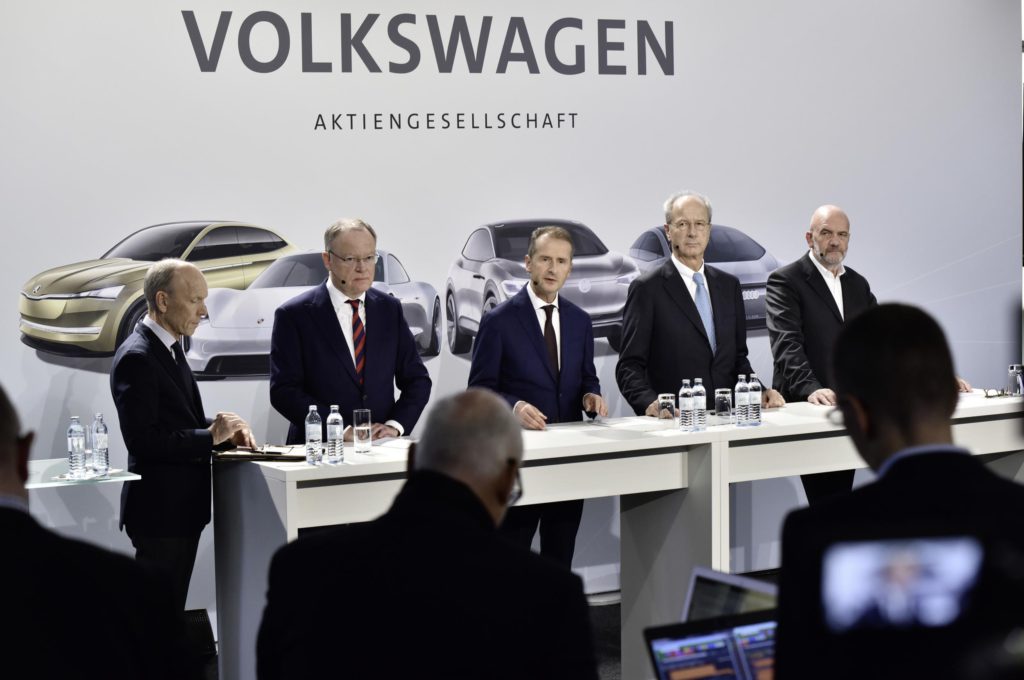 Volkswagen’s Supervisory Board met on 17 November to discuss the company’s future, with a number of proposals and directions on spending being formed.

The company has now said that in the next five years, to the end of 2023, it will spend around €44 billion on the future issues of e-mobility, autonomous driving, new mobility services and digitalisation in its vehicles and plants. This represents approximately one-third of the total expenditure for the 2019-2023 planning period.

The date of 2023 is two years before the company’s original plan to have an electrified version of every model in its range. With new CO2 rules being ratified by the European Parliament, with reduction steps in 2025 and 2030, the new target of 2023 gives the company time to benefit from the sales of electric and hybrid vehicles.

′One aim of the Volkswagen Group’s strategy is to speed up the pace of innovation. We are focusing our investments on the future fields of mobility and systematically implementing our strategy’, Herbert Diess, CEO of Volkswagen Group, said following the meeting.

As part of the discussions, Volkswagen has approved new plant assignment plans. Factories at in Emden and Hanover will be converted to build electric vehicles: models from the ID. family will begin rolling off the assembly lines there from 2022. To serve growth in Europe going forward, the Group will be expanding its production capacity post-2022 with an additional plant in Eastern Europe.

Oliver Blume, the Volkswagen AG Board of Management Member for Group Production, commented: ′We have redefined the strategic guideposts for future plant assignment. We are making our plants fit for the future. Among other things, this includes bundling cross-brand product families to maximise synergies and cost benefits. That is how we will realise the full potential of the Volkswagen Group.’

All-electric cars will begin leaving the assembly lines in Emden and Hanover from 2022: going forward, electric small cars and sedans from several brands will be built in Emden, while Hanover will specialise in the production of the ID. BUZZ family in addition to building vehicles with conventional drives.

′German plants are particularly well suited to making the transformation to the production of electric vehicles, given the high manufacturing expertise and qualification level of our employees. We are aligning the three plants in Zwickau, Emden and Hanover to our electrification strategy and thereby laying the groundwork for expanding our electric fleet and thus meeting the CO2targets,’ Blume continued.

Production of the Volkswagen Passat family will be moved to the Skoda plant in Kvasiny, Czech Republic, and these models will be built there together with the Å KODA Superb and Kodiaq from 2023. The Skoda Karoq and the SEAT Ateca, currently produced in Kvasiny, will be transferred to a new Group multi-brand plant, with sites in Eastern Europe being explored.

In addition to investment planning, the Supervisory Board also consulted on further future projects. In a statement, Volkswagen said: ′The talks with Ford about industrial cooperation announced earlier are progressing positively so far. The two companies complement each other very well regarding both products and regions. The joint development and manufacture of a range of light commercial vehicles are at the core of the envisaged cooperation.

′Volkswagen expects significant synergy effects from the potential to lower costs or increase performance via scales. Ford and Volkswagen will nevertheless remain competitors, as the proposed cooperation does in no way concern commercial, marketing or pricing strategies. Additional fields of cooperation outside the light commercial vehicle segment with the potential for expanding collaboration have also been identified.’

This further collaboration is expected to include sharing the German company’s electric MEB platform, with development costs being split. There is also the potential for Ford and Volkswagen to collaborate on autonomous vehicle development.