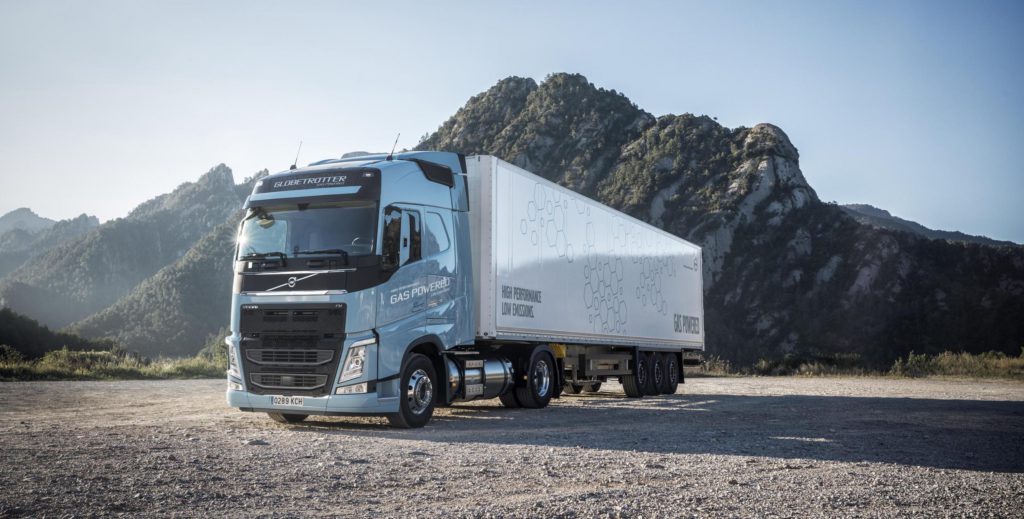 The company’s Volvo Trucks division is looking for ways to make the haulage and logistics industry more environmentally friendly without affecting performance. While some, such as Daimler, are developing electric trucks for short range deliveries, the Swedish manufacturer’s solution, adding LPG tanks to diesel vehicles, produces CO2 savings of around 20%.

According to the company, a firm that travels 120,000km a year can reduce CO2 emissions by 18-20 tonnes. Natural gas is also already available in a number of European countries, with the LPG infrastructure being expanded throughout the continent. Last year, over 264,000 heavy trucks were registered in the EU. According to Volvo, this shows the enormous savings potential of commercial heavy goods traffic globally.

Instead of an Otto cycle engine, which is the conventional solution for gas-powered vehicles, the Volvo FH LNG and Volvo FM LNG are powered by gas engines utilising Diesel cycle technology. This means that an operator who chooses gas can do so without compromising on driveability, fuel efficiency or reliability. Volvo’s 460hp gas engine delivers maximum torque of 2300 Nm while the 420hp version produces 2100 Nm.

Mats Franzén, product manager for engines at Volvo Trucks, comments: ′Our new trucks with liquid gas or biogas create a significantly smaller ecological footprint than diesel trucks. In addition, they are much more efficient than similar gas-powered trucks currently available on the market. Thus, even in heavy long-distance transport, gas becomes a genuine diesel alternative.’

The solution offers an alternative to electric powered trucks, and Volvo believes the two technologies can work together to improve the sector’s green credentials. Lars Martensson, director of environmental protection and innovation at Volvo Trucks, says, “For the long term, LPG is a first-class alternative to diesel in both regional and long-distance transport, where fuel consumption, payload and productivity are of paramount importance. The impact on the climate can be reduced much more, while transport and delivery traffic in the urban environment is less critical, which means that the idea of electric vehicles playing a bigger role in the future is not feasible with a single solution approach, but requires several parallel solutions, one of which is LPG.’

Meanwhile, Tesla is preparing for its electric truck launch on 26 October, as the US company plans to ′revolutionise’ the industry. While the company has only revealed teaser pictures of the model, showing its silhouette rather than the actual vehicle, there have been images circulating of a similarly shaped vehicle being transported close to Tesla’s headquarters. The truck looks, in traditional Tesla fashion, quite futuristic and clean.

In a Tweet in September, Elon Musk, Tesla’s founder, called the new truck a ′beast’ and confirmed that tests would be taking place prior to launch