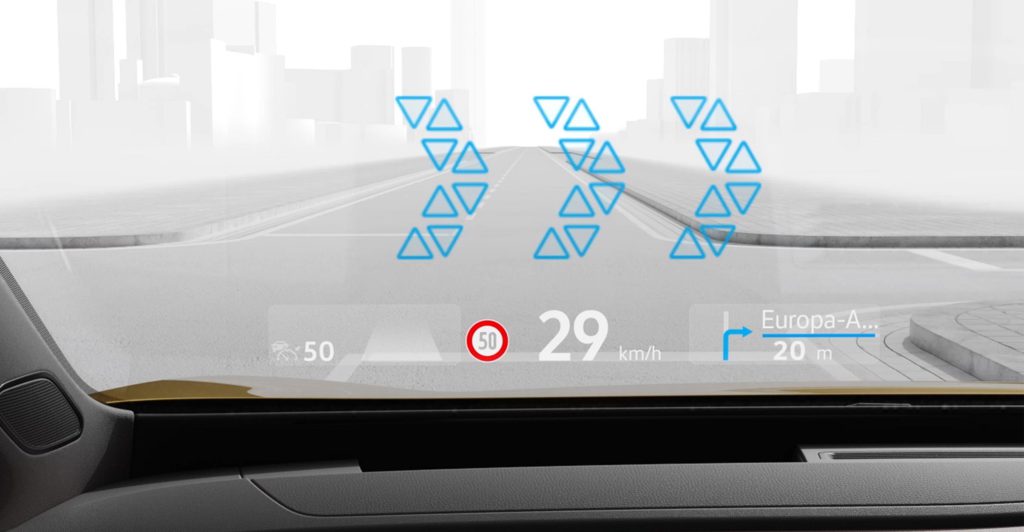 Volkswagen (VW) has confirmed the details of a futuristic feature destined for its upcoming vehicles. Its augmented reality head-up display might be a mouthful, but it effectively merges the real and digital worlds, providing the driver with all the essential information they could need.

While this technology looks to be a glimpse into a not-so-distant future, given the software difficulties VW has experienced this year, consumers may feel somewhat uncertain about the reliability of systems like these. While signs appear to point to the manufacturer having rectified these issues, it will need to go the extra mile to convince consumers these systems can go the distance.

The augmented reality head-up display projects information in two distinct ways, in two separate areas of the windscreen. A close-range window is located as a flat band closer to the steering wheel and appears to float around three metres in front of the driver. It shows speed, road signs, as well as assist and navigation symbols as static displays.

The second, larger dynamic display is located in the driver’s field of vision at a virtual distance of around 10 metres, with a diagonal measurement of around 1.8 metres. This far-range window shows information from the assist system as well as turn arrows, starting points and destinations from the satnav.

Positioned to display in line with the real world, the information is shown dynamically. For example, on approaching a junction where a turn should be made according to the navigation route, the driver will see two indications. First, an advance notification on the road level, and then three arrows at the junction. The closer the car gets, the larger the arrows becomes. At the same time, the arrow’s texture will fade, to allow a clear view of the road.

The lane-assist function is also displayed in the far-range window. If the driver gets closer to the boundary line without indicating, the line is displayed in orange. Two green lines also appear after turning on the automatic lane-keeping system. The display can mark the vehicle in front with a coloured stripe when the adaptive cruise control or travel assist is activated. If the system is turned off, the driver sees a red warning signal if they get too close to the car in front.

The system is powered by the picture-generation unit (PGU) built deep inside the dash panel. Beam bundles, generated by a bright LCD display, are transmitted onto two flat mirrors, and special lenses separate the portions for the close and far-range display levels. The carmaker explains that ′the flat mirrors deflect the beams onto a large, electrically-adjustable concave mirror. From here, the beams reach the windscreen and thus enter the driver’s field of view. The driver sees the symbols with the same sharp definition as the real world, at an apparent distance of just under 10 metres.’

But aside from all its high-tech capabilities, perhaps the most surprising detail about this new development is that it will not be featured exclusively in a high-end luxury model or an outlandish concept vehicle. It is instead destined to premiere in the compact segment, namely in VW’s latest battery-electric vehicles (BEVs), the ID.3 and ID.4.

′We have introduced a genuine innovation in series production,’ said Frank Welsch, member of the board of management for development. ′We have done this not in a premium vehicle, but in the compact models of the all-electric ID. family. Making pioneering technologies available to a large number of customers is a core competency of Volkswagen.’

While this follows the OEM’s strategy of ′offering high-tech features at affordable prices,’ the ID.3 starts at around €40,000 in major European markets like Germany, Spain and Italy. Considering this BEV has been designed to take up the mantle of the Golf, this is hardly an affordable price point, although the generous government incentives certainly help in Germany.

Introducing advanced features in a ′volume model’ is an admirable approach to take, but the cost of establishing this new electrified line-up is still weighing heavily on VW, meaning these models remain prohibitively expensive for many consumers. Therefore, it may be some time before staring at the road through a navigational display is a commonplace experience.