16 October 2018 Introducing a WLTP-based tax system that does not penalise buyers was always going to be a major challenge, but Finland is one of the first countries to attempt this. Its new tax table appears to work well for vehicles under 120 g/km under the old NEDC testing regime but for those between 120 g/km and 230 g/km, there are noticeable tax and list price increases. Other markets with C02-based tax systems – such as France, Spain and the UK – will undoubtedly be closely monitoring the transition in Finland. Finland seeks tax neutrality but further revisions are expected Only Finland and Germany have confirmed that, from 1 September, taxes on new cars are to be calculated using WLTP emissions figures. The additional tax liability is minimal in Germany as only â‚¬2 is payable for each g/km of CO2 over 95g/km. For example, if a car emits 20g/km more CO2 under WLTP testing than under NEDC, it will only be subject to an extra â‚¬40 in registration tax. Finland has introduced a revised tax table to calculate the registration tax of WLTP approved cars from 1 September as registration taxes can add up to 50% to the cost of a new vehicle. CO2 emissions are used to determine the percentage of the list price (including 24% VAT) that is payable as the registration tax, and so the simple implementation of WLTP figures would have added thousands of Euros to the price of some model variants. Figure 1: Finland, tax curve in NEDC values and the new WLTP-based registration tax curve 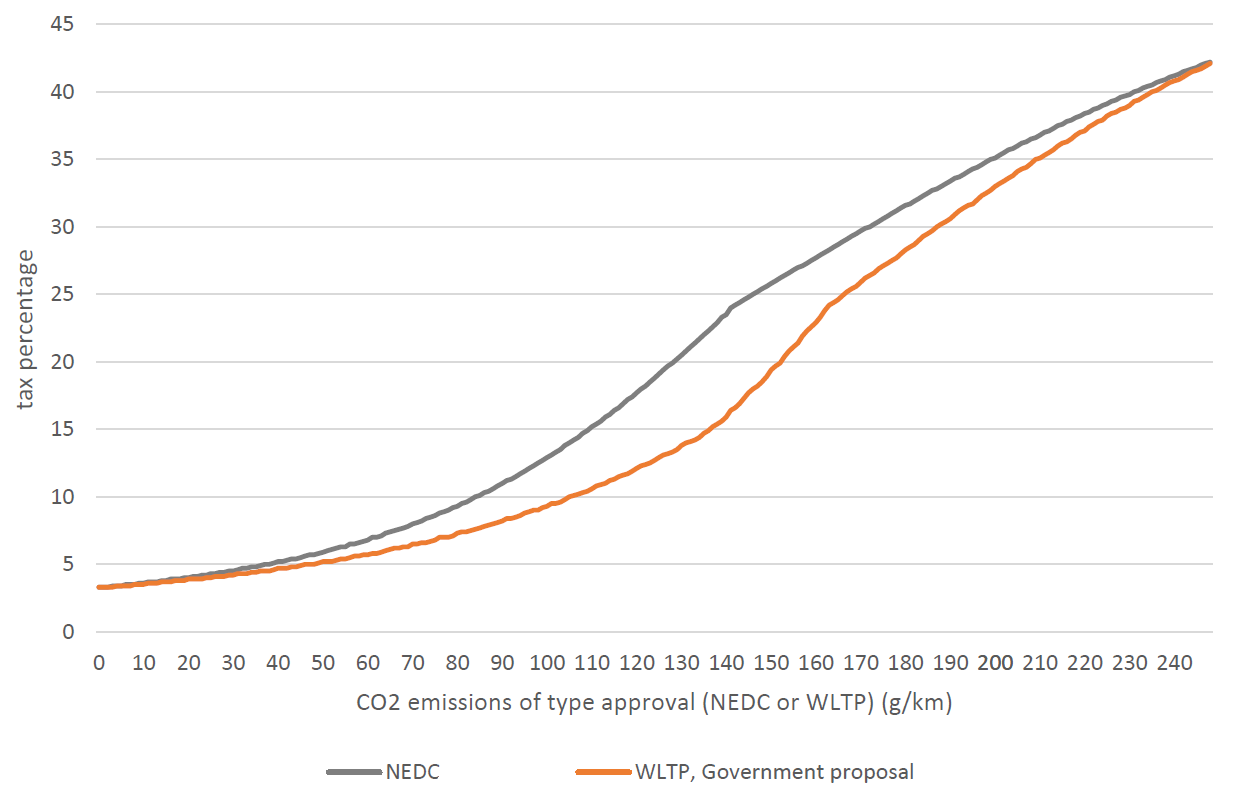 Source: Autotuojat (Association of Automobile Industry in Finland) The tax table was approved by the Parliament in Finland but the Ministry of Finance must assess the impact of the legislation change by the end of the year. If the transition is not tax neutral at different emission levels, the Ministry will need to prepare a new proposal for Parliament. In addition, the Parliament also agreed that WLTP type-approved cars ordered before 1 September could also be taxed according to the NEDC-correlated (NEDC-c) CO2 value and the existing tax table if the level of the registration tax was lower than using the new WLTP-based tax table. The automotive sector suggested that the tax table should be adjusted by an even factor of 1.21 above the emission level of 110 g/km. This aligns exactly with Autovista Group analysis of the average deviation between WLTP and NEDC-c emissions figures, which currently stands at 21%. However, the ratio actually ranges from being almost 40% higher to 6% lower and will invariably widen further as figures for more models are released. Simply adopting WLTP emissions figures would make the tax burden on many powerful cars lower than with NEDC-c figures. By contrast, many cars that are considered to be environmentally-friendly would face significant tax hikes. This defeats the object of the more sophisticated WLTP test, a phenomenon which Autovista refers to as the WLTP Power Paradox. In order to assess the effects of the proposed tax table, Autotuojat (the Association of the Automobile Industry in Finland) provided the Ministry and Parliament with WLTP values of new car models collected from importers and the Finnish type approval authority. The Association also presented alternative options to ensure the tax neutral result of the proposed legislation change. However, the Finnish Government deemed that the taxation should be based on objective sources, namely a study conducted by the Joint Research Centre of the EU Commission. Although the new tax table does reduce the average tax level by 22% compared to the NEDC tax table, the difference is not linear and the reduction decreases as the emission level rises â€“ again in line with the analysis of the deviation that Autovista has conducted. Autovista Group’s analysis As WLTP numbers are considerably higher than NEDC numbers, the Government has published the new tax table. Autovista Group has conducted extensive analysis of both the old NEDC- and WLTP–based tax liabilities and list prices on more than 2700 model variants. This analysis reveals what actually happens to the tax liabilities when moving to the new WLTP-based tax table. Figure 2: Imports in Finland and average changes to tax, list prices and CO2 figures by NEDC emissions category, WLTP versus NEDC 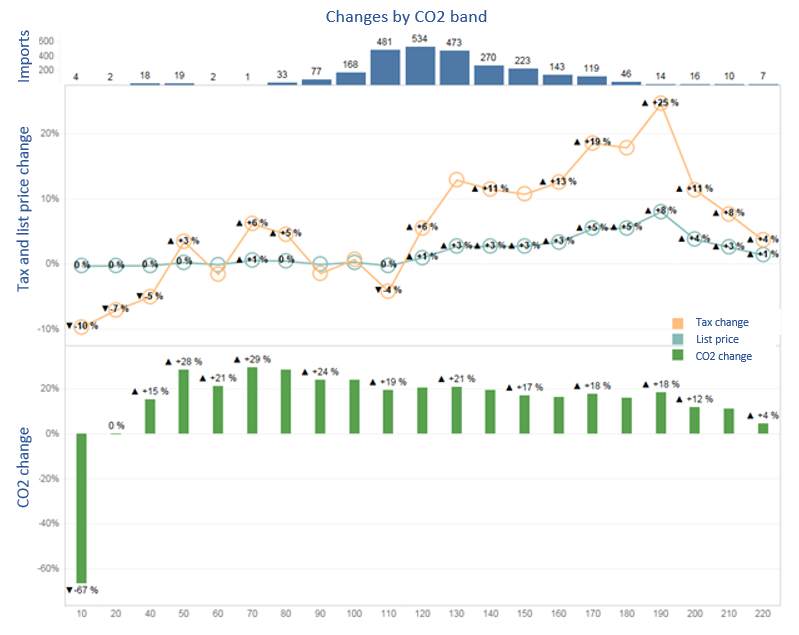 For vehicles under 120 g/km (NEDC), we found that taxes and list prices remain at about the same level and the tax liability actually drops slightly for cars with really low CO2 figures. However, between 130-230 g/km, the average tax increases quite clearly. Overall, this would result in a list price increase of about 1.5 % for all passenger cars, using regular volume weighting for the model variants considered. In many cases, the CO2 figure used for comparison is already NEDC-c, not original NEDC, and that means the true increase in CO2, tax and list price has actually been higher as there was an increase as NEDC figures changed to NEDC-correlated figures and again to WLTP figures from September. At the upper end of the emissions scale, from about 230g/km, the tax level is broadly the same. As discussed above, this will actually result in some powerful cars being taxed at a lower level than today. Therefore, as mentioned above, the Finnish Parliament has requested an assessment of the actual tax levels by the end of the year and has stated that the tax table should be corrected if the result is not tax neutral. For further details of the extensive analysis conducted by Autovista Group on the tax impact in Finland, please contact Markus Halonen, Head of Statistical Analysis at Autovista Group; markus.halonen@autovistagroup.com