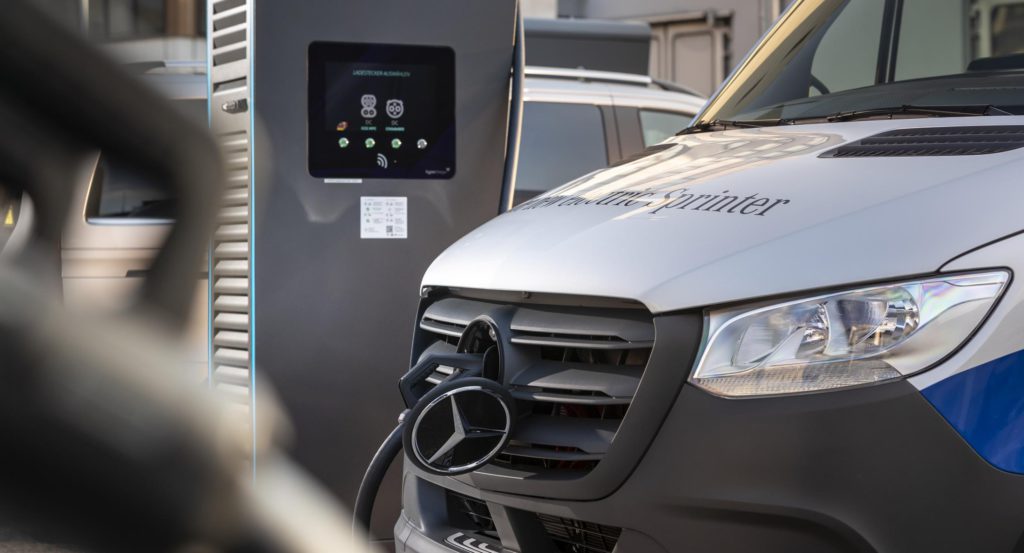 19 December 2019 Mercedes-Benz Vans has presented its second electric model, the eSprinter, to the trade press in six large German cities. The new model expands the Daimler division’s offer of emission-free light commercial vehicles, following on from the introduction of the smaller eVito late in 2017. The new eSprinter is intended to cover the broadest possible range of use in urban logistics, according to the Daimler release. The model is initially being offered as a panel van with a permissible gross vehicle weight of 3500 kilograms. Its maximum loading volume is 10.5 m3, the same as for the Sprinter with a combustion engine. Payload or range, efficiency or comfort As with the entry-level diesel engine, the electric drive in the eSprinter drives the front wheels with an output of 85 kW and a torque figure of up to 295 newton metres. The 47 kWh battery provides a range of 168 kilometres and a maximum payload of 891 kilograms, dependent on the vehicle configuration. A second battery option is available, which offers a lower utilisable capacity of 35 kWh and a reduced range of 115 kilometres but increases the maximum payload to 1045 kilograms. An integrated quick-charge function ensures flexibility as about 80% of the energy can be recharged within 30 minutes. The maximum speed can be set at either 80, 100 or 120 kilometres per hour. Four different modes are available to regulate the degree of recuperation of the energy generated during braking, which can be selected with paddle shifters on the steering wheel. Additionally, the three “E+”, “E” and “C” drive programs are selected by using a button in the centre console. Depending on the program selected, the driver can prioritise either comfort or efficiency. For example, climate control can be sacrificed to improve the driving range. The drive program and recuperation level settings are shown in the instrument cluster display. Electric van choice limited Whereas there is a proliferation of new electric cars coming to market, the choice of electric commercial vehicles remains rather limited, especially in the medium-van segment where the Sprinter sits. Deutsche Post DHL Group (DP) introduced the electric StreetScooter delivery vehicle in the small van segment, and whereas this was previously only used by the company for its own postal and courier services, it is now being offered to external customers. DP subsidiary StreetScooter GmbH and Ford-Werke GmbH entered a partnership to manufacture battery-electric medium vans back in 2017 and Ford started production late in 2018. Based on a Transit chassis, the medium-sized electric delivery van, known as the StreetScooter WORK XL, is fitted with a battery-electric drivetrain and a body designed and built to the German company’s specifications. However, this partnership may be in jeopardy as Ford will utilise the Volkswagen Group (VW) MEB electric vehicle platform as part of their broader collaboration. Separately, Ford has introduced a plug-in hybrid version of the Transit medium van but a fully-electric version has not yet materialised and no plans for the joint development of electric vans with VW have yet been announced. Renault offers electric versions of its Kangoo car-derived van and the Master large van but does not yet offer its Trafic medium van with electric drive. However, the French company is launching hydrogen options in its light commercial vehicle range as it pushes forward with its development of the technology. Advice on switching to electric Driving profile, operating time, range and charging time are important for fleet operators to consider feasibility, economy and efficiency before switching to electric drive. As part of its eDrive@VANs strategy, Mercedes-Benz Vans has introduced a service that includes advice on the vehicle selection, support with new tools and considers overall running costs. The eVan Ready app and the eCost calculator allow employers and drivers to use recordings of all journeys over a certain time period to find out whether an electric vehicle is suitable for their area of use and to calculate the potential savings. Questions also persist about the charging infrastructure, such as if all vehicles in larger fleets can be charged simultaneously at a depot and whether the current power supply is sufficient or if additional installations are required. With this in mind, Mercedes-Benz Vans has developed the eCharging Planner, which aims to answer these questions in three steps. In the first step, the conditions relevant to energy management are collected: this includes the necessary size of vehicles and vehicle fleet, the typical operating times, the potential energy consumption as well as the circumstances at the place of business. In a second step, the eCharging Planner considers the need for peripheral services and products such as a wallbox and intelligent charging management. The final step identifies the need for construction measures at the depot by considering the electrical parameters of grid-installed power, potential load peaks and the installation of power distributors. Ultimately, the eCharging Planner calculates how investment and operating costs of the conversion stack up against the possible savings in order to determine the amortisation period.
Companies Vehicle Manufacturers