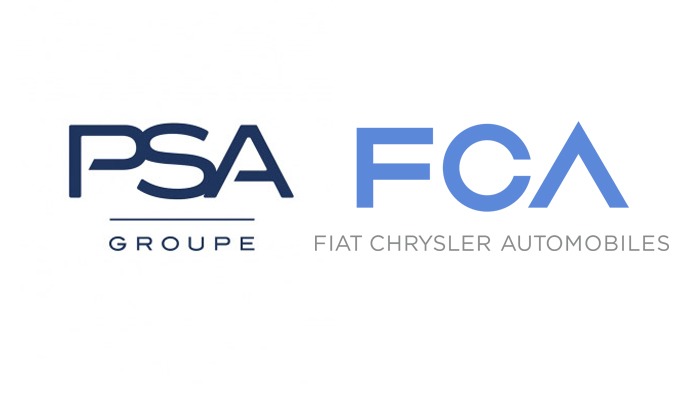 The companies believe that the transaction will be completed in 12-15 months, subject to shareholder agreement and regulatory approvals. For the time being, the two businesses will remain competitors.

The 50/50 merger will, on a simple aggregated basis of 2018 results, create a combined company with annual unit sales of 8.7 million vehicles worldwide, revenues of nearly €170 billion, recurring operating profit of over €11 billion and an operating profit margin of 6.6%. It will be the world’s fourth-largest carmaker, and Europe’s second biggest, moving PSA Group to within reach of Volkswagen Group’s market-leading position.

′The combined entity will have a balanced and profitable global presence with a highly complementary and iconic brand portfolio covering all key vehicle segments from luxury, premium, and mainstream passenger cars through to SUVs and trucks & light commercial vehicles,’ a joint statement reads. ′This will be underpinned by FCA’s strength in North America and Latin America and PSA Group’s solid position in Europe. The new Group will have a much greater geographic balance with 46% of revenues derived from Europe and 43% from North America, based on aggregated 2018 figures of each company.’

The reference to the US market highlights the importance that PSA Group places on the new merger for breaking back into the lucrative market. The French carmaker has been looking to re-enter the country with its Peugeot brand for the last few years and firmly believes that FCA’s presence, especially with its Chrysler and Jeep marques, will give it a platform to do so.

The ability to share platforms, engines and new technologies, including electric and autonomous, across multiple brands will also allow the carmakers to save money and become more efficient. Pooling the efforts of both businesses will also create a larger working group of experts to develop technology at a faster rate.

More than two-thirds of run-rate volumes will concentrate on two platforms, with approximately three million cars per year on each of the small platform and the compact/mid-size platform, the companies say.

′Our merger is a huge opportunity to take a stronger position in the auto industry as we seek to master the transition to a world of clean, safe and sustainable mobility and to provide our customers with world-class products, technology and services,’ says PSA Group chairman Carlos Tavares. ′I have every confidence that with their immense talent and their collaborative mindset, our teams will succeed in delivering maximised performance with vigour and enthusiasm.’

Mike Manley, Chief Executive Officer of FCA, added: ′This is a union of two companies with incredible brands and a skilled and dedicated workforce. Both have faced the toughest of times and have emerged as agile, smart, formidable competitors. Our people share a common trait – they see challenges as opportunities to be embraced and the path to making us better at what we do.’

The merged entity will benefit from an efficient governance structure designed to promote effective performance, with a board comprised of 11 members, the majority of whom will be independent. Five Board members will be nominated by FCA and its reference shareholders (including John Elkann as chairman) and five will be nominated by PSA Group and its reference shareholders (including the senior non-executive director and the vice chairman). At closing, the Board will include two members representing FCA and PSA Group employees. Carlos Tavares will be chief executive officer for an initial term of five years and will also be a member of the Board.

The news cements 2019 as a year of collaboration and highlights the needs and efforts that manufacturers must go to so they can compete against technology companies while improving sales and developing both electric and autonomous vehicles.

The deal will also come as a blow to Renault, which was approached by FCA earlier this year for a merger agreement, only for talks to fail due to interference from the French Government and alliance partner Nissan. The carmaker is now concentrating on rebuilding its fractured relationship with the Japanese carmaker, while also seeking a new CEO following the ousting of Thierry Bolloré. The PSA and FCA deal moves its domestic rival further ahead in the European market, whereas just two-years ago the companies were neck-and-neck, prior to PSA Group’s purchase of Opel.