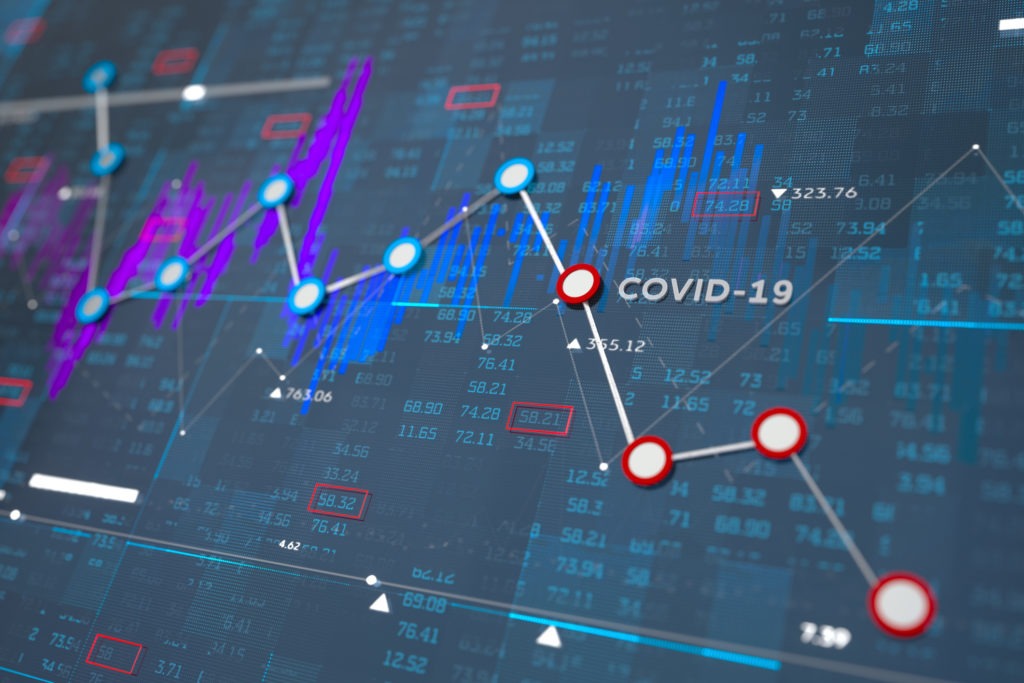 24 April 2020 Autovista Group senior data journalist Neil King explores the impact of the coronavirus (COVID-19) pandemic on new-car demand and discounting as well as the comparative resilience of used-car markets and residual values. The impact of the COVID-19 pandemic on new-car registrations is already stark as dealers and registration centres have closed across Europe. Furthermore, the crisis has resulted in lost earnings and unemployment for many potential car buyers, reducing their purchasing power, and a slump in consumer confidence. There are, however, already signs of this fall in confidence bottoming out in Spain and even potential green shoots of recovery, with tentative plans to slowly reopen businesses in the country after 11 May. Consumer confidence in the Big 5 European markets, January 2016 to March 2020 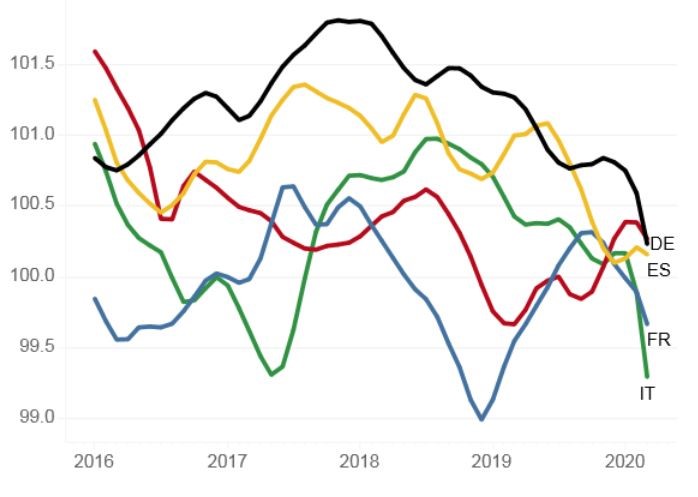 Source: Autovista Group/OECD In other good news, dealerships in Germany are allowed to resume selling cars as the Government relaxes its lockdown. Other countries will follow suit, with an accompanying rebound in new-car registrations, boosted in the short term by clearing the backlog as well as a release of pent-up demand. The impact on economies and new-car registrations in 2020 and beyond is extremely difficult to assess, as it depends on the duration of the crisis and the response measures taken by governments, both in tackling the situation itself and relaxing lockdown rules. Credit insurance and risk management company Coface forecasts that the global economy will suffer its first recession this year since 2009, with a contraction of 1.3%, after 2.5% growth in 2019. Coface expects recessions in 68 countries, compared to only 11 in 2019, and predicts a 25% increase in business failures worldwide, compared to just 2% in their January forecast. Business failures are expected to grow 18% in Western Europe, with the UK being hardest hit among the Big 5 economies (+33%). The UK is followed by a forecast 22% rise in business failures in Spain and 18% in Italy. Business failures are forecast to increase at a slower rate than the regional average in France (+15%) and Germany (+11%). Lower demand = higher discounting? In its April update, Autovista Group downgraded its base-case forecast to a 20% decline in new-car registrations in the UK in 2020, down from just 3% in March. Declines of a similar magnitude are to be expected in the other major European markets. In line with this COVID-19 adjusted outlook, this week PSA Group shared what it sees ahead in its Q1 revenue and sales announcement. It â€²now anticipates a decrease of the automotive market by 25% in Europe, 10% in China, 25% in Latin America and 20% in Russia.’ Beyond an expected initial surge in new-car registrations as dealerships reopen across Europe, demand will inevitably be lower than pre-crisis levels and so heightened discounting activity may ensue. Discount activity in Spain is already the highest among the Big 5 European markets and there are signs this is already increasing, with more expected to follow. Fiat, for example, is offering a 33% discount on online orders in Spain, with a first payment postponed to September. In another initiative, discount vouchers for the leasing of several cars are available through Groupon. 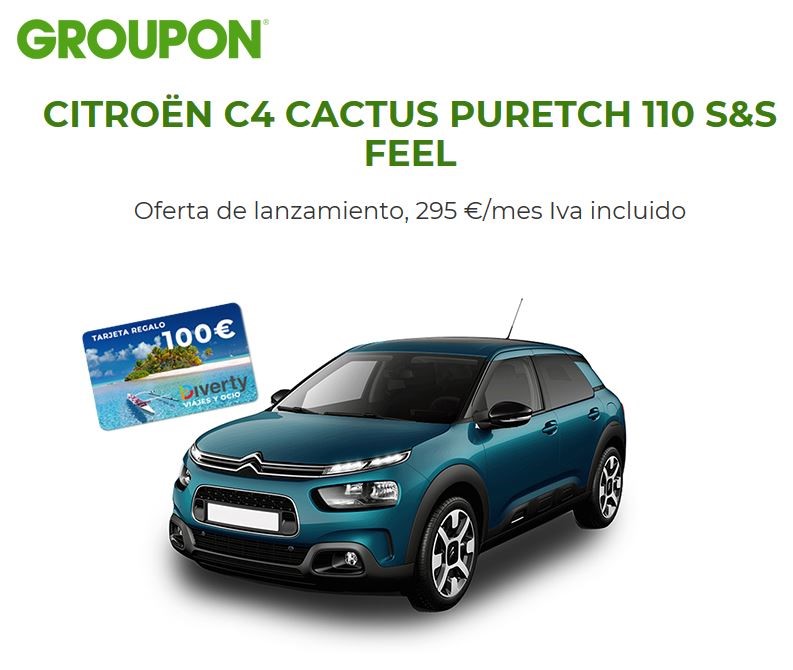 Source: rentingcarfacil.com Ana Azofra, valuations and insights manager at Autovista in Spain commented: â€²I hope that high discounts would only be a bad practice in the short-term. The current production stoppage will reduce stock levels and this will give manufacturers and dealers a break.’ In Germany, Autovista Group has not yet observed significant discounting on new cars, but Automobilwoche reports that Ferdinand DudenhÃ¶ffer, leader of a market study by St. Gallen University, expects â€²a storm in the coming months because the weak sales so far would have to be boosted in the rest of the year. Customers should currently wait and see, because the slump can only be prevented with better offers.’ Andreas GeilenbrÃœgge, head of valuations and insights at Schwacke, commented; â€²Due to the production stop and the already high discounts on some brands, I don’t expect massively higher discounts in the second half of the year. Possibly at the very end of the year, OEMs may feel some threat and push the market but currently all of those we have spoken to confirm that there are no plans for massive incentives. They are all trying to support their dealerships with longer payment terms, reducing sales targets, and supporting or even enforcing stock reduction.’ Used-car and residual-value resilience Used-car markets have proven more resilient, with year-on-year declines of 34% in France and 62% in Italy reported for March, compared to downturns of 72% and 85% respectively in new-car registrations. The impact on residual values (RVs) has also been marginal so far, although this is largely because dealers have not been open, other than for online orders, and so price adjustments would essentially be an exercise in futility. The largest decline in RVs has, not surprisingly, been in Italy, which has also suffered the greatest contraction in new-car registrations. Even here, RVs are only 1.6% lower than at the start of February.

Source: Autovista Group â€“ Residual Value Intelligence Coronavirus Tracker There are already positive signs in Austria for example, where dealers have reopened, resulting in growth in the volume of used-car adverts being newly created on online portals between 13 April and 19 April and, moreover, being removed . This reflects not only the return of dealer sales activity but also the release of pent-up demand after weeks of closures. A similar resurgence is expected in Germany as dealerships reopen there too, although the Government did not set a specific date as the timing will be down to individual states. Other countries will follow as lockdowns are relaxed and dealerships reopen.

Source: Autovista Group â€“ Residual Value Intelligence Coronavirus Tracker Increased discounting of new cars would obviously not bode well for RV developments. However, the economic situation will likely lead many consumers to tighten their belts and seek out used cars instead of new, as they represent better value for money. The production stoppages and considered approach to restarting manufacturing will also constrain the supply of new cars, including demonstrator examples, and this could also help the RVs of young used cars. GeilenbrÃœgge added that â€²it is expected that newly produced vehicles will not appear at dealerships earlier than autumn 2020. In addition, it is still unclear if the parts supply will be fully available. So there will be a slight dip in new vehicle supply and additionally in young used cars, further supporting their RVs.’ Dealerships are currently meeting (lower) demand with stock vehicles, in a resurrection of the â€²inventory burn’ that took place in the wake of the 2007-8 global financial crisis, whereby registration and production volumes uncoupled globally. In a follow-up article, King will explore the abstract impact of the COVID-19 pandemic on vehicle demand and electromobility, considering societal changes such as aversion to public transport, increased working from home, and the rise in online sales and home deliveries. Autovista Group’s latest thinking, insight, and data on the coronavirus pandemic and its impact on the automotive industry can be found here. Be the first to know when we publish something new – sign up to the Autovista Group Daily Brief.