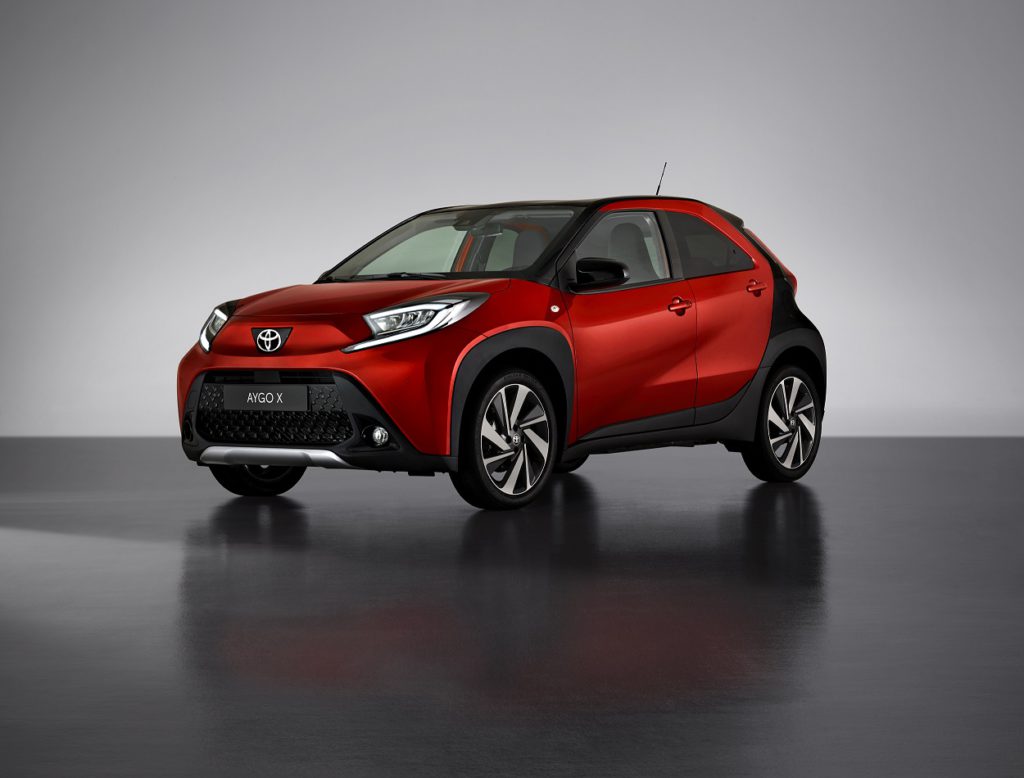 The Toyota Aygo X serves as a replacement for the Aygo city car in Toyota’s European lineup. It one of the few A-segment models with SUV/crossover styling and proportions.

The Aygo X has a great aesthetic, with a harmonised exterior and interior. It handles well, thanks to a good chassis and 17-inch or 18-inch wheels, which are standard across all trim lines. The car will be easy to park in the city with its very tight turning circle, but rear visibility is compromised by the design, which makes the boot loading sill high.

Higher ground clearance makes front access into the car easy but getting into the back seats is more difficult due to the narrow rear-door opening. Inside, rear legroom is limited too, although this is a common problem in the city-car segment. While many rivals offer electric windows, the Aygo X’s hinged-rear windows will be safer for small children and are not unusual in the A-segment.

Sleekly styled. the model shares its platform with the B-segment Yaris and has grown in length by about 24cm, to 3.7m, compared to its predecessor. The car is also slightly wider, and the crossover styling makes it a few centimetres taller too. This has a positive effect on seating space, as well as the boot, which holds 231 litres. Although this is about 20 litres smaller than in the Kia Picanto and the Hyundai i10, it is still a competitive size, and 60 litres more than in the Aygo.

There are no hybrid or electric powertrains available for the Aygo X, only a one-litre petrol engine. However, there is a choice between a five-speed manual gearbox or a CVT automatic transmission. The three-cylinder petrol engine, carried over from the Aygo, hums a little and is noisy at higher speeds. Taking 14.9 seconds to accelerate from 0 to 100kph, the model appears to be down on power compared to the competition, but usage costs will be low, with official fuel consumption of only 4.8 litres per 100km.

The interior is dominated by an egg-shaped central display that houses a multimedia system with either a seven-inch or nine-inch touchscreen. Standard equipment includes LED daytime-running lights, a rear-view camera, and Toyota ‘Safety Sense’, which features systems such as collision warning, brake assistant, lane-change warning, adaptive cruise control, high-beam assist and traffic-sign recognition.

The Aygo X is the freshest offering in the A-segment and competes against older models – the most recent addition was the third-generation Hyundai i10, which launched in 2020. There are also fewer A-segment models in the market, especially since the withdrawal of the former Aygo’s siblings, the Peugeot 108 and Citroën C1. 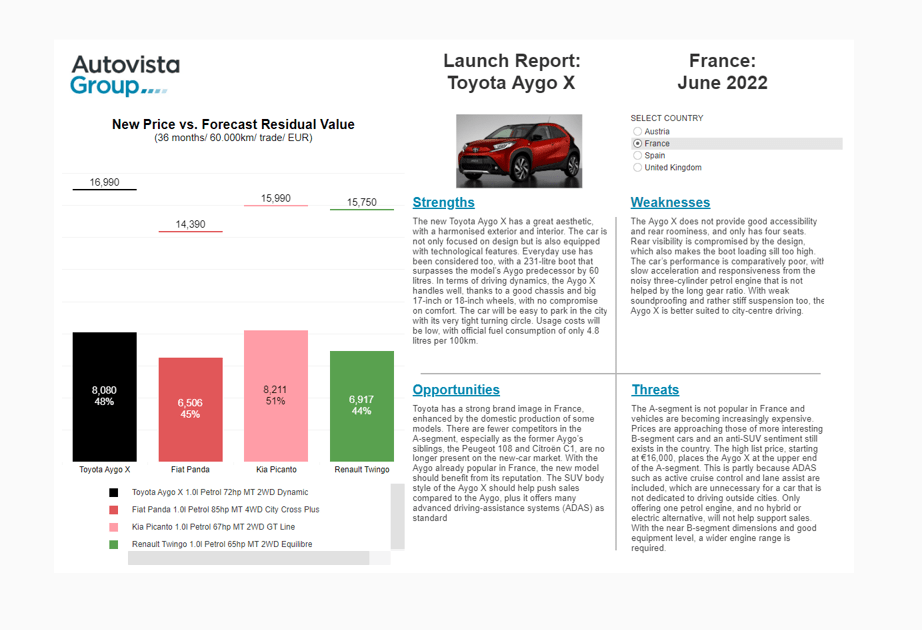 However, the comparatively high list prices of the Aygo X position it at the upper end of the A-segment. This is partly because advanced driver-assistance systems (ADAS) such as active cruise control and lane assist are included as standard, which are arguably unnecessary in a car that is not dedicated to driving outside cities.

There are cheaper city-car alternatives for consumers that do not feel the need for a higher driving position, and this segment is often more influenced by cost than others. However, the Aygo X does benefits from Toyota’s reputation for producing high-quality, reliable cars, and enjoys strong brand loyalty.

City cars, with their relatively low weight and compact dimensions, are more environmentally friendly than B-segment cars and SUVs. But there is limited room for demand growth in both the new and used-car markets, due to their low versatility and specific use.

However, due to increasingly stringent emissions regulations and safety requirements, they are becoming increasingly expensive, with prices approaching those of B-segment models that offer greater versatility. A case in point is the iconic Fiat 500 that, despite being a smaller rival and a different concept to the Aygo X, is available as a battery-electric vehicle but with B-segment pricing.

There are not many crossover/SUV-style vehicles in the A-segment, although that is likely to increase due to their popularity and the need to accommodate batteries for hybrid and electric powertrains. Nevertheless, as city cars can hardly be produced at an attractive end-customer price, especially with electrified powertrains, they are even threatened with extinction.