All of Europe’s big five automotive markets showed signs of improvement in February, but Russia’s invasion of Ukraine will curtail the anticipated 2022 recovery. Although a significant impact on new-car sales, i.e. order intake, is not expected, the conflict is already adding further disruption to beleaguered automotive supply chains.

This is causing production stoppages far beyond Russia and Ukraine, with numerous carmakers affected. These include BMW (as well as its Mini operations in the UK), and Toyota, which has announced ‘additional production suspension in March’ at one of its plants in Japan.

Volkswagen (VW) Group’s Dresden and Zwickau plants in Germany are also contending with component shortages. Audi and Porsche production in the country, as well as Skoda output in the Czech Republic, is similarly afflicted.

‘The war in the Ukraine is dramatic and causes human tragedy and economic upheaval that we thought we had overcome throughout years of multilateralism and diplomacy,’ said CEO Herbert Diess at VW‘s annual earnings press conference in Wolfsburg on 15 March.

These disruptions will impact deliveries of some new cars and delay registrations in the short term. Accordingly, Autovista24’s new-car registration outlooks for the leading west European markets have been subtly revised for March, with greater reductions reflected in April.

However, the supply-chain issues will inevitably persist in the coming weeks and months. For example, the Financial Times reports that Ukraine ‘accounts for about a fifth of Europe’s supply of harnesses, which also come from other parts of eastern Europe as well as north Africa, according to estimates from AutoAnalysis.’

In response to a question at the VW media conference, Diess commented that ‘the dominant constraint is indeed wiring harnesses. We receive wiring harnesses from Ukraine from nine to 11 plants. Nine of them are working on reduced capacity so that means we are able to produce in most of our plants, but in a reduced rate of capacity.’

‘This is why we initiated relocation programmes for all those components, but which will take time. Currently, we are trying to get the most out of the wiring-harness production in Ukraine but in parallel, right from the start of the conflict, we started to work on alternatives, which are on the way. This affects most of our German plants.’ However, Diess added that ‘the overseas plants and also the West European plants in Spain and Portugal are not affected.’

Furthermore, the anticipated improvement in the supply of semiconductors that was factored into Autovista24’s forecasts, especially in the second half of the year, is jeopardised. Reuters reported on 11 March that ‘Ukraine’s two leading suppliers of neon, which produce about half the world’s supply of the key ingredient for making chips, have halted their operations, threatening to raise prices and aggravate the semiconductor shortage.’

Autovista24 assumes that the disruption to car production will reduce throughout the year, albeit after securing alternative supplies of critical raw materials and/or components that are sourced from Russia and/or Ukraine. Nevertheless, the monthly forecasts for new-car registrations have been revised downwards in all five of Europe’s major markets from May until the end of the year. 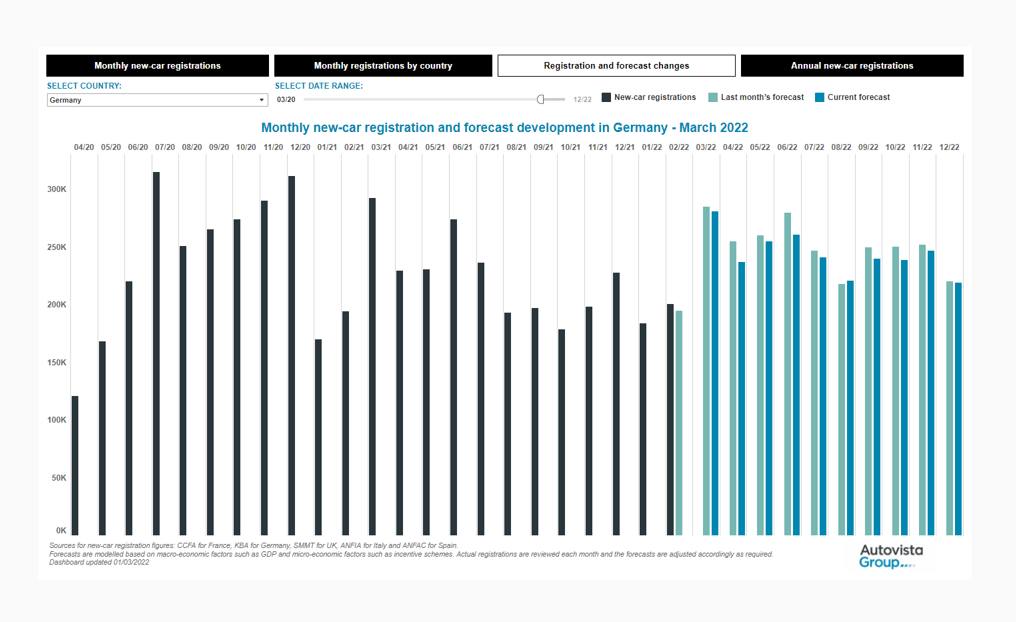 As not all losses are forecast to be recovered by the end of the year, the net effect is that the combined 2022 forecast volume for the big five markets has been reduced from over 8.9 million units last month, to below 8.6 million units. This marks a reduction of over 360,000 units, or a 4.1% downgrade, and equates to year-on-year growth of just 4% in 2022 after two consecutive annual contractions of 25.4% and 2.2%.

The previous positive 2022 forecasts for France, Spain and Italy are now negative, albeit only modestly. Autovista24 now expects around 2.8 million new-car registrations in Germany this year, an increase of 7.7% year on year, but this follows the 10% downturn in 2021. The previous forecast of 1.9 million new-car registrations in the UK has been slashed to 1.83 million units, although this still represents year-on-year growth of 11.3%.

Displacement into 2023 and beyond

With the expectation of even more new-car registrations displaced into 2023 than previously assumed, double-digit growth is expected in the five countries next year. However, Autovista24 forecasts that the new-car markets will all be at least 8% smaller than in pre-pandemic 2019.

A return to comparative normality is unlikely until 2024, a year which is expected to benefit from a pull-forward effect as automotive manufacturers and consumers seek to register cars ahead of the EU Commission’s target of a 25% reduction in CO2 emissions in 2025, compared to 1990 levels.

Autovista24 expects a modest correction in 2025, except in Spain as the anticipated slower recovery means the market will be the furthest adrift in 2024.

There are significant downside risks to this challenging forecast. The outlook ultimately depends on the duration and severity of the conflict in Ukraine, and whether it extends beyond the country’s borders. Unlike previous crises, such as the global financial crash of 2008-2009, the registrations outlook for western European markets hinges far more on new-car supply than any economic impact on new-car sales. 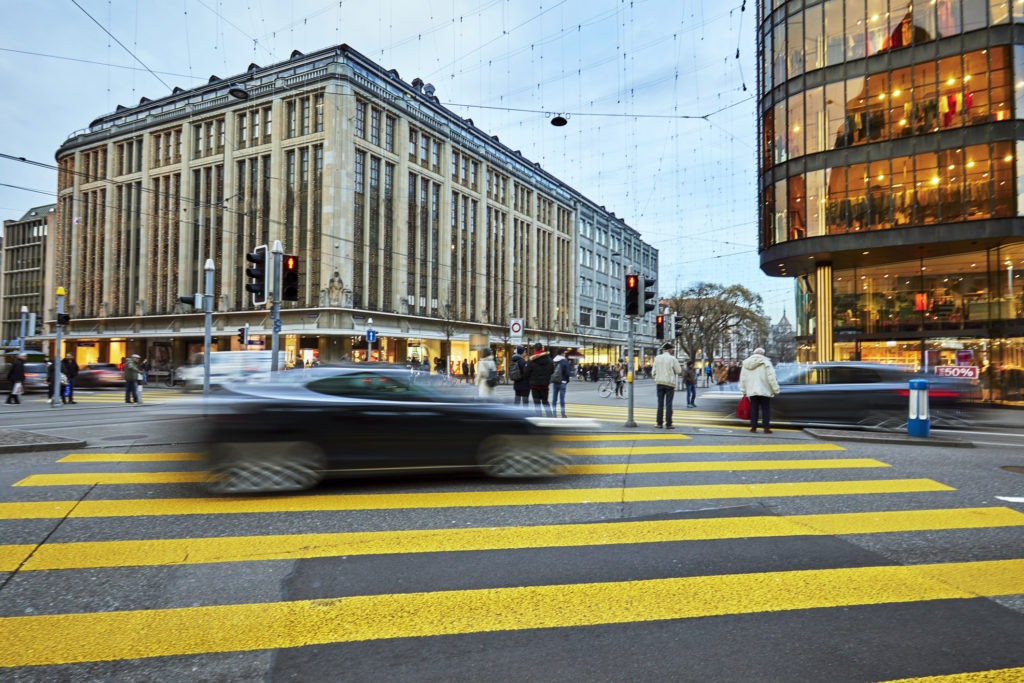